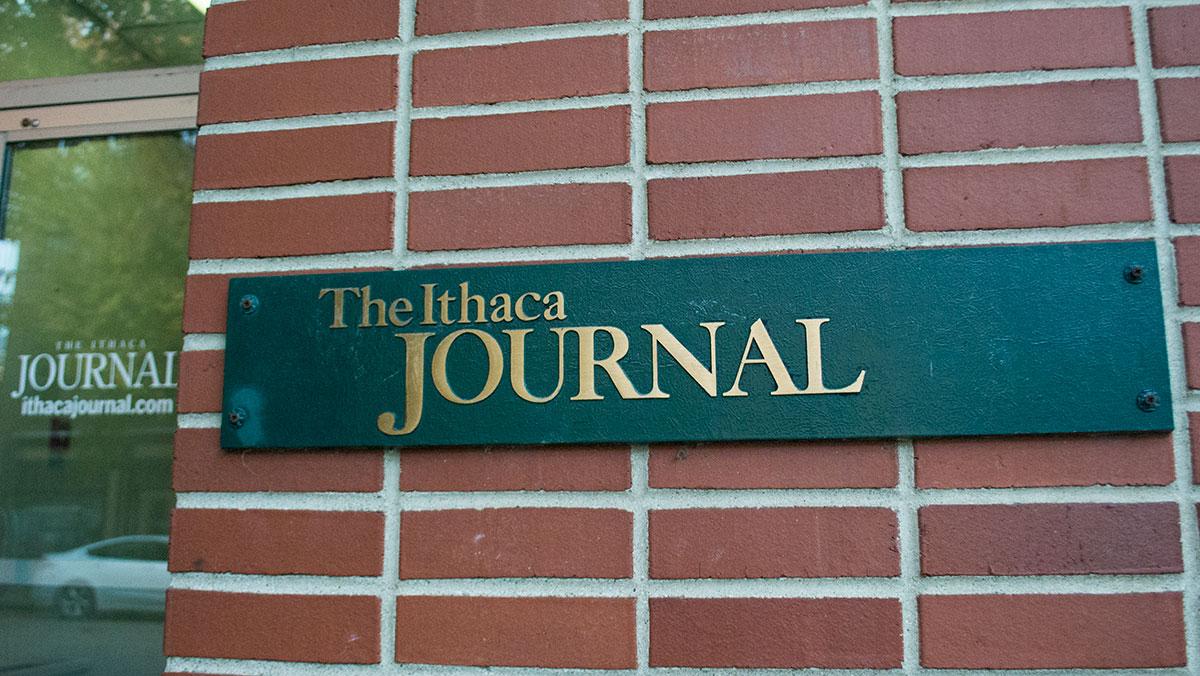 Eve Mahaney/The Ithacan
The Ithaca Journal is down to only one reporter in the newsroom after a handful of staff cuts and changes.
By Madeline Veneziano — Staff Writer
Published: November 15, 2016

Recent layoffs at The Ithaca Journal reflect a continued shrinking of the staff, which is now down to one reporter in the newsroom.

On Oct. 25, the Journal laid off two long-time staff members, photojournalist Simon Wheeler and editor Lois Wilson. This lined up with a decision by Gannett, the company that owns the Journal, to reduce its workforce by about 2 percent to help manage costs from a decline in advertising revenue.

Kelsey O’Connor ’13, rapid response reporter, announced on Twitter she was leaving the Journal on Nov. 11. O’Connor did not reply to a request for comment. Matt Weinstein, regional active life reporter and remaining staff member, declined to comment.

Neill Borowski, executive editor of the Ithaca Journal, Binghamton Press & Sun-Bulletin, and Elmira Star-Gazette, said in an email that The Journal is hiring to fill an opening in Ithaca, and an additional reporter is being moved from Binghamton to Ithaca.

“The goal is for us to continue to cover the Ithaca area as we have in the last year,” Borowkski said.

Last year, four staff members from the Journal accepted a voluntary early-retirement incentive package Gannett offered, including Thomas Fleischman, then a sports writer for the Journal.

Fleischman worked at the Journal for almost 30 years and said there were about 25-30 people in the newsroom when he started. He said the most drastic change has happened over the past decade.

“The reality of the business and the industry sort of sank in and declined sharply in the last 10 years,” he said.

Nick Reynolds, another former writer for the Ithaca Journal who is now the managing editor of the weekly Ithaca Times, said growing up he read the Journal, and he was initially excited to work there. As the numbers in staff dropped, so did morale, Reynolds said.

“At some point this summer, morale had just hit a point that was so low it became, at least for me, impossible to do my job,” he said.

Rick Edmonds, a media business analyst from the Poynter Institute, a nonprofit journalism education organization, said loss of advertising is the biggest reason for seeing layoffs at newspapers. He said advertisers, including local stores, have more options for their advertisements, such as Facebook, Google, and other forms of digital media. He said whether or not Gannett is a good place to work likely varies by employee.

“The organization overall has a solid commitment to journalistic quality, but that doesn’t necessarily mean that it’s a happy situation for everybody in all of the newsrooms, ” he said.

Some potential negatives that could come from working at Gannett, Edmonds said, are the small staff sizes and the nervousness of when the next cut will be and whether it would affect someone working there. Edmonds said some of these negatives are general to American newsrooms.

“What staff there is can focus on local stuff, and then the local papers can participate in part of being the bigger USA Today network,” Edmonds said.

Additionally, Hamula said while digital advertising is increasing, it is not doing so at a rate that makes up for what newspapers are losing in revenue in traditional print advertising.

From 2014 to 2015, the newspaper industry has seen a decrease in daily publications by 6.7 percent, according to data from the Pew Research Center. Mead Loop, associate professor of journalism and documentary studies program coordinator, said online startups such as the Ithaca Voice sometimes pop up when newspapers like the Ithaca Journal pull back.

“We’ve seen these startups try to fill that void by covering communities that have been forgotten or left alone,” he said.

Hamula said he thinks readers will see fewer local stories in the paper as a result of these staff cuts.

Fleischman said he could not speculate whether the Ithaca Journal may shut down or consolidate with the other Gannett papers.

Edmonds said companies like Gannett usually have services such as copy editing and layout work done at a regional center that services multiple papers. For the Ithaca Journal, this regional center is in Johnson City, which also does operations for the Binghamton Press & Sun Bulletin and the Elmira Star-Gazette.

Reynolds said Gannett issued corporate mandates that were not tailored to the Journal’s needs. One example was requiring a video to accompany every story produced by the Journal. Reynolds said this demand distracted reporters from other important things and put undue stress on their resources.

“When you require someone to produce a video, and write a story, and shoot a photo with every piece you produce, that’s not something easily done,” he said.

With regard to how the Journal’s layoffs will affect reporting in Ithaca, Hamula said he is not sure how much less could be covered. He said he has already seen the Ithaca Journal pull back in its production, such as not publishing classifieds every day.

“Monday and Tuesday, I say the paper looks like a cigar. It’s just rolled up real tight and there’s not much to it,” he said.

Reynolds said with fewer reporters, the focus is more on trying to keep up with breaking, daily news. He said it takes away from things such as long term stories and getting to know the community.

“There’s strength in numbers for a variety of reasons, and one of those biggest reasons is the time to invest,” Reynolds said.