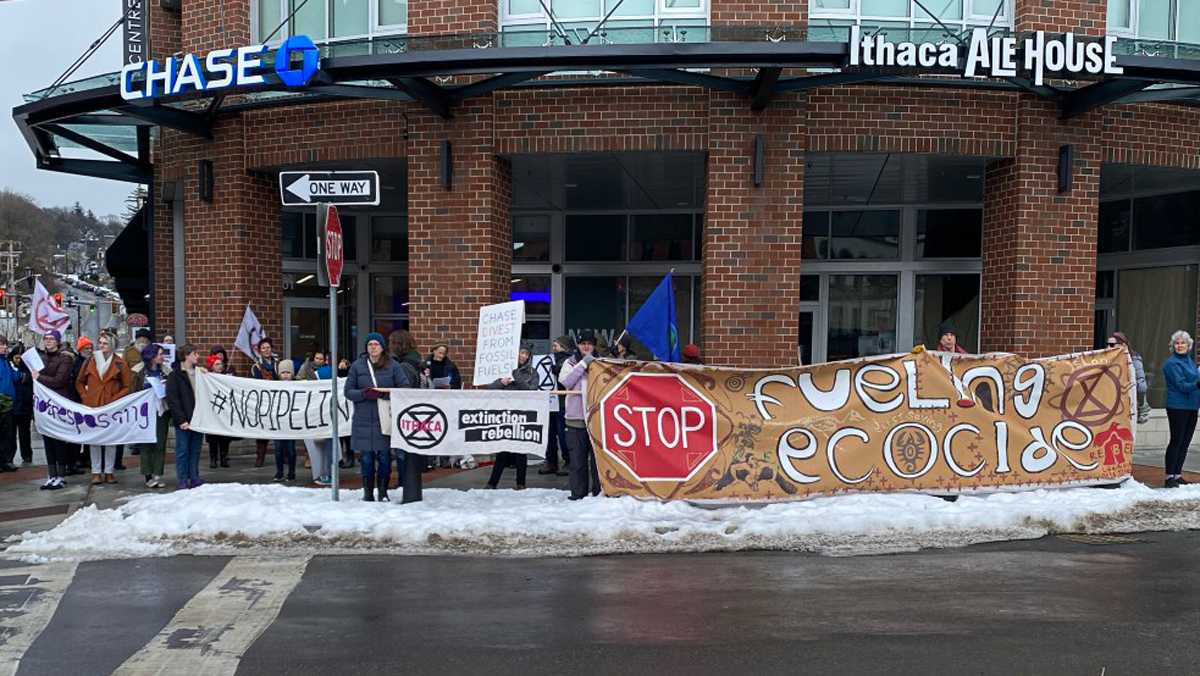 Courtesy of Anna Lamb
The protest, which lasted for five hours, was led by Ithaca’s chapter of Extinction Rebellion U.S., an organization that uses nonviolent civil disobedience to demand change. The group was protesting because of its concern that Chase Bank is financially supporting businesses linked to climate change and human rights abuses.
By Ashley Stalnecker — Staff Writer
Published: February 19, 2020

The protest, which lasted for five hours, was led by Ithaca’s chapter of Extinction Rebellion U.S., an organization that uses nonviolent civil disobedience to demand change. The group was protesting because of its concern that Chase Bank is financially supporting businesses linked to climate change and human rights abuses. A similar protest occurred the day before to stand in solidarity with the indigenous Wet’suwet’en people who would be affected by the Coastal GasLink pipeline in British Columbia, Canada.

The pipeline is being constructed by TC Energy, which is the same company that proposed the Keystone XL Pipeline. Two Ithaca College faculty members belong to the XRI and participated in the protest. The protest coincided with the United Nations Global Divestment Day.

Monticello said IPD officers gave several warnings to the protestors and advised that they would be arrested if they did not leave. The adults arrested were charged with criminal trespass in the third degree, and the minors were released to their respective guardians, Monticello said. Of those arrested, eight were adults and four were minors, Monticello said.

Extinction Rebellion Ithaca (XRI) hand-delivered a signed list “with sincere love and rage” of demands to Chase Bank, but the bank declined to confirm if it had sent it to its corporate headquarters, said John Burger, lecturer in the Department of Health Promotion and Physical Education. The list demands formally requested that the bank address its ties with businesses that support pipeline construction and the displacement of indigenous peoples.

Burger said it is important to recognize the communities being most affected by ecocide, which is the destruction of large areas of the natural environment as a consequence of human activity, according to Merriam-Webster. The most affected communities are often indigenous communities.

Burger is a member of XRI and signed the demands given to Chase Bank. He said he was one of the eight adults arrested.

“If you think of all the good things that happened in our country, … [it is] because people decided these are unalienable rights and didn’t wait for the law to change,” he said.

He said this was the fourth time representatives from XRI have gone to the downtown bank.

Justin Page, associate for JPMorgan Chase & Co., said in a statement that the company has a significant amount of work underway to build upon its efforts on climate-related risk.

“Across our company, we promote inclusive economic growth and opportunity in communities where we operate, and, by 2023, we will invest $1.75 billion toward these efforts,” the statement said. “We also work to advance environmental sustainability within our business activities and facilities. We recognize the complexity of climate change issues and actively engage with a diverse set of stakeholders to understand their views.”

Page said the company joined the Climate Leadership Council last week, a group that is focused on reaching a consensus climate solution.

Burger said the response in the press release from the bank was insulting.

“We spent hours and hours researching, and all they could give us back is a piece of crap,” he said. “It had no substance.”

To date, there has been no reply to a May 21, 2019, open letter to Chase Bank CEO Jamie Dimon that was signed by 300 organizations worldwide with over 30 million supporters, calling on Chase Bank to “defund climate change.”

Patricia Rodriguez, associate professor and chair of the Department of Politics, said she spoke at the protest about the financing of extractivism, which is the process of extracting natural resources from the Earth for sale.

“It was interesting to be there and … to show solidarity and support,” Rodriguez said.

Protesters rally for union at Greenstar