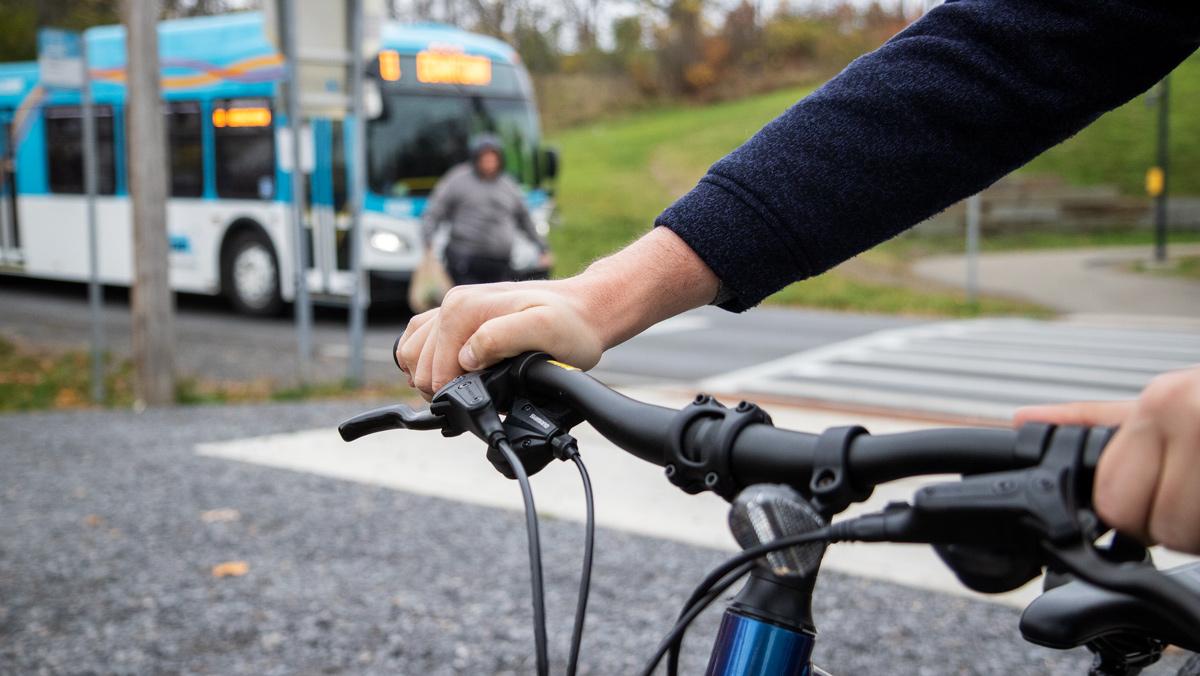 Kristen Harrison/The Ithacan
On Sept. 24, CityLab ranked Ithaca the No. 1 car-free city out of cities with populations of 250,000 or less.
By Ryan Bieber — Staff Writer
Published: October 30, 2019

Ithaca has been named one of the best U.S. metros to live car-free, according to a recent article by CityLab. While some Ithaca College students agree downtown is accessible, they think having a car is convenient.

On Sept. 24, CityLab ranked Ithaca the No. 1 car-free city out of cities with populations of 250,000 or less. Ithaca was also named the top car-free city on the overall index, beating major cities like New York and San Francisco.

The statistics, which were part of a 2017 Census Bureau survey, represent the City of Ithaca but not necessarily the entire town. The Town of Ithaca is the area surrounding the city of Ithaca.

Rebecca Evans, campus sustainability coordinator in the Office of Energy Management and Sustainability, said while those who live in downtown Ithaca have easy walking access to The Commons and surrounding shops and restaurants, those outside the central hub have a harder time getting around the town.

“It makes it easy if you’re living in an urban area and you work within an urban area, but, for the most part, most people don’t. … They either commute to the city or outside from work,” she said.

A 2018 survey by Bike Walk Tompkins and the Ithaca-Tompkins County Transportation Council showed that over 30% of residents who lived five miles or closer to downtown walked or cycled to get to work while another 13% took the Tompkins Consolidated Area Transit (TCAT).

Although these numbers are far greater than the national average, this survey, like the CityLab index, left out residents who lived outside the city.

Freshman Ryan Medeiros has a car on campus and said while the downtown is accessible, he enjoys the convenience his car offers him.

“If you live downtown, it’s kind of like any other city in that you can get to places you need to get to go on foot,” he said. “I would say it is a fair statement but kind of not being located in the city, … it’s kind of convenient to just have a car to just ride down there and not have to walk back up the hill.”

Junior Matthew Kelley owns a car and lives off campus. He said that having a car gives him more independence.

“It’s been a lot easier just because I can go places whenever I want to,” he said. “It’s definitely just more convenient.”

For students without cars, Lime bikes, which are dockless bikes that are available to rent, and TCAT are other options. While the TCAT makes trips from the college to The Commons every half hour Monday through Friday and stops every hour on weekends, getting from the college to further locations like the Ithaca Mall and Cornell University require multiple stops and transferring buses.

In the past, TCAT has struggled with maintenance and staffing, which has resulted in delays, though the issues have since been mostly resolved, as previously reported by The Ithacan.

Evans said it is harder to provide frequent service to places farther away from the urban areas.

“TCAT, if you are only commuting within the city, is pretty reliable and pretty convenient.

Obviously once you get outside the city then that gets a little harrier,” Evans said.

Lime bikes are another affordable and eco-friendly option, but Evans said a lack of sidewalks in areas of the city can create problems.

“For individuals that are lower income, they have really good deals, so they can still afford to use them,” she said. “The one thing on the flip side is that the infrastructure in the city for biking is kind of lacking.”