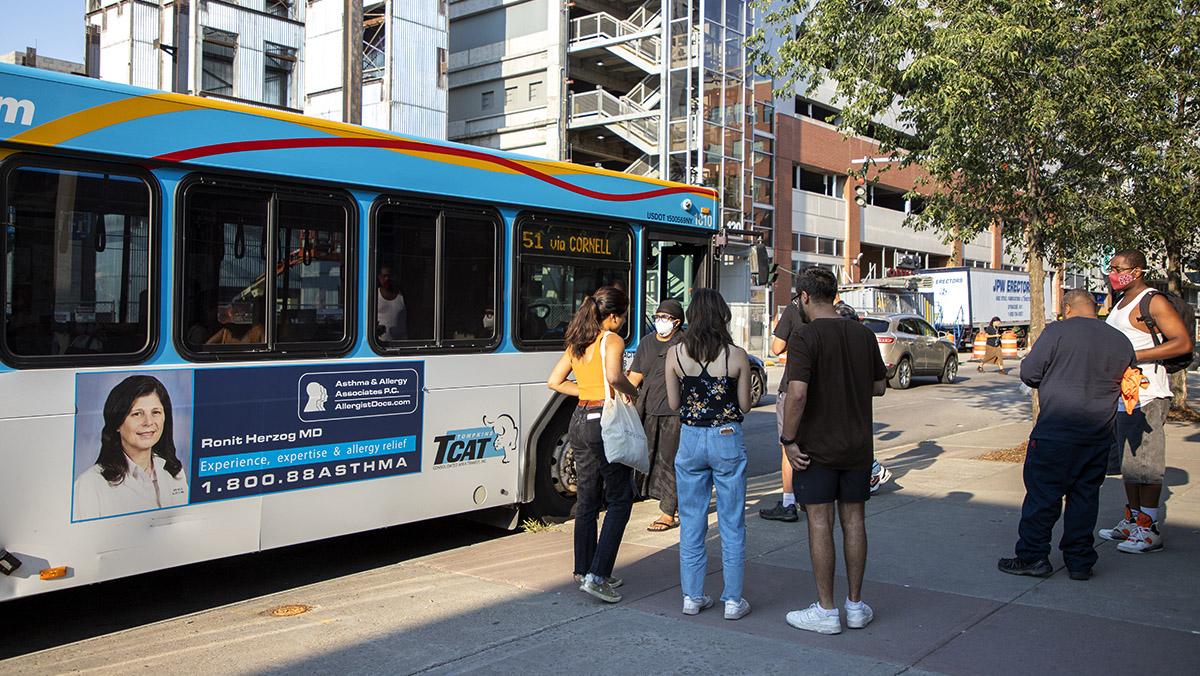 Xinyi Qin/The Ithacan
A petition was launched March 3 to make Tompkins Consolidated Area Transit (TCAT) free, which would increase accessibility and efficiency but reduce TCAT’s revenue. The petition is part of a larger campaign by the Ithaca branch of Democratic Socialists of America (DSA) called FreeCAT that advocates for fare-free and expanded TCAT services.
By Noa Ran-Ressler — Staff Writer
Published: September 14, 2022

Members of the Ithaca community have shown they are ready for free public transit. A petition was launched March 3 to make Tompkins Consolidated Area Transit (TCAT) free, which would increase accessibility and efficiency but reduce TCAT’s revenue.

The petition is part of a larger campaign by the Ithaca branch of Democratic Socialists of America (DSA) called FreeCAT that advocates for fare-free and expanded TCAT services, according to Sabrina Leddy, the chair of the FreeCAT campaign. Leddy said the petition is a tool for the campaign but is not the sole focus.

George DeFendini, interim chair of Ithaca DSA and Fourth Ward alderperson on Ithaca’s Common Council, said the goal of the campaign is to bring attention to a public need and public demand. Some of the other aspects of the campaign that are carried out by Ithaca’s DSA members include canvassing and speaking to TCAT riders, meeting with local government members and more, according to DeFendini.

“The issue we’re trying to address with free mass transit … drives through the issues of systemic marginalization and racism, systemic classism, the climate catastrophe,” DeFendini said.

The campaign calls for Cornell University to foot the bill for fare-free public transportation. According to DeFendini, Cornell’s tax exemption is an opportunity for them to contribute to the community financially. In 2021, Cornell contributed over $1.4 million for fire and other municipal costs, according to the City of Ithaca’s budget narrative.

According to the Association of American Universities, most colleges and universities, including Cornell University, are tax-exempt as non-profit educational institutions, falling under the IRS Section 501(c)(3) exemption. Ithaca College is also part of this tax exemption.

According to the Free TCAT Campaign Vision Statement, Cornell’s wealth and expansive network mean the university is responsible for covering the costs of going fare-free.

“If you’re not going to pay taxes, you need to pay your fair share, and what a wonderful opportunity expanding and making free transit [is],” DeFendini said.

According to Leddy, it would be up to TCAT to decide what costs — like maintenance, wages, insurance and more — would need to be paid by Cornell.

“We don’t have an exact budgetary outline of what we want Cornell to pay for,” Leddy said. “It’s up to TCAT as to how they allocate those funds, based on their own assessment of efficiency and need in different areas.”

Each TCAT single-ride pass costs $1.50, according to the TCAT website. Scot Vanderpool, TCAT’s general manager, said each ride costs TCAT$4, while TCAT makes an average of $1.18 per ride, including the discounted tickets.

Cornell passes — including students, faculty and staff — make up 75% of all TCAT rides, according to Erik Amos, TCAT’s service development manager.  Students at Cornell University have unlimited bus pass access with their college ID cards. Students new to Cornell receive unlimited rides on both weekdays and weekends. Other students who have attended Cornell for more than one academic year can only use their unlimited rides after 6 p.m. on weekdays, and anytime on the weekends.

TCAT, like many other public transportation systems in the nation, is struggling with a driver shortage, according to Vanderpool. According to the American Public Transportation Association, 71% of transit agencies surveyed have had service affected by driver shortages and 92% have struggled to hire new drivers.

Vanderpool said if the TCAT becomes fare-free, ridership will increase, which will create a need for more drivers. He said he hired a recruiter to address the issue of a driver shortage. Additionally, TCAT has a data analyst that is looking into the cost of fare-free transit.

On Sept. 6, the Ithaca College Office of Student Affairs and Campus Life announced that TCAT’s service would be limited to and from Ithaca College. TCAT said Route 11 — a route that connects the college to The Commons — would be reduced due to budget and staff limitations.

Ithaca College passes make up 3% of all TCAT rides, according to Amos. A majority of passes are students. The remaining 22% of TCAT ridership is made up of employers purchasing passes for employees, Tompkins Cortland Community College and general Tompkins County residents.

Senior Tatum Siegel said they take the TCAT four times per week now that they work off campus. With the reduction in buses to and from the college, they said they have to walk from The Commons to campus at night.

“It’s particularly inconvenient for me because the buses stop at 9 p.m. on weekdays … and I work in a movie theater, so I work [late],” Siegel said.

Senior Tony Greif said that while they rely on the TCAT to get them to The Commons each week, the trips are costly in the long run.

“Because of how frequently I use the bus, I tend to spend more than $50 per month,” Greif said. “Cornell students … have unlimited rides for free, … [Ithaca College students] have to pay, which seems unfair.”

Vanderpool said wages cost TCAT $11.2 million per year, and fuel, parts, maintenance and insurance cost a combined $4 million per year. He said there have been cost increases in each of those areas, and those costs will continue to rise with inflation.

According to The Ithaca Voice, a 38.4% increase in TCAT’s operational costs could lead to a $3.7 million deficit for TCAT in 2024. As the contract stands, each of TCAT’s underwriters — the City of Ithaca, Tompkins County and Cornell University — will have to split the cost of that deficit equally, but the contract is currently being negotiated.

Fare-free public transportation has been implemented in around 100 cities across the globe, according to The New York Times. In Olympia, Washington, Intercity Transit went completely fare-free Jan. 1, 2020.

According to Ann Freeman-Manzanares, the general manager of Intercity Transit, there have been social, financial and environmental benefits to going fare-free.

“It removes all barriers for all people. … It makes it more affordable, it encourages people to ride the bus, it reduces traffic congestion. … Collecting a fare really slows down the boarding process,” Freeman-Manzanares said.

Ithaca community members were concerned with the cost of going fare-free, and unlike FreeCAT, Olympia’s fare-free program relies on taxes.

“This is a tax-payer supported benefit to the community, just like libraries, public schools, public parks,” Freeman-Manzanares said. “You don’t pay to use our community parks, … you already do through your taxes, and the same is true for public transportation.”

Freeman-Manzanares said sales tax funds public transportation in Washington State, and the tax did increase to expand service prior to implementation of the fare-free program, but not as a result of it. A 2019 study into the city’s revenue spurred the zero-fare conversation. The revenue from fare collection — after subtracting the cost of collecting, advertising and processing fares — was 2% of the city’s revenue, she said.

“Our authorities said we can afford to provide this service because it’s so inexpensive, and … the benefits to your community are compounded,” Freeman-Manzanares said.

Vanderpool said he agrees with FreeCAT’s goal of making public transportation more accessible and efficient. He said there are internal considerations, like budget and driver recruitment, that need to be prioritized before FreeCAT can be realized.

“If we feel at some point in time we can go fare-free, we’ll do that,” Vanderpool said. “We’re just not quite ready.”

Leddy said Ithaca DSA will be focusing on communicating with the public in the next few months, as members continue canvassing and speaking to the local government and TCAT.

“Signing the petition is always the first step to getting involved. … We’re trying to connect more,” Leddy said. “We are trying to be as present as possible.”