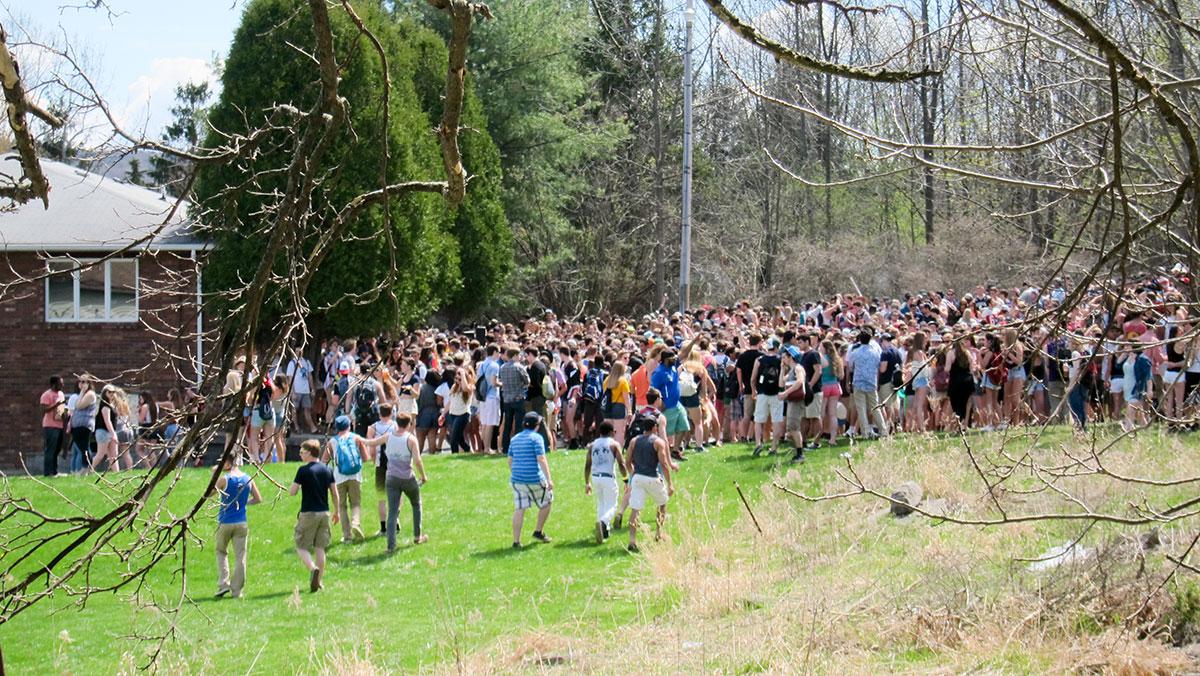 faith Meckley/The Ithacan
Students celebrate Kendall Day in a backyard on Kendall Avenue on May 2, 2015. This year for Kendall Day celebrations, the Office of Public Safety and Emergency Management, the Ithaca Police Department and the Tompkins County Sheriff’s Office are working together to make sure students are safe throughout the day, in response to incidents last year.
By Ana Borruto — Staff Writer
Published: May 3, 2016

In the backyard of 164 Kendall Ave., crowds of Ithaca College students gathered from neighboring houses in May 2008. There was an endless number of kegs and people — a perfect way to celebrate the semester’s close. Kendall Day was born.

Eight years after the first Kendall Day celebration, students are anticipating the next installment in what has become an important tradition in the college’s culture. Following a police crackdown on last year’s party, the Office of Public Safety and Emergency Management, the Ithaca Police Department and the Tompkins County Sheriff’s Office are working together to make sure students are safe throughout the day.

Lt. Dan Donahue of the sheriff’s office said it responds to the South Hill area, which includes Kendall Avenue, Pennsylvania Avenue and Coddington Road, and maintains order and safety on Kendall Avenue. The sheriff’s office has the power to randomly check student IDs, arrest people for trespassing and keep roads clear for emergency vehicles to pass through.

Adam Young ’09 was one of the contributors to the birth of Kendall Day. He said he and his friends lived on the street during the 2007–08 school year as juniors and hosted parties often.

Young said that when applying to Ithaca, he knew the college was known for two things: the Cortaca Jug and Prospect Day. Prospect Day, at that time, was the block party most people attended at the end of the school year. However, the confined space made partying difficult.

Sarah Grunberg, lecturer in the Department of Sociology, said she attended the first Kendall Day when she was a senior. Grunberg said it was a big party that year because there was a mix of people who lived on Kendall Avenue and those who did not.

“I don’t know if they designated it ‘Kendall Day’ or if it became that over time,” Grunberg said. “I think all of the guys involved have this thing about them where they just want to take things to the extreme, and I think that’s what kind of created this culture around Kendall Day.” 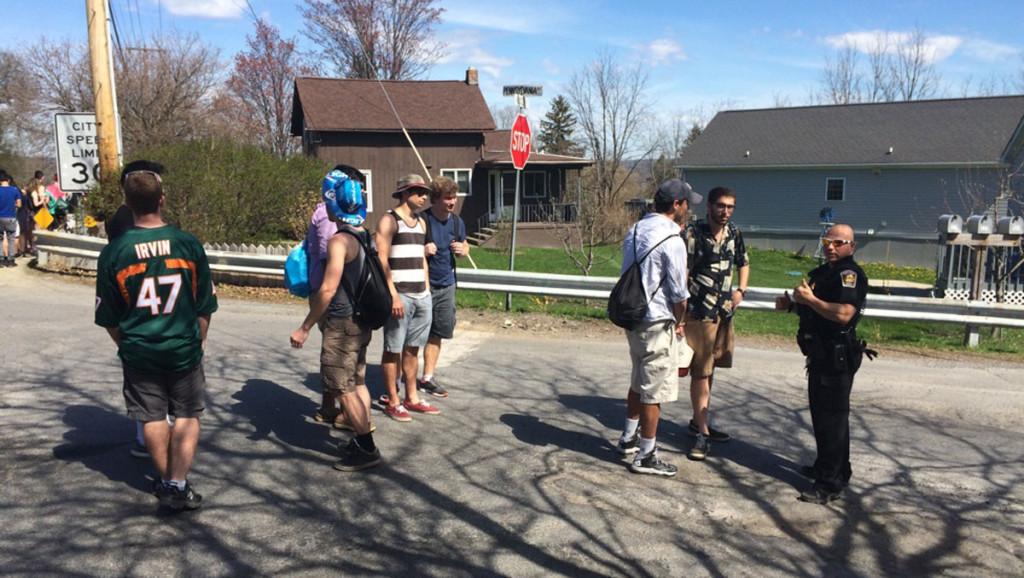 Lt. William Kerry of Public Safety said last year’s Kendall Day had a higher attendance than that of past years. Donahue said law enforcement had to break up the party when the population reached 3,000 people and it became unorderly. There were six arrests made that day for disorderly conduct and consumption of alcohol under the age of 21, Donahue said.

Based on previous reporting from The Ithacan, students were turned away from Kendall Avenue by law enforcement. However, Donahue said that last year, students were not turned away but directed to a different location, which was reportedly Z-Lot.

“I can’t turn anybody away from a public place,” Donahue said. “When the main party got out of hand, we told people to leave, but we didn’t tell anybody they couldn’t be there.”

David Maley, senior associate director of media relations at the college, said the college learned about students being told by law enforcement that the party will continue on campus in Z-Lot. Maley said they responded through social media to let students know this was incorrect.

“The key to everybody being able to enjoy themselves is to make sure that all of the … state laws and local laws are adhered to,” Kerry said. “The law enforcement end of things is … to make sure that people are being lawful and orderly.”

David Dray, assistant director and deputy chief of Public Safety, said Public Safety has very little presence on Kendall Avenue during that day because it is off campus and in the jurisdiction of the sheriff’s office. Their main concern is how students are handling themselves on campus.

Throughout the day, students celebrate the end of the semester with their friends in different ways.

Junior Emma Moran said last year was the best Kendall Day for her because her three best friends from home came for her 20th birthday.

“Last year was just so carefree,” Moran said. “Freshman year, I was more nervous to go to Kendall Day. Then, sophomore year, I was like, ‘I know what Kendall Day is — I’m going to have the time of my life.’”

Senior Isaac VanCuren moved to Kendall Avenue this semester, and this will be his first time being a resident during Kendall Day. VanCuren said he and his roommates have already created a plan in preparation for the day.

“So what we’re doing is driving our cars up to campus, leaving them on campus and then walking back down to our house so they’re not going to be on the street,” he said. “We plan on boarding up our windows, locking doors — no one is coming in the house.”

Kendall Day this year will fall on May 7, during the weekend before finals.

Rory Rothman, associate provost for student life and educational affairs, and Dominick Recckio, student government association president, sent out an Intercom message encouraging students to act responsibly these last fews days of school. The Tompkins County Sheriff’s Office and Ithaca Police Department will be enforcing a “zero tolerance” policy and arresting those who violate the law, according to the announcement.

Donahue said the sheriff’s office this year will be teaming with Public Safety and student groups to go around the neighborhood and hand out fliers and door hangers to inform people about Kendall Day and how people are expected to behave.

In response to last year’s disorder, Dray said Public Safety will help students get back to campus safely.

“We will have officers at the Coddington entrance to help facilitate, to get them back and forth across the roadway in a safe manner,” Dray said.

Young said he thinks the Kendall Day tradition will likely continue, and by looking at each growing year, he said, it seems it is not going away anytime soon.

“The fact that it’s lasted this long, I think, has blown all of us away, beyond our wildest expectations,” Young said. “I think if someone were to … move into that area and decide that the tradition is not going to keep going, there might be some riots on campus.”