Key college administrators receive an increase in base compensation 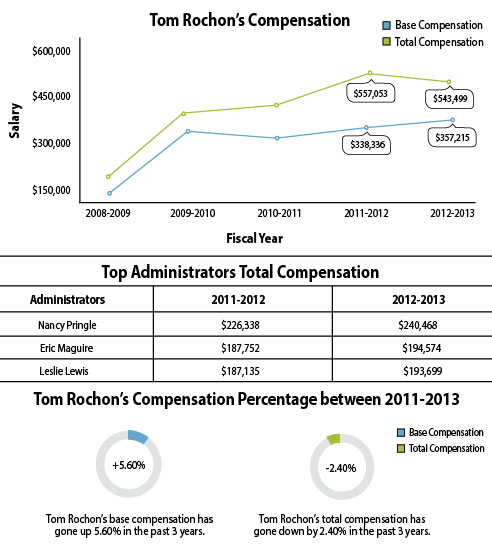 The recent release of the IRS Form 990 for Ithaca College indicates increases in base compensation values for the college’s key administrators, including President Tom Rochon, for the fiscal year ending in May 2013.

Rochon was not available for comment. Gerald Hector, vice president of finance and administration, declined to comment.

“The pool is something that we build into when we’re building the budget, and everyone that worked at the institution and performed at a certain level participated in that pool,” Hector said. “There is a formal process to human resources that everyone has to go through, and everyone has to fill out an annual evaluation and they have to have discussions.”

He said there is no set salary adjustment for each administrator.

“It’s merit-based, so your performance counts for how your increments will be,” Hector said. “But the increment is at a certain cap for the institution across the board, so that’s how everybody else is adjusted.”

She said the college makes sure to provide universal benefits, such as health care and dental, to everyone at the institution.

Overall, Hector said, the college has seen a 2.99 percent comprehensive increase in its tuition and fees since the last fiscal year.

He said the college operates on a discount rate system, where the college looks at the increase in tuition and fees, which does not include the price of room and board, in terms of the kinds of institutional aids that will make college affordable for students.

“As you might very well know, although the sticker price is $53,807, students are not paying $53,807,” Hector said. “They are paying much less than that, depending on a number of variables that goes into financial aid awarding and packaging.”

Pringle said because the college is a tuition-driven institution, the college’s annual tuition rate depends on the college’s overall budget. She said Rochon plans to keep rates as low as possible while contributing to the salaries of the administration.

“The president has committed to keeping the tuition increases as low as we possibly can while at the same time making sure we compensate those employees who are here,” she said.