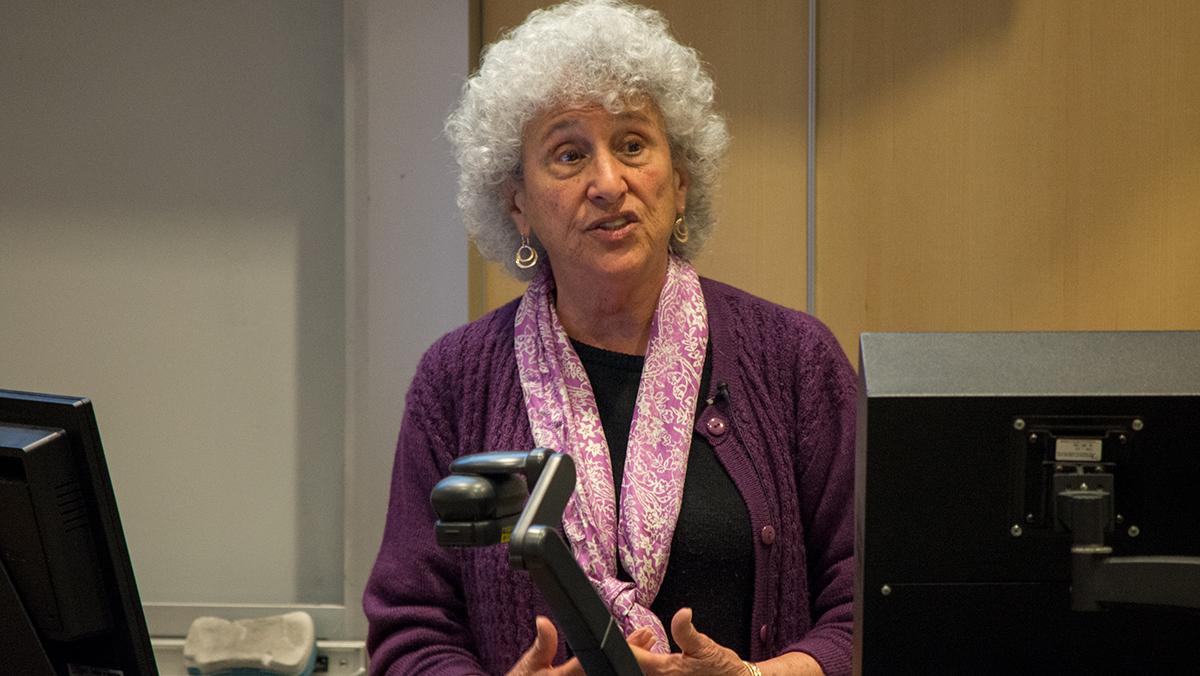 Teddy Zerivitz/The Ithacan
In front of a crowded Textor 102 on April 17, Nestle said the price of food has increased the most for healthy foods and that this has had a negative impact on people with low incomes the most.
By Sam Haut — Staff Writer
Published: April 19, 2017

To kick off the annual sustainability week at Ithaca College, keynote speaker Marion Nestle, professor of nutrition, food studies and public health at New York University, spoke about why unhealthy foods are more accessible and what she has done to address the effects of soda.

Nestle has written nine books on the topic of sustainability in food and is also a visiting professor of nutritional sciences at Cornell University. Nestle has received numerous awards from food health organizations for her work in nutrition, and six of her books have received awards as well.

In front of a crowded Textor 102 on April 17, Nestle said the price of food has increased the most for healthy foods and that this has had a negative impact on people with low incomes the most.

“So if you’re someone who’s poor, and you want calories, and you want to eat, you’re going to buy the cheapest foods you possibly can, and that’s going to be the junk foods that are heavily advertised, coming in large portions and are probably not so good for you,” she said.

Nestle said there is a gap that exists between rich and poor people when it comes to what they eat. She mentioned a New York Times article written over 20 years ago about how rich people are able to eat healthy foods, while poorer people are unable to afford those healthy options and have to eat unhealthy food instead.

“It’s not only that we have a socioeconomic gap between people who are rich and people who are poor, but that has been reflected in the kinds of diets that they eat, and this has been known for quite a while,” Nestle said.

Her latest book, “Soda Politics: Taking on Big Soda and Winning,” talks about the various ways in which the soda industry has used its influence to increase profits by downplaying health concerns. Nestle mentioned a New York Times article that details how Coca–Cola has funded research that produced results saying the soda was not a significant cause of obesity and that a lack of exercise was to blame.

The Coca–Cola Company has since started a website where they listed every organization and individual they fund to become more transparent.

Nestle also talked about how meat production contributes heavily to greenhouse gas emissions in the United States and how our food system as a whole affects the environment. Agriculture contributes to 15 percent of greenhouse emissions, half of which comes from livestock, a study from Bard College found.

“The way we produce our food is an extreme problem because it contributes to climate change in a very serious way, and so does how we eat,” Nestle said.

She also relayed a story demonstrative of Coca–Cola’s efforts to monitor her research: While she was giving a talk in Sydney, Australia, she noticed someone in the crowd taking notes, a PR representative who then sent an email to a Coca–Cola VP about the need to monitor social media around Nestle’s visit. The Sydney Morning Herald reported this based on internal emails.

At the time of publication, Coca–Cola has not responded to request for comment.

Sophomore Nga Ruckdeschel said that while she knew some of the information Nestle talked about, she was also surprised to hear about all the things Coca–Cola did to protect its business.

“One thing I learned is about the soda company — of course, I know they want to make money, so they don’t want to do anything that will jeopardize that, but I didn’t know they would go that far to be that sketchy, to follow an educator and say, ‘Watch her,’” Ruckdeschel said. “It shows the sketchy side of big corporations.”

Ruckdeschel said she thought most of the students attended the event for extra credit and that most people at the college do not care about sustainability. Ruckdeschel is an RA and said she has to remind people on her floor to turn lights off and throw trash in proper bins.

“We’re college students, so I feel like that’s an excuse in of itself: ‘Oh, I have too much work to do, I don’t have time to do this,’” she said.