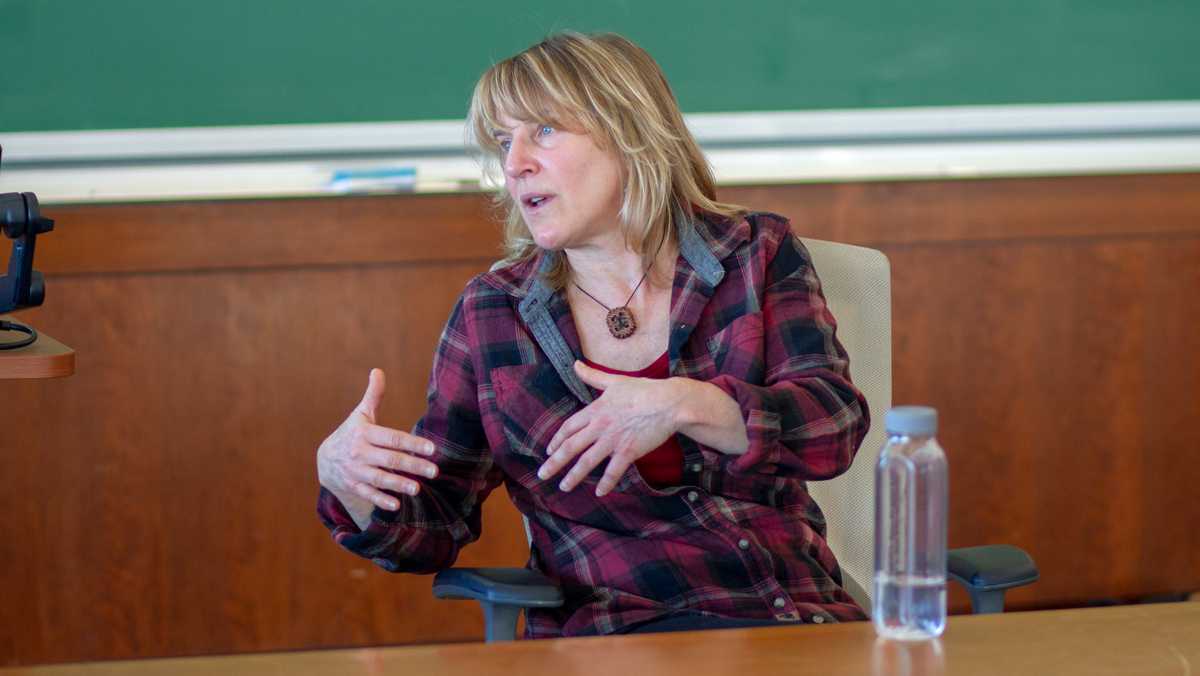 Ithaca College hosted environmentalist and lawyer Maya van Rossum, Delaware Riverkeeper and leader of the Green Amendment movement, for a presentation on environmental degradation, protections and policies March 25 in Textor 101.

Throughout the presentation, van Rossum spoke about the current state of environmental protection in the U.S. She discussed environmental rights on a state–by–state level, many of the problems people are currently facing due to environmental damages and how they are being impacted by them. She explained that people need a new platform to protect their environments and communities through new agendas like the Green Amendment movement. According to Rossum’s website, the Green Amendment is a grassroots movement that aims to empower people by demonstrating ways they can take action about climate change, and it emphasizes the importance of implementing legally binding environmental protections. Van Rossum presented to approximately 50 members of the college community.

She said there are sites across the nation that are saturated with one contaminant or another, despite the environmental laws that are currently in place.

“When I go into communities that are facing one threat or another, people always have the same question, …  ‘How can it be that we are facing this major threat to our health, to our community, to our environment, to our very lives?’” she said.

Van Rossum said some environmental protections have had positive effects and have reduced pollution, prevented illnesses, provided jobs and supported local economies. However, she said they have only worked to a certain degree and the current system of laws is failing. She said the effects of perfluorinated chemicals, a group of toxic chemicals that she focused on as a pollutant, put anyone who has come in contact with these toxins at risk for side effects like cancer. She said this is especially true for people who have unknowingly been drinking contaminated water for decades.

“We have communities across the state of New York and across the nation who continue to suffer as a result of pollution and degradation like the community of Paulsboro, that finds their drinking water contaminated with chemicals,” she said.

She talked about a family from Pennsylvania, the Stauffers, who live near the Bishop Tube site. She said that Trichloroethylene, a toxic chemical compound, has spread from the site into the surrounding area, affecting the family.

She also talked about the lack of rights that guarantee people are able to live in a healthy environment and suggested to the audience that people should have the right to water that is toxin-free. She explained that according to the Declaration of Independence, the right to a clean environment in the United States is not promised.

Senior Mike Moritz attended the event and said he thought the presentation was powerful because of van Rossum’s passion and knowledge of the Green Amendment.

“I was very moved,” Moritz said, “Her passion and her projected voice have … filled us up with more inspiration.”

He said he is excited to potentially open up a Green Amendment movement in the City of Ithaca.

Senior Chris Barnes said it was refreshing to hear from a lawyer about policies concerning climate and environment in a more informal setting.

“It really splayed open the emotional accessibility that all people, in different contexts throughout the day, have to impact climate change,” he said.

Junior Emmeline Klatt also attended the event and said it was inspirational to see a large number of people in the community attend the event. She said something she would take away from the presentation is to stay optimistic about the environmental rights movement.

“It’s slow and it’s long and the change takes a while. … Keep doing what you can, that’s what I would get from it,” she said.