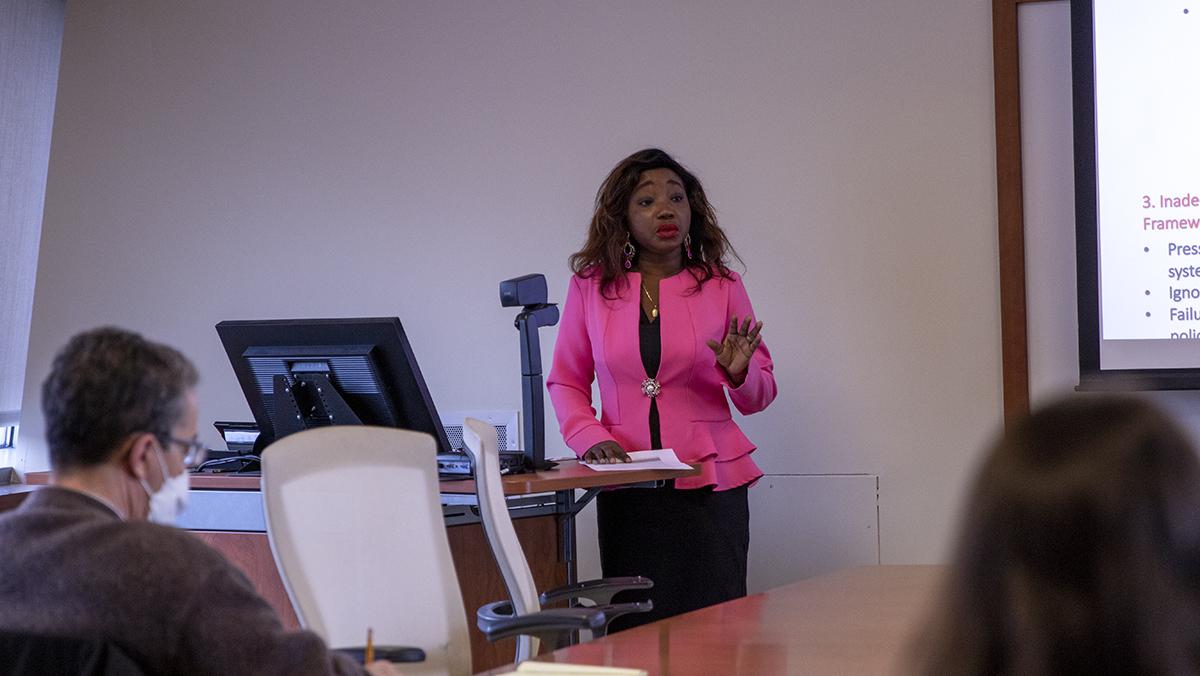 The Department of Politics hosted a presentation April 4 to bring awareness to abuse found in faith-based higher education in Africa.

Lady Ajayi, visiting assistant professor in the Department of Politics and a 2021–22 American Association of University Women International Fellow, created the presentation from research she conducted centered around faith-based abuse in Nigeria. About 15 people attended the event, including professors and students.

Ajayi said her research process has consisted of observing and monitoring the progress of institutions she and her colleagues work in. Ajayi said that interviewing survivors is the next phase of her research and that she recognizes that may be difficult.

1-in-3 women globally will experience sexual or physical violence from an intimate partner or sexual violence from a non-partner, according to a 2021 World Health Organization study. The study also found that by the time women are 24, 1-in-4 who have already been in a relationship will have experienced violence from a partner.

“Daily, there have been several stories of abuse and death in the media,” Ajayi said. “Numerous studies have examined the underlying causes of high rates of violence against women and girls, and one of the factors that have stood out for me in most of the findings is the role of religion and faith in the escalating or reducing this global shadow pandemic.”

Ajayi said that for decades cases of sexual violence have been linked to the Catholic Church, not only in Nigeria, but all over the world. Multiple Christian colleges in the United States have faced sex–abuse reports like Bob Jones University, Liberty University, Cedarville University, and Patrick Henry College. Ithaca College Rev. Carsten Martensen stepped down as Catholic chaplain and director of the campus in 2019 after the campus community was notified of a sexual abuse allegation against him.

“Within the Nigerian faith-based institutions there have been cases of religious leaders abusing authority,” Ajayi said. “Including the widely published ‘Sex for Grades’ by BBC Africa, where one of the perpetrators of abuse was the clergy of a faith community. … I’m sure you agree with me that the United States is not exempted from this reality.”

“I discovered that these institutions provide a controlling cultural and patriarchal framework that influences students, faculty and staff,” Ajayi said. “Beliefs and attitudes about gender roles, relations and gender balance. It is appalling to see how such attitudes and beliefs conflict with interpretations of the larger society regarding issues of rights and security.”

Ajayi said social media has been a great tool to unite survivors all across the world, and cited the #MeToo Movement as an example of this, which was a social movement that worked to expose crimes of sexual abuse and harassment. It was founded in 2016 by Tarana Burke, survivor and activist, but went viral in 2017.

“[The #MeToo Movement] showed victims, survivors of sexual abuse, who had lost hope in institutions, how the social media platform could serve as a safe space,” Ajayi said. “Void of condemnation and judgment. It is a safe space where survivors of abuse can be heard as they share their experiences, recount incidents, build community and fight for justice. It is quite riveting to see how millions of women and girls across the world use this platform so effectively in calling out their abusers and getting the support of billions of people across the world.”

Peyi Soyinka-Airewele, professor in the Department of Politics, said that while the utilization of social media is a tool for survivors to unite, there have been cases where social media has been used against survivors.

“On one hand, it’s a tool that can be used to support, like when we think of ‘MeToo,’” Soyinka-Airewele said. “But at the same time, we see this pushback, very often there’s this mobilization by many of the organizations and institutions. And so when somebody speaks up, there’s an intensity of a very vicious cancel culture that comes against the individual.”

Cancel culture is a contemporary phrase that refers to when someone is ostracized and receives mass disapproval, usually over social media.

Ajayi said that oftentimes perpetrators who are connected to the church have a wider circle of support, which makes it more likely for people to not believe the victims. She said influential societal models play a role in how social media can ultimately benefit perpetrators.

“It’s usually very difficult when a victim comes out to speak with that pastor; having that magnitude [of support] and having branches in different parts of the country … mobilizing together to support their pastor against this victim,” Ajayi said.

Ajayi brought up that male dominance is an intersection found within faith, power and abuse, and that generally women are more often victims than men.

“There are deeply-rooted theological constructs of religious authorities and supreme beings as males, hence the women, or females, automatically are placed in subservient roles,” Ajayi said. “As such, patriarchal and religious narratives give power to men and subjugate women through indoctrination.”

Sumru Atuk, assistant professor in the Department of Politics, said it is difficult to discuss faith and gender-based violence, because often people conclude that religion is the motivation behind the violence.

“What I find is, if you use religion and gender-based violence in the same sentence, then … they conclude that it’s just only really religious and [that] institutions and structural issues have nothing to do with that [the violence],” Atuk said.