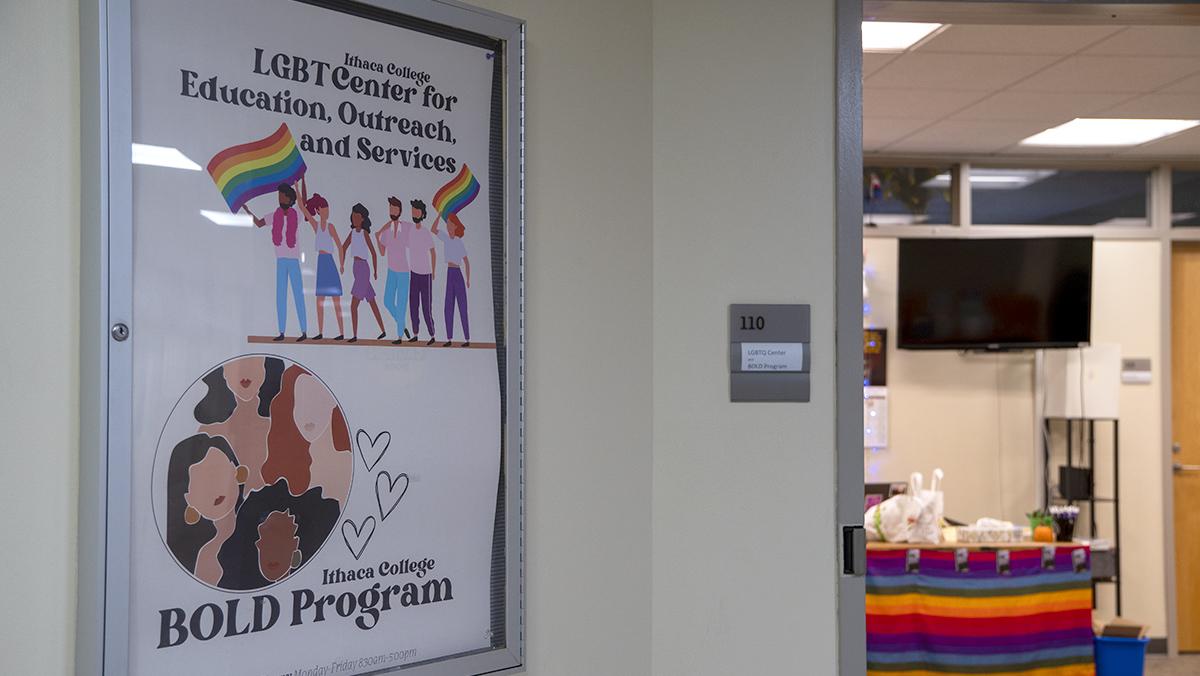 In honor of LGBTQ+ history month, the Ithaca College Center for LGBT Education, Outreach & Services is planning four events for students during October 2022.

The events include a queer storytelling workshop led by multidisciplinary artist Cai Quirk on Oct. 11, a talk from a transgender activist Paisley Currah about his new book Oct. 12, a student-led panel about asexuality on Oct. 24 and queer Halloween trivia Oct. 31. The center has been a resource for students at the college for 21 years and has helped make the college a more inclusive space for LGBTQ+ students.

Grace Dosdall, pride fellow at the LGBT Center, said keeping the five-star rating is not why the center holds events. Instead, the focus is on uplifting student voices.

“When students come to us and [say] ‘we really want to do this,’ the answer is rarely no,” Dosdall said. “That is the best way we can elevate student voices and by listening to students, students know better what the college needs than we do.”

Junior Ash Plummer, who works at the LGBT Center and is the president of Spectrum, the LGBTQIA+ club at the college, said there have been more events this semester compared to other semesters since Dosdall was brought in as a pride fellow.

“Since [Dosdall] has gotten here, there’s been so many more events,” Plummer said. “It has been so great because there’s something almost every week. It also takes some of the pressure off student [organizations] knowing there’s speakers coming and talking about queer issues. As president of a queer [organization], it’s like ‘oh, we can promote these events as a club, but not necessarily have to plan them,’ which is nice.”

Dosdall said that since she has a degree in higher education and knows the theories and teaching aspects of higher education, she is able to focus more on planning events for students.

“I really get to jump in with programming and idea implementation because there was less catch up work that needed to be done,” Dosdall said.

Aside from these events, the LGBT Center is using its Instagram to highlight 31 queer icons for the 31 days of October. These icons are sourced from lgbthistorymonth.com and allow for celebration and education of LGBT trailblazers.

Oct. 11 is National Coming Out Day, and the LGBT Center is holding a workshop led by guest speaker Quirk titled “Your Story Your Way” at 12 p.m. in the Clark Lounge.

Quirk focuses on queer stories throughout history and how they have been erased and reclaimed. Their book “Transcendence” connects stories and photos and focuses on gender, mythology and nature-based spirituality.

Oct. 12 the LGBT Center is sponsoring an event over Zoom with Currah where he will speak about his book “Sex is as Sex does: Governing Transgender Identities.” The Zoom link for the event can be found on the LGBT Center’s Instagram.

Oct. 19 is International Pronouns Day, and the LGBT Center will be tabeling in Campus Center.

Dosdall said the table will focus on providing resources and education about pronouns.

“We have the more common pronouns — she/her, they/them, he/they — and then there are neopronouns as well, so we’ll have some information about those,” Dosdall said. “It’s an informational booth to talk about the day and why we have it.”

First-year student Maisy Kobernik-Pollack said they are particularly excited about the pronoun tabeling and it is a chance for students to educate themselves.

“It seems like a good opportunity to educate students who are going because they genuinely want to learn more about other identities,” Kobernik-Pollack said.

Asexual Awareness Week falls during the last week of October and asexual students are planning an asexual student panel in the at 7 p.m Oct. 24. in the Clark Lounge. Dosdall said the panel is entirely student run and there will be six students on the panel and one student facilitator asking questions to the audience.

“We are going to have a QR code and a form where people in the audience can anonymously ask questions,” Dosdall said. “The student facilitator will then ask the panelists [the questions].”

“So many people go through so many different experiences with it,” Stitely said. “Asexuality is on a spectrum, so it’s interesting to hear everyone else’s personal experience.”

Junior Gwyneth Cole, a student worker at the LGBT Center who also helped plan the panel, said that the panel will help show the different sides of the asexual spectrum.

“All of the panelists identify slightly differently, [so] we are getting sides of each part of the spectrum,” Cole said.

To close out the month, on Oct. 31 the LGBT Center is putting on an all-day trivia event called “Queer Christmas Trivia.” The event centers around how Halloween and queerness are linked and will be held at the center in the Tower’s Concourse.

“[Halloween] is often referred to as the queer high holiday or the queer Christmas, so we wanted to do something fun with that,” Dosdall said.

Kobernik-Pollack said that Halloween events are an effective way of allowing queer people to express themselves while having fun.

“I feel like that’s a good way of allowing queer people to express themselves in a way where they don’t have to pull back at all as they might have to in everyday life where they’re existing in straight spaces,” Kobernik-Pollack said. “You can just let it all out and dress however you want and express your identity and have fun in an over–the–top way.”

Stitely said that events like these educate the community of Ithaca and bring students together.

“Having these events [allows] people to meet each other and talk about issues,” Stitely said. “It opens the conversation up because if we don’t have these events, then how are people going to learn certain things?”

Ryan Johnson can be reached at rjohnson4@ithaca.edu