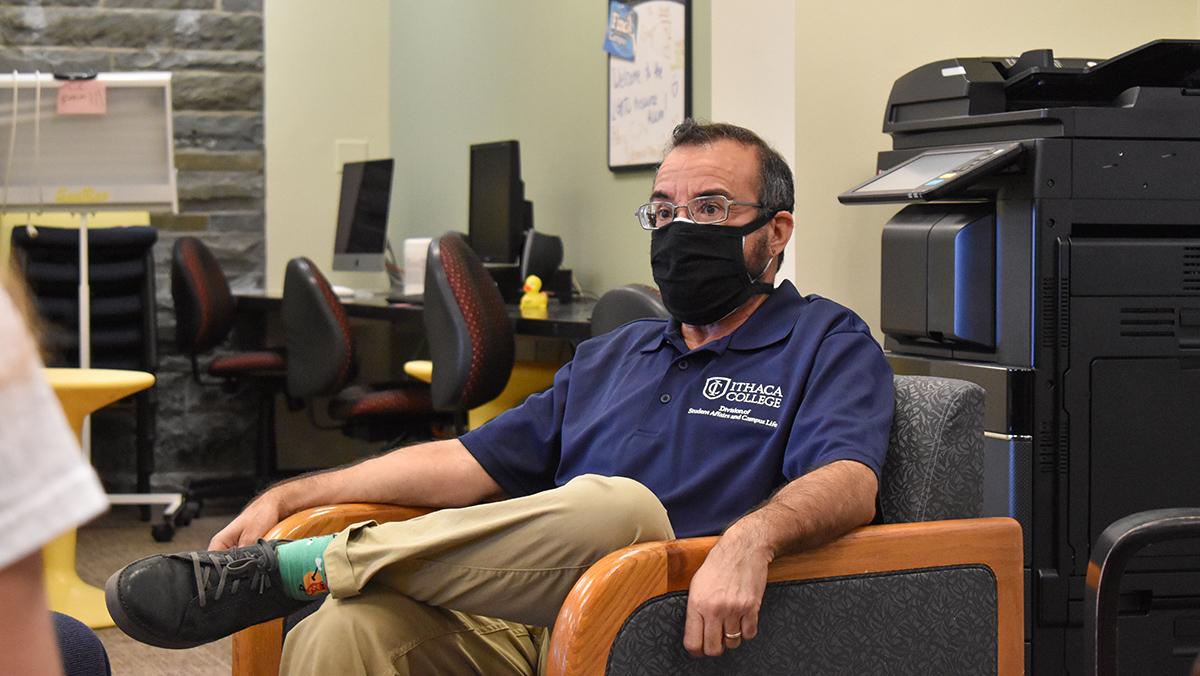 Nolan Saunders/The Ithacan
Luca Mauer, director of LGBT Education, Outreach and Services said that one of the most unique elements of LGBT Center at Ithaca College is the student engagement at the center.
By Chloe Johnston — Contributing Writer
Published: October 6, 2021

Smiles adorn the faces of Ithaca College alumni as they explore the Center for LGBT Education, Outreach and Services’ new space Oct. 2. Freshly–painted green walls, a jar of pronoun pins and magazines of queer figures in pop culture create an inviting air.

People stand with their arms outstretched, laughing about how the room is fit for social distancing — a far cry from what alumni Kyle James ‘16 referred to as “previously cramped quarters.”

The college’s LBGT center, which works to advance the growth and success of LGBTQ+ students, is celebrating its 20th anniversary this year. The groundwork to create the center was set in November 1999, with the gathering of a committee of students, faculty and staff who were interested in creating a resource center that addressed the needs of LGBTQ+ students and allies. The committee created a proposal and sent it to the acting vice president for Student Affairs and Campus Life, and the Ithaca College Board of Trustees approved funding for a center in February 2001. The LGBT Center opened Nov. 12, 2001.

“It was student advocacy and activism and leadership that brought Ithaca College’s LGBT Center into existence,” Luca Maurer, director for the center, said. “And so there’s no way to talk about our center here without talking about the contributions of people who are alumni.”

The college has consistently ranked as the “Best of the Best” on the Campus Pride Index since 2012. Maurer, director of LGBT Education, Outreach and Services, has been with the center since its inception. He said one of the most unique aspects of the LGBT Center at the college is student engagement.

The LGBT Center will host visitation opportunities as a celebration of the organization’s 20th anniversary, like an open house from 4 to 6 p.m. on Oct. 7 and events surrounding National Coming Out Day.

The center recently moved from the Garden level of the Hammond Health Center early in the fall semester to Suite 110 in the Towers Concourse. The new space will be shared with the BOLD scholarship program.

Kiera Duckworth ‘10 said she was excited about the possibilities within the new space.

“To be able to walk into the space and see so many opportunities to grow, to hold programs, to hold moments of connection, I think is really huge,” Duckworth said. “Students are going to pass this door multiple times a day and I think it’s just going to raise the profile which is really exciting.”

The Center has been a driving force behind LGBTQ+ inclusive policy in higher education. In 2018, Maurer and Dean of Students Bonnie Prunty published a chapter detailing Ithaca College’s trans-inclusive housing measures in “Trans Policies and Experiences in Housing & Residence Life.” Maurer said the LGBT Center holds initiatives to educate community members on LGBTQ+ issues and work one-on-one with students to support them.

Freshman Jessica Theis said the accepting environment on campus was an important factor in her college search.

“As a queer person, I hope the center can continue to provide a safe environment,” Theis said.

Gallup reports that one in six adult members of Generation Z — those born after 1996 — consider themselves to be a member of the LGBTQ+ community. 5.6% of Americans identify with the label, which is the highest number ever recorded. Maurer said 30% of students at the college identify as LGBTQ+.

Now, the center has more space to expand programming and help community members. James said he was excited about seeing more opportunities within the program’s new home.

“It’s now finally getting the space and recognition we all knew it deserved for so long,” James said. “[It is] the biggest change for the better I’ve seen [in recent years], and it just fills my heart with so much warmth and happiness. I keep saying I can’t stop smiling, my cheeks hurt from smiling so much.”

The growth of the LGBT Center’s space reflects an ever-growing community of queer voices within Ithaca. Tompkins County has 499 same-sex couples in the area, according to UCLA’s Williams Institute. The county also ranks in the top 25 of U.S. counties in regards to the number LGBTQ+ individuals within the area.

“I have been at other institutions that don’t have a center like this,” Duckworth said. “They have one person. But to have a full–blown center with multiple rooms — with dedicated staff to make space on campus for queer students, queer staff, queer faculty — it’s fantastic.”

Maurer said flexibility for student needs is important in order to remain the “gold standard” for LGBTQ+ centers in higher education. With the advent of physical space comes the opportunity to expand capacities for mental, academic and emotional support. Both Duckworth and James emphasized the community that extends beyond the walls of the office, and now that community can fit within those offices as well.

“If you ever want a space to just walk in and be yourself and be loved, there is no better place than the LGBT center on campus to do that,” James said. “It’s such a space of love and acceptance.”

And while the center honors its history this year, Maurer said he and others will continue to support queer members of the campus community — past, present and future.

“LGBTQ students on campus shouldn’t just be accepted, they should be expected,” Maurer said.