Library archives reopen after shutting down for months 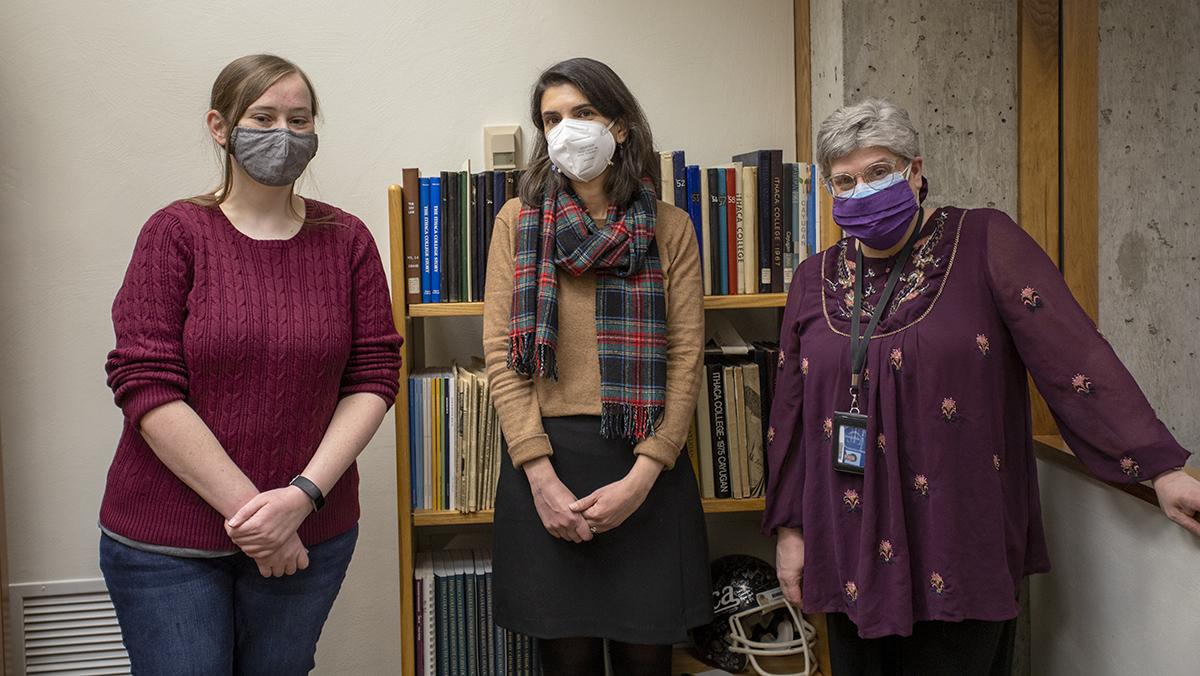 After an abrupt closure and months of uncertainty, the Ithaca College Library will once again be taking requests to view the college’s archives — a collection of thousands of digital and physical records that preserve the ongoing history of the college.

Interim College Librarian Karin Wikoff announced Jan.18, that the Ithaca College Archives and Special Collections would be open to limited services for Spring 2022. For the entirety of Fall 2021 the archives were shut down after the elimination of the archivist position. Requests to access archives are currently only being taken through an online form located on the library’s website. Wikoff said the archives team will not be taking on any long-term research projects and they are limiting the service to two or three archive requests a week.

For 33 years, Bridget Bower served as the college’s first and only college archivist. In June 2021, the college eliminated the archivist position and the service was temporarily shut down until the library could find a way to keep it running. Now, there is a three-person archivist team who work to maintain the archive service in addition to the ongoing responsibilities it has in their other positions. The archives team includes: Rachel Gay, cataloging and receiving specialist; Kate Payne, electronic resources and serials coordinator; and Terri Ann Coronel, electronic resources librarian.

Gay currently works on the archives two days a week trying to rearrange the space and organize the boxes of backlogged physical copies.

“At this point, we’re creating a plan of if we don’t get an archivist but the hope is that sooner than later we’ll have somebody who’s employed for this position,” Gay said. “I know we may not be able to reach previous staffing levels but [the library needs] the archivist and there are other positions in the library that have gone unfilled.”

Gay said she is handling all the work for the physical archives while Payne is focusing on the digital archives. Coronel has taken on the job of running the Digital Commons which is an online platform that features work like pre-prints, working papers, peer-reviewed journal articles, student honors papers, conference proceedings, data sets, presentations, film productions and images.

Bower did everything herself — work Wikoff said accounted for more than a full-time job — until the college eliminated Bower’s position and she retired. In December 2020 the college notified Bower her position would be reduced to part time, although her responsibilities stayed mostly the same. She decided she would retire in March 2022 because of her reduced position, but the college informed her in May 2021 that her position was being completely eliminated.

“We’ve just been sort of winging it ever since [Bower left], you know, whatever we can do to continue to preserve and make things work,” Wikoff said. “One area that is frustrating that we have not been able to do yet is to reestablish the broken ties of information flowing into the archives.”

Dave Maley, director of Public Relations, said there are currently no updates to the status of the archivist position.

“The college is continuing to evaluate its archival needs, which include working to ensure the preservation of materials and gradually increasing access to the collections as is feasible over time,” Maley said via email.

Wikoff said a massive amount of work has been put into reopening the archives, especially since Bower was the only one who had a grasp on where materials are located in the archives and what the job entails. The issue now is that there was a period of time between Bower leaving and the archivist team getting their footing where new records and information were not being received by the library. Wikoff said filling in information from the missing time period will be a big project.

As of July 5, 2021 the College Archives and Special Collections reported to have around 2,300 boxes and at least 200,000 digital objects — all different kinds of records related to Ithaca College like recorded sports games, photos, event flyers, protest signs and issues of college publications.

Cathy Michael, communications librarian at the college, said it will take time to get the archives processes running as smoothly. She said if she went to a college event she used to sometimes take flyers or pamphlets and bring them to Bower in the library for the archive.

“It’s really a way to keep track of the history of the college itself,” Michael said. “So, remembering the faculty, remembering the programs, collecting some of the documents and ephemera.”

Michael said that after Bower left, older physical copies of student transcripts were moved to the Office of the Registrar instead of being in the archives. She said Bower’s work needed to be picked up by someone and some pieces were delegated.

Wikoff said Bower did not have enough time to fully train them about the details of the archives, so Bower made a video of herself walking through the aisles of archives and telling the remaining staff what they needed to know. Wikoff said the conversations she has had with administration lead her to believe they understand the value of having a full-time archivist position. She said she thinks because of the college’s financial situation they are not able to reinstate the position.

“It is my hope, of course, that at some point in the not too distant future Ithaca College will get back on its financial feet and they’ll allow us to rehire an archivist,” Wikoff said. “I haven’t been promised that but that’s really the only way that we’re ever going to be able to have full service again.”