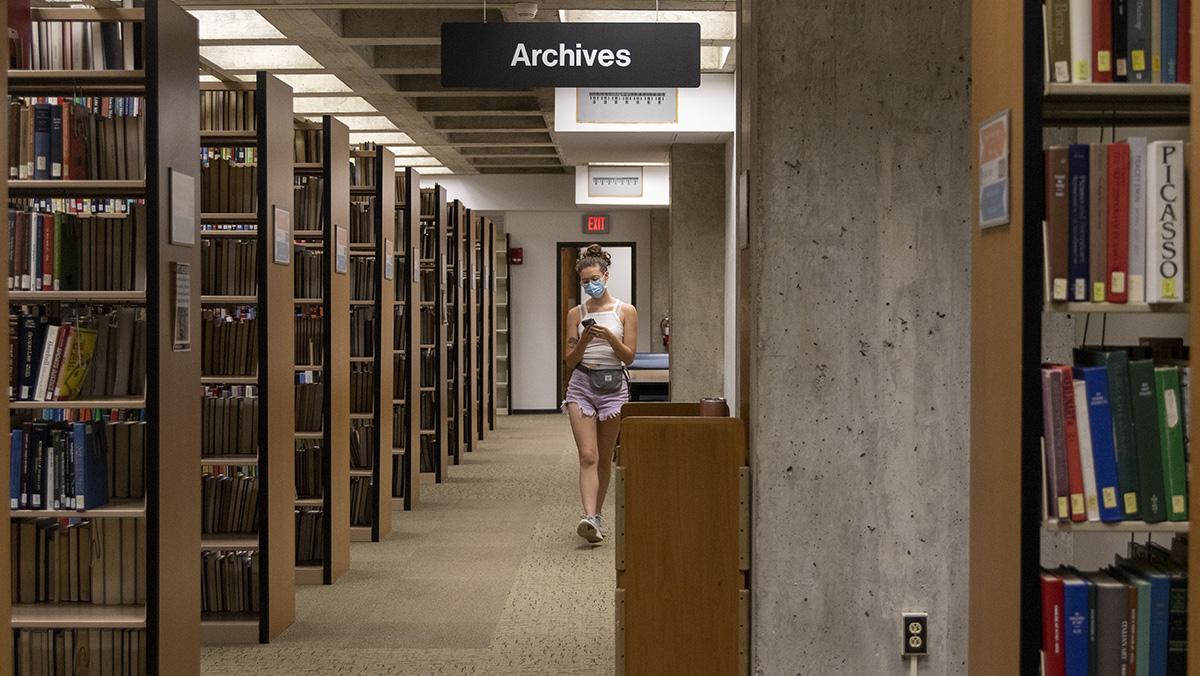 Ana Maniaci McGough/The Ithacan
According to an Intercom post July 5, the College Archives and Special Collections, located in the Ithaca College Library, now has around 2,500 boxes and at least 200,000 digital objects. Bridget Bower was originally hired in 1988 and served as the archivist for 33 years, the post stated.
By Syd Pierre — Assistant News Editor
Published: August 26, 2021

Bridget Bower, longtime archivist and librarian at Ithaca College, has retired following the elimination of her position. Consequently, the College Archives and Special Collections will be closed during the fall semester.

According to an Intercom post July 5, the College Archives and Special Collections, located in the Ithaca College Library, now has around 2,500 boxes and at least 200,000 digital objects, including the Rod Sterling Archives. Bower was originally hired in 1988 and served as the archivist for 33 years, the post stated.

Bower said she was informed in December 2020 that her position would be reduced in January 2021, meaning she would be relegated to working part–time, only working three days a week. She said she did not enjoy working part-time because while her time was reduced, her work responsibilities did not decrease significantly.

She said that because she disliked working part-time, she targeted March 2022 as the time she would retire, which would give her eight months to organize the archives.

At the end of May 2021, she was told her position would be eliminated, which she said came as a surprise to her. Bower said she had no idea who made the decision.

Hayley Harris, vice president of the Office of Human Resources, said she was not able to provide more information on the situation.

“I’m not going to comment on confidential personnel matters, and that includes sharing information on the status of individual positions,” Harris said.

Bower said she thought a longer transition time would have been more beneficial for both the collections and the college.

“What fascinates me is the powers that be — whoever they are — expected that archive services would continue on uninterrupted after I was gone,” Bower said. “Because I worked alone. Who do you think is going to, by osmosis, learn how to find things in the collections and answer stuff? I fear they didn’t actually think through what they were doing.”

Interim librarian Karin Wikoff said the archives will be closed for the fall semester while library staff work to organize it. She said it may reopen with limited access during the spring semester.

Wikoff said she submitted a project proposal to the Office of the Provost and Senior Vice President for Academic Affairs that would provide more funds for current library faculty to take on extra work stabilizing and securing the collection.

“Every unit that you talk to on campus right now will tell you that they are short staffed, and they will all be telling the truth because as a whole, the institution is eliminating a lot of positions, not just the archivist,” Wikoff said. “So that leaves fewer people to absorb the work that was being done by people who are no longer here.”

Senior Kellie Swensen said they thought that the timing of the decision was concerning, given the recent Academic Program Prioritization (APP) process. The process resulted in the elimination of 116 full-time equivalent (FTE) faculty positions and the Non-Academic Program Prioritization — which involved the examination of administrative, operational and staff functions at the college — has resulted in a number of administrative and staff eliminations.

“The history of this institution that is currently still in the making isn’t something that those in power at this institution have any interest in preserving, but I think it is in the best interest of the current and future campus community,” Swensen said via email.

Kristen Harrison ’20, said she worked with Bower to find photos for Year In Review, a publication produced by The Ithacan that summarizes the academic year at the college. Typically, the publication uses current photos of campus, but because the college was closed in Spring 2020 because of the COVID-19 pandemic, Harrison reached out to Bowers to use archival photos.

“I think she was fantastic,” Harrison said. “And she was just so friendly and passionate about all the archival material that was there, and very willing to share that with everybody who asked for it.”

Harrison said she was upset that Bower’s position was one of many positions that have been cut and thought the decision would be a loss for students who are trying to access materials for interviews, classes and projects.

“I think it’s just an example of how the college kind of lost some of the trust of its former students in a way, by eliminating the positions that we thought were really important and that really shaped our college career,” Harrison said.

Bower said that in June, she would have considered going back to work for the college, but she is now enjoying her retirement.

“At this point, I don’t think I want to work for Ithaca College again,” she said. “If in two years, the college says, ‘We want an archivist, you have first dibs,’ I’m going to say no. Because I like being retired, not having that schedule. And I certainly hated, hated, working part–time.”