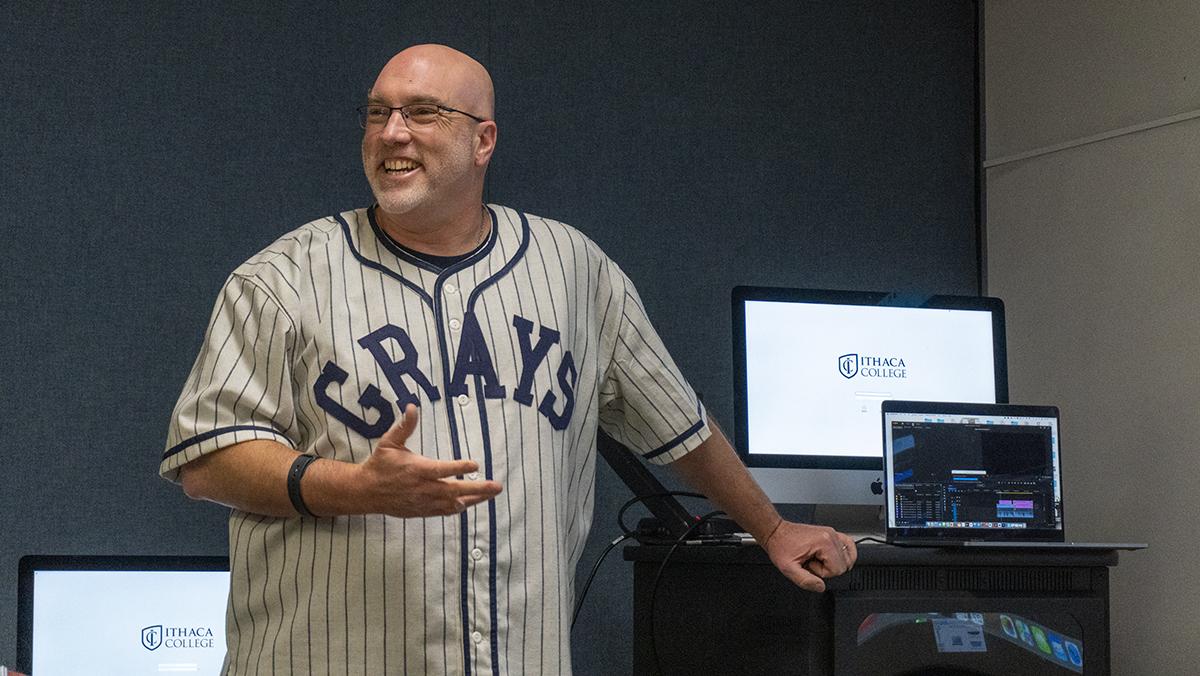 James Rada, professor and chair for the Department of Journalism at Ithaca College, announced Sept. 20 that he will leave the college after the 2022–23 academic year.

Rada has accepted a position as the coordinator for the graduate program in Mass Communication at Virginia State University (VSU), a historically Black college or university (HBCU) in Petersburg, Virginia. Before starting in person at VSU in August 2023, Rada will work remotely beginning Jan. 1, 2023.

“It’s an incredible opportunity,” Rada said. “Virginia State is a school that’s on the rise. … I’m excited to be a part of everything [VSU is] doing and everything that’s going on down there.”

Since 2013, he has led 13 experiential learning trips and produced two documentaries with students. The experiential learning trips were opportunities for students to travel all over the country and do live reporting on major events like the 50th anniversary of the Selma Marches. Rada said one of the documentaries, “With INFINITE HOPE: MLK and The Civil Rights Movement,” (2018) has aired 1,200 times on different public television stations since its premiere in January 2019.

Mead Loop, professor in the Department of Journalism and director of the sports media program, has worked with Rada since Rada began his career at the college.

“I don’t think anyone else has done more to give our students experiential opportunities, particularly covering the political economy and civil rights,” Loop said. “He has given students a lot of opportunities that they otherwise wouldn’t have had.”

In the 2017–18 academic year, Rada was awarded a Research to Enhance Academic Collaboration in Higher Education (REACHE) award by the college. This award assists in funding faculty and staff research initiatives. Rada said the funding from the REACHE award was used toward funding the MLK documentary. In the 2019–20 academic year, Rada won the Ithaca College Faculty Excellence Award, an award that recognizes faculty members’ excellence in teaching, scholarship, service and professional activity. Rada said he donated the award money to the NAACP.

Rada said he is amazed by the talent of faculty and students in the Roy H. Park School of Communications.

“All of my expectations were met and exceeded [at the college] and when I think back on my experience … I am absolutely awestruck and amazed by the level of talent we have in the Park School,” Rada said. “The time I’ve spent with the students … I would say it’s been a little slice of heaven.”

Tim Mirabito ’03, associate professor in the Department of Journalism, said Rada has been dedicated to his students and their success.

“[Rada] wants everyone within the [journalism] major to do well and to have the fundamentals to go out and be change agents,” Mirabito said.

Rada’s experiences and passions that he brings to the classroom enhance the learning experience for students, Mirabito said.

“[Rada] brought a really unique critical perspective to the classroom,” Mirabito said. “His research agenda is based on diversity and inclusion.”

Loop was on the selection committee when Rada was hired and said the Park School was looking to advance its video production instruction. Loop said he does not know what the Department of Journalism will look like once Rada departs. He said that with professor Anthony Adornato’s departure — who left the college at the start of Fall 2022 to teach at the School of Public Communications at Syracuse University — the college’s journalism department is low on staff.

“We hope that we’ll get at least one of those positions back in a search for a new colleague,” Loop said.

Junior Jess Moskowitz, a journalism major, has taken two journalism classes with Rada during their time at the college and said they appreciate his commitment to students.

“I think it speaks to him as a person, not just as a professor,” Moskowitz said. “Inside and outside of the classroom, he really sees you as a person and not just a student … [and] it’s really valuable.”

Moskowitz said they hope that students are asked to provide input into the selection of the next chair of the Department of Journalism.

“I’m concerned. I think there are a lot of gaps in the [communications] program,” Moskowitz said. “I think [Rada’s] presence has helped it a little bit but with that, I’m not really sure where it’s going to go from here.”

Students and faculty impacted by honors program phasing out