Mac’s accepts all forms of payment 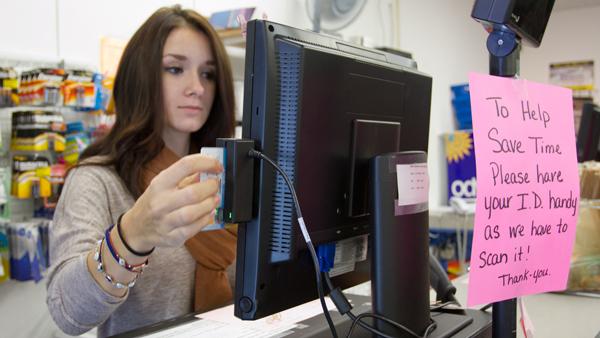 Nora Noone/The Ithacan
Junior Anna Angione, a cashier at Mac's, swipes a card after a student makes a purchase at the store.
By Lauren Mazzo — Staff Writer
Published: October 2, 2012

Rick Watson, director of the bookstore, said Mac’s switched in July from an outdated computer system to the same one the bookstore uses, which allows students to pay with credit or debit cards instead of just cash, Bonus Bucks or ID Express.

Watson said there might have been a slight rise in business since the change, but that it hasn’t had a substantial effect.

“People still spent money in there, whether it was ID Express, Bonus Bucks, cash, whatever,” Watson said. “But it’s more of a convenience thing.”

Senior Deborah Levy, who has worked at Mac’s for two years, said she thinks people buy a lot more now that there is no limit like there is with Bonus Bucks.

Students have been responding well to the new additions. Sophomore Katie McKenna, who shops at Mac’s, said accepting debit and credit is very helpful for students.

“There have been countless times where I would have purchased something from Mac’s but reached my limit of Bonus Bucks,” McKenna said.

With continuous visitors to Ithaca College throughout the year, Watson said he thinks the bigger impact on business will be from visitors rather than students.

“The biggest time it’s going to impact us is during Family Weekend, Alumni Weekend, tours and actually over the summer when there’s meetings with different organizations,” Watson said. “A lot of those people have expense accounts with a credit card, and they would rather use that than their own cash and get reimbursed.”

Sophomore Katelyn Boudreau, a student employee at Mac’s, said some students are very excited about the change, and many are taking advantage of it.

He looked into adding credit and debit card purchases to Mac’s last year but decided to wait until summer to change the entire system.

There is a fee [paid by the Mac’s] for each credit card transaction, Watson said, so the change could have been avoided in the past to keep pricing down for students. However, he said he doesn’t think the system change will actually increase prices in the store.

Other updates include a door that connects Mac’s and the bookstore, so purchases from both stores can be done in one transaction instead of two. The door is now open.

Watson said they delayed its opening because student traffic created by textbook purchases in the bookstore at the beginning of the year could clog the space in Mac’s and create long lines for students who want to make quick purchases. He is unsure of the long-term effects the door will have, but he said thinks it will make it easier for students to purchase a variety of items in one place.

“We’re not sure how that’s going to affect us,” Watson said. “We’re not even sure if we’re going to keep [the door] open all the time. It’s kind of a test thing for us.”

McKenna said she thinks the update makes a lot of sense.