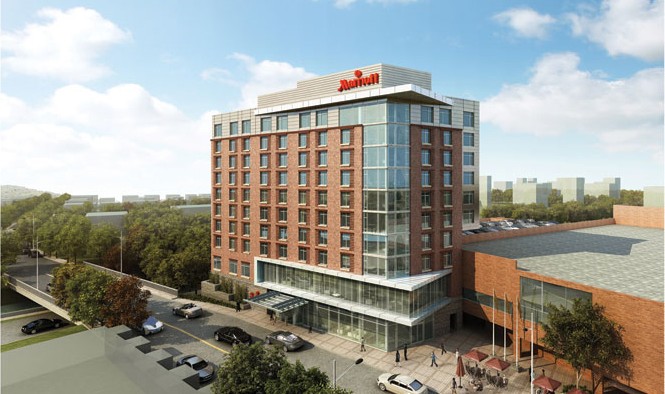 Courtesy of Urgo Hotels
A design of the proposed Marriott hotel on South Aurora.
By Patrick Feeney — Staff Writer
Published: September 13, 2012
A proposal to build a 159-room Marriott hotel on South Aurora Street is awaiting approval from Ithaca’s Planning and Development Department this month.
JoAnn Cornish, director of planning and development, said the project has been in the works since 2008, when property developer Jeffrey Rimland proposed construction of a hotel on his property. Cornish said the project took off in the past six months, when Rimland partnered with Marriott International to bring the chain to Ithaca.

If approved, the building will be completed with conference space and a restaurant. It will be erected on the east side of The Commons next to the Green Street parking garage.

Other additions to hotels are also taking place across Ithaca. The Marriott will join a new Fairfield Inn, which will be located on Route 13, and planned expansions to the Holiday Inn.

Fred Bonn, director of the Ithaca/Tompkins County Convention and Visitors Bureau, said the growth of hotels in the city is an indicator of interest in the market.

“This is a great sign for our city,” Bonn said. “I think we’re one of the few cities that’s seeing this level of interest in development of their downtown core in the Northeast.”

Cornish said hotels in the area often have few or no vacancies.

“They often end up sending guests to other communities,” Cornish said.

The Marriott Hotel, if approved, will rise alongside a major revitalization project on The Commons. Cornish said the new hotel partly spurred the $7-8 million renovations.

“The Commons is upward of 40 years old now,” Cornish said. “It needs a lot of work done on it. So, we are planning to make it worthy of having a Marriott, and this will be one of their top-of-the-line Marriotts.”

Some of the business owners within The Commons are looking forward to the new business the hotel will bring. Dean Zervos, co-owner of Simeon’s Bar and Grill, said the possibility of having so many rooms close to his restaurant could improve business.

“People get out of the hotel, what do they want to do?” Zervos said. “They want to eat, so I think the closer [the] better.”

However, Akira Sakoda, manager at Viva Taqueria, said she isn’t expecting to see a serious change in clientele once the hotel is finished.

“We’ve been in town for 20 years,” Sakoda said. “Our local clientele are extremely loyal and students love us. That’s not going to change because we have a hotel in front of us.”

Owners of local lodgings, such as bed-and-breakfasts, feel similarly. David Dier, innkeeper at the William Henry Miller Inn, said his business is always full and he doesn’t expect to see changes.

“You’ve got people who come here partly because of the amenities, and then you’ve got other people who are just coming to see people,” Dier said. “A hotel works for them. It’s a place to get sleep, get breakfast, and go.”

Bonn said the new additions to Ithaca’s hotel selection will not affect the area’s current establishments.

“They’re reaching a little different type of traveler that is used to staying in a flight hotel property,” Bonn said of the city’s bed and breakfasts. “They are in the city delivering some very unique and memorable experiences that you just can’t find at a traditional chain hotel.”

Cornish said the chances of the hotel being approved are very good, and the plans could be approved by the end of the month. The 18-month construction schedule would begin this fall, weather permitting, or by March 1.

Cornish said she thinks the hotel will improve the aesthetics of The Commons.

“It’s a beautiful building,” Cornish said. “It will be an iconic piece of architecture for The Commons.”