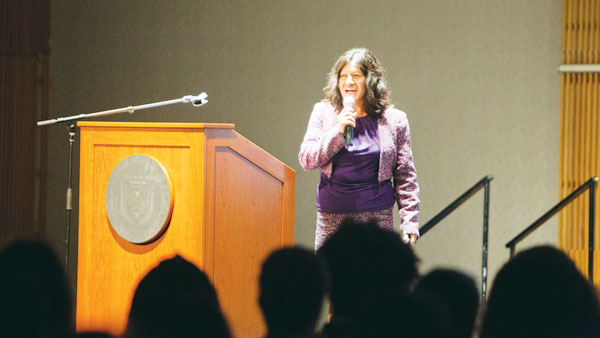 Her name means “liberty” and “peace” — the two ideals for which Mexican-American social activist Librada Paz fights and which Ithaca College commemorated under one “Single Garment of Destiny,” the theme for this year’s Martin Luther King, Jr. Day celebration.

The MLK Celebration Committee selected Paz, the 2012 recipient of the Robert F. Kennedy Human Rights Award, to be the keynote speaker for the MLK Celebration Event at 4 p.m. Jan. 20 in Emerson Suites. She spoke of her 15 years as a migrant farm worker in New York state and her current line of work for the Rural and Migrant Ministry, a nonprofit dedicated to improving the welfare of farm workers in New York.

Paz said she lives by the words of King and directs her passions to creating awareness about the struggles of farm workers, she said, who are still not guaranteed days off or disability insurance.

“You see an apple, it’s very shiny — think about the farmers who picked that for you,” she said.

The RFK Human Rights Award was established in 1984 to honor those who make extraordinary contributions to a human rights issue. Paz said the recognition granted by the award helped Paz work with the Rural and Migrant Ministry to improve the lives of disenfranchised farm laborers.

“Imagine the time that people were slaves,” Paz said. “A lot of the farmworkers were slaves, and since that time, they’ve excluded farmworkers from having equal rights with other industries, and I think it’s just ridiculous that it hasn’t changed.”

In her address, she encouraged students to become educated in human rights and push for the passage of the Farmworkers Fair Labor Practices Act, which would ensure farmworkers are not exempt from the standards held for other workers under the National Labor Relations Act.

The first half of the Celebration Event featured a presentation by the MLK Scholars of the Class of 2017, who reflected on their Civil Rights Tour during fall break. Through the media of song, skits and testimonials, students shared how the trip affected their views of civil rights and the meaning of service on MLK Day.

“These 16 lives have seen ancestors suffer through the pain, yet through the ashes of this pain, a phoenix does arise,” freshman MLK Scholar Joshua Dufour wrote in a poem that all 16 freshman scholars recited during the event.

Reflecting on the ceremony, freshman Garrett Garneau said he has high expectations for his future as an MLK Scholar.

“All the possibilities from here on — there are a lot to look forward to,” Garneau said.

The Celebration Day began the week of commemoration for the college. As a part of the MLK Day of Service on Jan. 25, 135 students will volunteer with nine local organizations, including the Salvation Army and the New Roots Charter School, Don Austin, Celebration Committee member and assistant director for community service for the Office of Student Engagement and Multicultural Affairs, said.

The service day reached its capacity of student volunteers within two weeks, the shortest sign-up period in the history of its occurrence, Committee Chairman John Rawlins III said during the celebration event.

Austin said the closeness of the farmworker labor issue is an eye-opening lesson for students.

“When a lot of people think about injustices against immigrants in the United States, they tend to geographically focus on the southwest of the U.S.,” he said. “We have those same issues right here in New York state.”

The locality of issues and the concept of citizenship and belonging were the themes of the kick-off event, during which Austin showcased the history of student activism at the college and, subsequently, three professors gave their individual takes on these concepts of belonging.

One of the speakers was Carlos Figueroa, assistant professor of politics, who has taught at other institutions prior to coming to the college this year.

“This program is one of the more substantive programs I’ve seen — we’re not romanticizing MLK and taking him out of context, and it’s flexible enough to think about not only his legacy, but how to apply his principles to our own lives,” Figueroa said.

MLK Day at the college has placed an emphasis on personal involvement in social activism and created awareness of how many of our actions directly or indirectly affect everyone else, Austin said.

Senior Cedrick Michael-Simmons, president of the SGA and an MLK scholar, gave an opening address in which he referenced the words of King.

“Once we … remember that we are caught within an inescapable network of mutuality, tied in a single garment of destiny, then the opportunities for resistance to racism, sexism, classism and the many other kinds of -isms become a matter of responsibility,” he said.