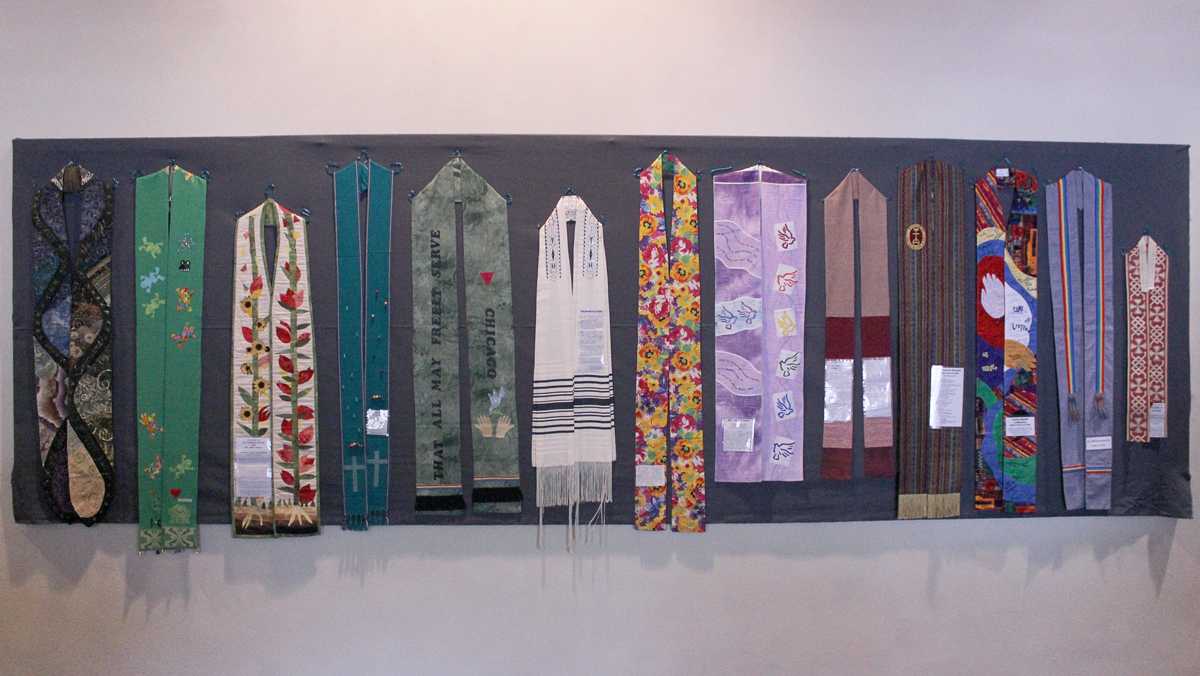 The Shower of Stoles Project on display in Muller Chapel shares the stories of people like Bushby — every stole represents an LGBTQ person of faith.

The National LGBTQ Task Force organized the Shower of Stoles Project, which is a collection of approximately 1,500 liturgical stoles that represent LGBTQ individuals’ presence in 32 religious denominations. Stoles are garments mainly worn in Christian denominations by clergy members. The collection also contains other religious garments from non-Christian religious leaders.

The task force created the collection in 1996. It tours the country and is exhibited at local churches, events and denominations, said Victoria Kirby York, the deputy director of the National LGBTQ Task Force advocacy and action department. Kirby York said the collection was not planned, and it started after an anonymous stole was sent to the task force by an LGBTQ person who was exiled from their church.

Exhibits are requested through an online form and cost $100 for 50 stoles. The college’s exhibit contains 100 stoles that are displayed on rotation at the two main entrances of Muller Chapel. This exhibit will be until the end of the month.

Luca Maurer, director of LGBT Education, Outreach and Services, said he has been advocating for the college to host this project since he first saw it over 10 years ago at an LGBTQ conference. He said he did not receive enough support for the idea until Hierald Osorto, director of the Office of Religious and Spiritual Life, came to the college in Fall 2018.

Osorto said he was interested in bringing the project to the college because he thinks it reflects the diversity of the college community.

“As the chapel, we are part of the Ithaca College community, and it is an expression of this diverse community,” Osorto said. “So I think it should be reflecting that in the ways that we curate the space that people have access to.”

Every stole in the collection is accompanied by a note with a message from the sender and the name of the person it represents, but Maurer said approximately one–third of the stoles are anonymous.

“I think the Shower of Stoles Project is very deep and meaningful both in what it shows us and also what is purposely hidden,” Maurer said.

Bushby said she noticed a stole that explained its anonymity, saying the sender could not use their name because they had not come out to their religious community.

“I thought that was really powerful and that it was kind of heartbreaking, but, also, I appreciate that they’re sharing their stories somewhere and with someone,” Bushby said.

Kirby York said that when the project started, the task force received many stoles representing people who were not accepted by their religions, but, over time, the project began to receive stoles with stories of clergy members who were able to be open about their sexual identities and remain in their religious organizations.

Maurer said one of his goals in bringing this project to the college is to make people more aware of the intersections of LGBTQ people and religion. As of 2017, 54% of LGBTQ people in America were affiliated with religion, according to the Public Religion Research Institute.

“I particularly think it can be important for non-LGBTQ people to recognize what has always existed,” Maurer said. “It’s not just a fallacy but a luxury born of privilege for folks to think of religion and faith and spirituality as if they don’t involve LGBTQ folks.”

Bushby said she feels that LGBTQ people of faith are making their presence in religious communities known despite many churches’ opposition to the LGBTQ community.

Senior Kayla Shuster is an LGBTQ-identifying council member of the Lighthouse Christian Fellowship, formerly called the Ithaca College Protestant Community. She said she experienced hostility from members of religious organizations on and off campus when she arrived at the college.

“I always thought of Ithaca as being the second most queer–affirming schools in the nation and I fully expected that this would be a place that I could be out and proud,” Shuster said. “Even in a really liberal space like Ithaca College, there were still people who weren’t affirming.”

The Lighthouse Christian Fellowship has faced criticism for exclusionary behavior toward LGBTQ members of the community.

She said she chose to remain in the Lighthouse Christian Fellowship so she could help the community become more inclusive of gender and sexual identities.

Senior Serena Velazquez works in the Office of Religious and Spiritual Life as an interfaith program assistant and identifies as LGBTQ. She said she stopped going to church when she was in middle school because she felt the Roman Catholic church she attended was exclusionary.

“I was really skeptical of the things my church would say about things like women’s rights, … and once I started to realize that I was gay, I couldn’t unsee the homophobia and how deeply engrained it was,” Velazquez said via email.

As an interfaith program assistant, Velazquez said she helped Osorto with the logistical aspects of bringing the project to campus and assisted in setting up the display.

“Even though I no longer consider myself a Christian, I felt emotional setting up the stoles and reading the stories,” Velazquez said. “I felt intensely sad thinking about people shunned by their religion for being in the community.”

Bushby said she thinks that there is no strict way to practice religion and that practicing in a way that shows love is a way to show faith.

“Just because the rules or the law is appointing a discriminatory standard doesn’t mean that’s really what faith is,” Bushby said. “When it comes to faith, in my opinion, there is no exact way and no correct way to do it, but as long as you practice in whatever way works for you and as long as you show love, that’s what faith is.”