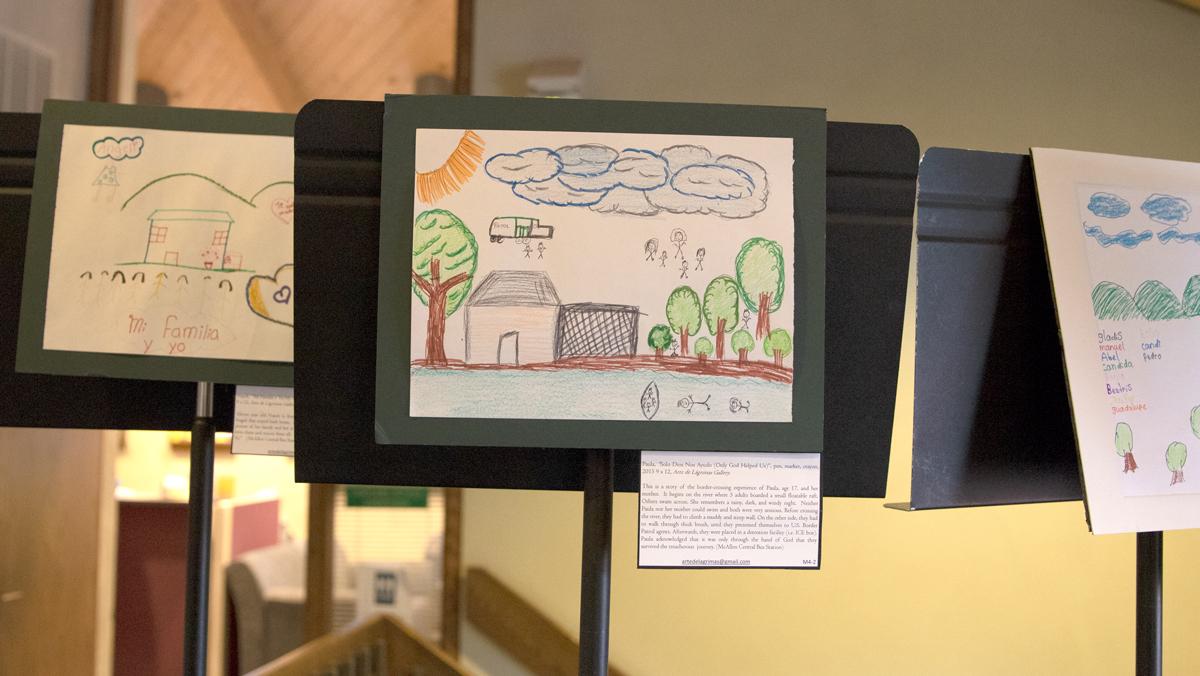 An event was hosted in Muller Chapel to discuss immigration, faith and the border with guest speaker Gregory Cuéllar as the final event in the three-part Interfaith Immigration Series.

The Refugee Artwork Project was inspired by a surge of asylum-seeking, unaccompanied children coming from Central America in 2014. Cuéllar said the project is a traveling exhibit of drawings created by Central American refugee children crossing the Texas-Mexico border and aims to raise awareness for the refugee crisis. Cuéllar said he was overwhelmed by the wave of help at the U.S.-Mexico border in response to the surge of asylum–seeking children in 2014 and was not sure how he could add to the support.

Cuéllar gave a lecture Dec. 5 in Muller Chapel to speak on immigration and the Refugee Artwork Project. A small sample of the artwork, which he brought with him, was on display in Muller Chapel from Dec. 5 to Dec. 12.

The Interfaith Immigration Series events were held the fall semester to create a dialogue about immigration on campus. All of the events were hosted in Muller Chapel. The series opened with an hourlong discussion with Patricia Rodriguez, associate professor and Latin American studies coordinator in the Department of Politics, on the Rapid Response Network and Hotline for Immigrants.

Cuéllar said he set up an art station in McAllen, Texas, because a lot of families were entering the United States there.

“As they were leaving, they gave us the art as a gesture of appreciation,” Cuéllar said.

Once Cuéllar started to accumulate many paintings and drawings, he went back to Austin, Texas, and partnered with churches there to develop art exhibits. He said the art was hung on cages in frames of little cages. The cages symbolized from where the children seeking asylum came.

Cuéllar said he put the art online to raise funds and take the exhibit to more places.

Because the last event in the college‘s Interfaith Immigration Series had to be related to art, and Osorto had previously worked in McAllen, Texas, with Cuéllar, he decided to bring him and his art to campus.

“I thought it would be the perfect way to end our conversation around immigration,” Osorto said.

Osorto said he went with Cuéllar to the bus stations where migrants would arrive in Texas.

“I was taken aback by the number of children that were present with their family members,” Osorto said. “I think the word that stands out for me was heartbroken.”

Osorto said his role was to talk with the children and learn more about their stories. He said he heard stories of how family separation prevented children from having a normal childhood.

A lot of the children Osorto has worked with came from Central America, and he said he feels a personal connection with them because his family is from El Salvador. He said he had family members who were either killed or went missing because they were caught in the Salvadoran Civil War that was going on in the ’80s.

“My family came here fleeing a war,” Osorto said. “And to still see that continuing makes me question what is happening that it’s creating these ongoing conditions that are making families have to leave. … I wanted to see who these kids were.”

He said this connection sparked his curiosity into the work that Cuéllar was doing with the Refugee Artwork Project.

“At a personal level, I wanted to know how my own personal tradition, which is Christianity in terms of religion, informed my public response,” Osorto said.

Cuéllar said he was happy to bring the exhibit to campus because he wanted to initiate that dialogue to the Northeast. He said there are large populations of immigrants in New Jersey and New York.

“I would encourage students in the IC community to take advantage of this exhibit,” Cuéllar said. “Go and study the art.”

“I was motivated to go because immigrant rights are a big problem right now,” Foster said. “I was looking for any sort of ways I can help raise awareness.”

She said that while the paintings were saddening, they were also powerful.

“It was really powerful and moving seeing the children’s actual artwork,” Foster said. “What got me the most was how they were depicting their symbols from home, and a lot of them had religious symbols in them, which is a big part of my life.”