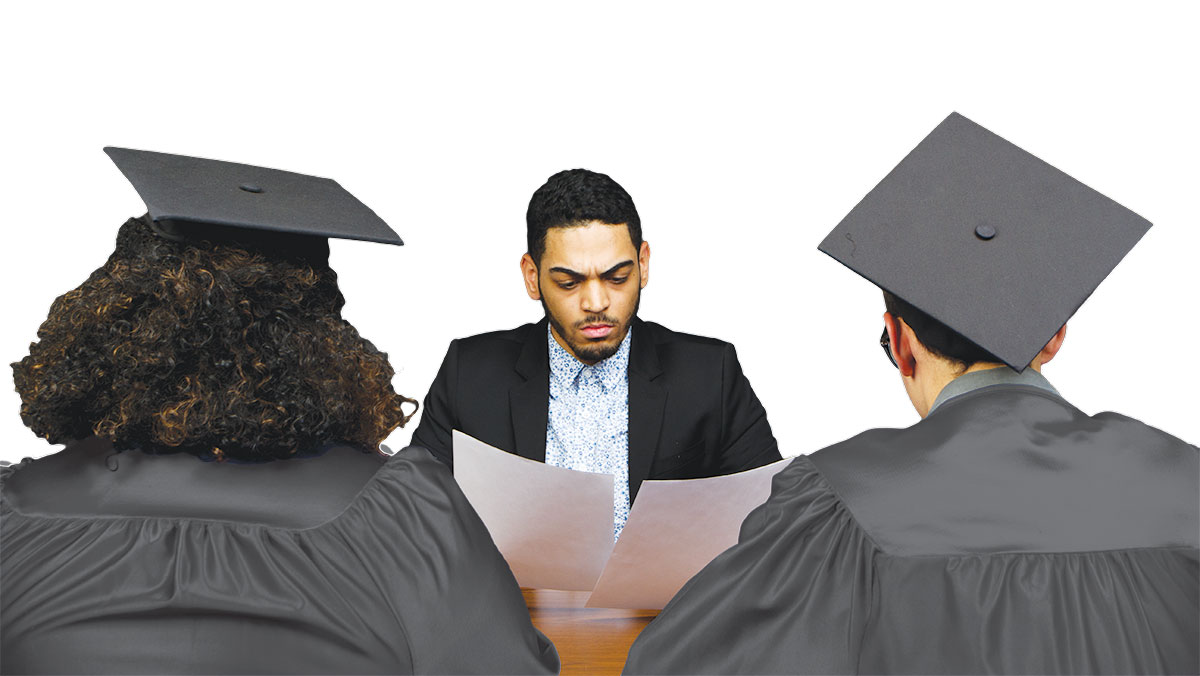 Photo Illustration by Corey Hess/ The Ithacan
The Association of American Colleges and Universities released a report Jan. 20 called “Falling Short? College learning and career success,” which said while 80 percent of employers believe the skill of applying knowledge to real-world settings is “very important,” only 23 percent think students are well prepared with this skill.
By Kayla Dwyer — News Editor
Published: February 4, 2015

The discussion of preparing college students for the workforce has been riding the tide of the 21st century, but with increasing perception gaps among students, employers and active members of the higher education community, the question remains as to what it means to be prepared — and if students truly are.

The most recent national outlook would indicate a grim state of affairs, but Ithaca College is beginning to offer more outlets to foster the skills employers deem necessary in the changing scope of the workplace.

The Association of American Colleges and Universities released a report Jan. 20 called “Falling Short? College learning and career success,” which said while 80 percent of employers believe the skill of applying knowledge to real-world settings is “very important,” only 23 percent think students are well prepared with this skill. In 2007, 73 percent of employers said colleges should place more emphasis on this skill.

Forty-four percent of the 400 employers surveyed this year said students are not at all prepared, according to the 2015 study.

The AAC&U report also indicates a large perception gap: Students perceive themselves as much more prepared than employers think they are.

In the areas of critical and analytical thinking, 66 percent of the 613 college students surveyed upon graduation said they felt well prepared with these skills, while just 26 percent of employers expressed the same opinion.

Sophomore Joe Yull said he is not surprised by these results.

“Of course we think that of ourselves,” he said. “People tend to think pretty highly of themselves. The employer perception is probably truer than the student perception.”

More of the perception gap, however, may be attributed to a misconception of what exactly is defined in the qualities employers are most looking for in college graduates, according to the AAC&U study: critical-thinking skills.

Robert Sullivan, chair of the Department of Communication Studies and associate professor of culture and communication, describes critical thinking as a healthy skepticism, requiring students to think about their thinking, a step beyond problem-solving skills.

“It’s a rigorous investigation into your own beliefs and statements around you,” he said. “It’s also about attitude — don’t take things at face value.”

Danette Johnson, vice provost for academic programs, said the AAC&U research is what guided the planning for the Integrative Core Curriculum, instituted in the fall of 2013.

Sullivan co-chaired the taskforce to create ways of integrative learning at the college, along with Leslie Lewis, dean of the School of Humanities and Sciences. He said the ICC was designed to have critical thinking at the focus, rather than having a general education program composed of disparate disciplines, but that the curriculum has yet to reach its full potential.

“We wanted to create a set of rigorous courses that would examine complex problems through a variety of lenses,” he said. “It’s not quite there yet.”

Regardless, the program reverts away from making what Sullivan said is the mistake of over-emphasizing the aspect of specialization.

“Don’t mistake your major for your college education,” he said.

Accordingly, 60 percent of employers in the survey believe students need both specific and broad knowledge to be successful.

Dawn Kline, assistant dean at the business school, said the ICC offers a sense of universality to students in professional schools who are choosing to specialize in particular professional skills.

“It’s taking liberal arts requirements for professional schools and giving them a sense of cohesion and purpose,” she said.

She said these ideas are reinforced by alumni when they return to the school and bring the message that it is important to gain a broader scope of skills and knowledge.

In the Roy H. Park School of Communications, the major degree requirements include credits outside of the Park School, as Sullivan pointed out. For example, the television-radio department requires a minimum of half the students’ credits be designated as liberal arts. In addition, the journalism major requires students to enroll in a minor outside the Park School and achieve proficiency in a foreign language.

To foster the critical-thinking skills employers desire, Kline said what have emerged in more business classes today are interdisciplinary case studies from real businesses and industries and a larger emphasis on experiential learning. Participating in student organizations, business competitions and case studies, she said, allow students to develop the sense of adaptability that is necessary to be successful in a world of technological and social change.

Sharon Stansfield, chair of the Department of Computer Science, said the ability to work and change with technology is not exclusive to computer science or tech students — all students should have some sort of computer-based competency to accompany the soft skills of effective communication and interaction.

“Students should come out with a multidisciplinary knowledge and an understanding of how important technology is,” she said.

Nathan Prestopnik, assistant professor of computer science, said there is only so much that professors can do to equip every student with these skills of critical thinking, analytical problem-solving and applying knowledge to real-world settings.

“The students who graduate prepared are the ones who showed up ready to prepare,” he said.

Senior Justine Gray said the experience that invoked her critical thinking skills the most has been her psychology research team, a three-semester long requirement for the department.

“It gives me an opportunity to work on things by myself and actually talk about my personal theories,” she said.

Sullivan said the college’s core curriculum places it in a better position to provide students with opportunities to develop critical skills through a wealth of connected courses.

As per the ICC, Johnson said students should take courses from a variety of perspectives within their theme to answer a common big-picture question.