New bike-share program to be implemented in Ithaca 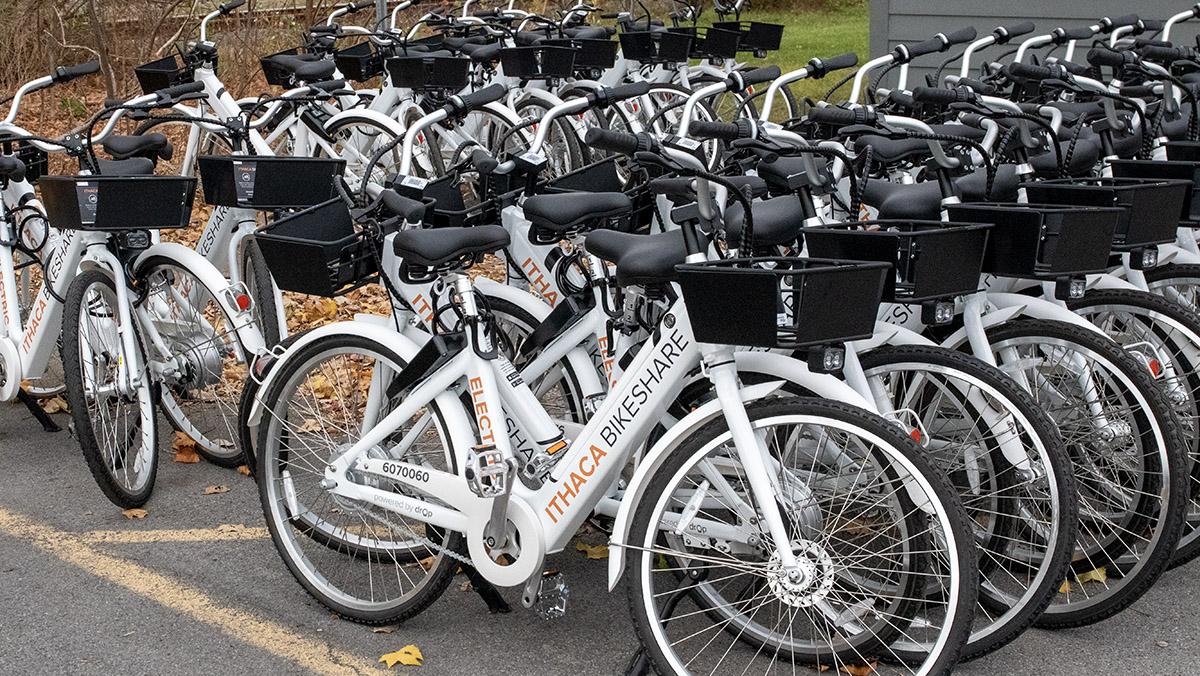 The Center For Community Transportation (CCT) in Ithaca reached an agreement with the Common Council on Nov. 2 to implement Ithaca Bikeshare, a program that would scatter electric bikes around Ithaca. The organization is attempting to make a deal with Ithaca College to allow the bikes to be ridden on campus, but no agreement has been reached.

The CCT is planning on launching the service during the second week of November. Jeff Goodmark, director of micromobility at the CCT, said the program would be similar to the bike-share programs in bigger cities like Citibike. Users will need to make an account on an app prior to using the bikes, which are dockless and can be found anywhere. Unlocking the bike will cost $1 and the user will be charged 15 cents for every minute ridden. The user can end the trip by automatically relocking the bike between sidewalks and curbs and next to bike racks.

Goodmark said he would like to see the bike-share program on campus, but the agreement between the organization and the college has been stalled despite the college suggesting it may support the program.

“I think that the success of Ithaca Bikeshare is pending a number of things, and a lot of it is getting an agreement in place with Ithaca College and with Cornell University,” Goodmark said.

Goodmark said the company wants to provide different modes of transportation around campus besides just motor vehicles for people who live far from their classes.

In April 2018, Lime, an electric bike and scooter rental service, introduced e-bikes in Ithaca, but in June 2020, Lime decided to permanently remove the service from Ithaca because the bikes were not making enough money.

Goodmark, who was the operations manager for Lime during the time the program was in Ithaca, said the new bikes are an improvement from the previous Lime bikes. The bikes are class one pedal-assist electric bikes, meaning they have a motor and only assist the user when they are pedaling. The bikes can reach a speed of 20 mph.

“The bike itself is a better bike,” Goodmark said. “It is lighter, its center of gravity is way more balanced, it is a little bit more efficient and smoother operation, so it would be a better user experience overall.”

Scott Doyle, director of Energy Management and Sustainability at the college, said a collaboration between the college and the CCT is a positive start for more sustainable modes of transportation in Ithaca and that having a bike-share program will influence people to reduce car trips.

“I think this initial rollout … may spark some actions for people to get out of a car,” Doyle said. “When [the CCT] fully builds this out, we will see more of an impact. It’s just one more piece — if we are promoting [the bike-share program] in addition to walking, buses and carpooling, I think that can only help in reducing vehicle miles traveled.”

Bike-share companies have seen much success in bigger cities. In the nine years Citibike has been in service in New York City, there have been over 100 million trips completed and a membership spanning over 143,000. Anytime a bike is chosen over a car, carbon dioxide emissions caused by that car are not released. B-cycle, Denver’s Bike-share service, saw that 41% percent of the trips users took on the bikes replaced car trips. The service has saved Denver an estimated 1 million pounds of CO2 emissions.

Doyle said Lime bikes were not allowed on both the Ithaca College and Cornell University campuses, but since the bikes are now locally owned, the agreement could change.

“The previous Lime bike was very popular around town,” Doyle said. “Both at Ithaca College and Cornell, Lime bikes were not formally allowed because of liability issues. So hopefully this new locally controlled effort from the CCT will be structured in a way people will become comfortable with the liability and other concerns.”

Doyle said that helmets were not provided for users who rode the Lime bikes and the bikes would be placed in unsafe locations. Goodmark said there were many reasons the Lime bike deal did not go through with the colleges but declined to comment on the specific liability issues.

Sophomore Ally Alfred said she does not like walking down and up hills because of her asthma and having the bikes on campus would allow for easy transportation.

“I was actually looking into getting a bike of my own and this would be a perfect opportunity for me to have access to [bikes] whenever I need without actually purchasing a bike,” Alfred said.

Alfred said she is worried that if there are too many bikes situated around campus, there may be a rise in injuries if people are not careful with the bikes.

“[I am worried about] maybe just injuries, but overall [for] getting around, I feel like it would be beneficial because there are not a lot of accessible places [for walking] here on campus, especially for people who cannot walk too much,” Alfred said.

Sophomore Isabelle Magre said the bikes are good for the environment, but using them on campus or in the snow would provide logistical issues.

“I feel like on campus not many people [would] accept it because our campus is located on a hill, so getting anywhere you would have to go up and down stairs,” Magre said.

Magre also said that college students would not be the most trustworthy demographic for rented bikes.

“A lot of college kids do stupid stuff, so I feel like the bikes would get broken very fast,” Magre said.

First-year student Andrew Levin said he would use the bikes to get around downtown because of how easy getting around on a bike would be.

“If you don’t have a car, the only way to get downtown is either walking or taking the TCAT, and the TCAT is very unreliable at times,” Levin said. “I think getting [the bikes] down there, especially for exercise purposes, would be really great.”

Ryan Johnson can be reached at rjohnson4@ithaca.edu

On the right track: Bike culture at Ithaca College