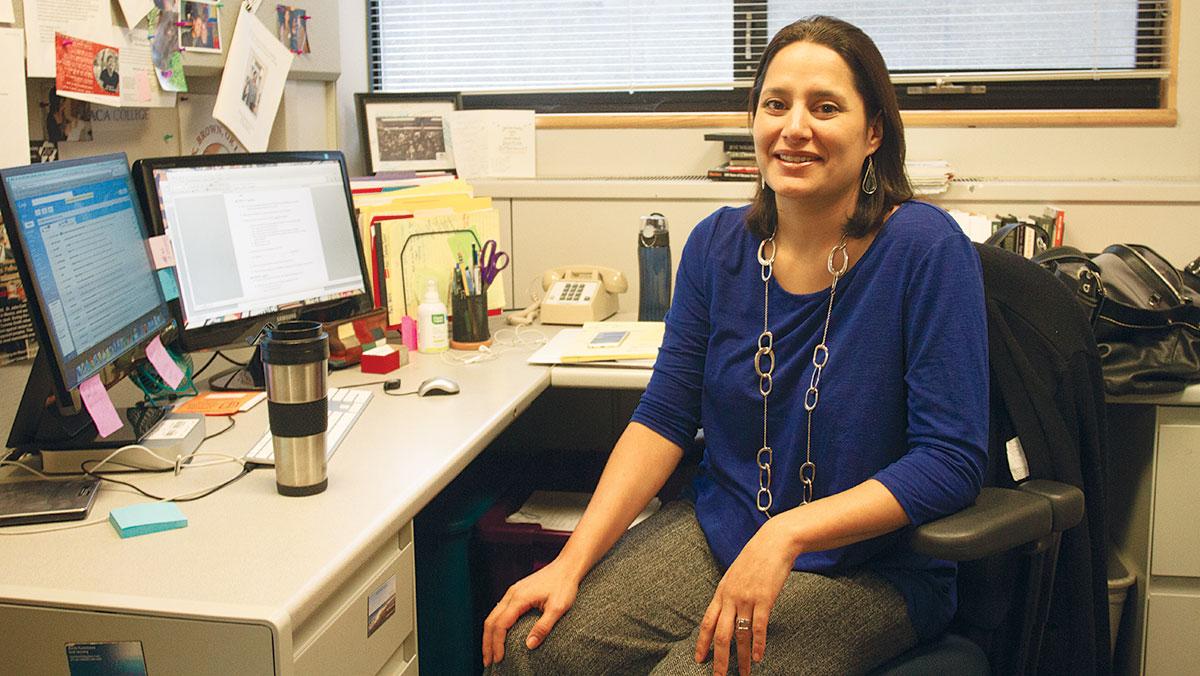 Amanda den Hartog/The Ithacan
Belisa Gonzalez, associate professor in the Department of Sociology, has been named director of the Center for the Study of Culture, Race and Ethnicity.
By Sharon Mejia — Contributing Writer
Published: December 10, 2014

The Center for the Study of Culture, Race and Ethnicity will have a new director as of next fall. Belisa Gonzalez, associate professor in the Department of Sociology, will be replacing Asma Barlas, current program director of the CSCRE.

Since arriving at Ithaca College in 2007, Gonzalez has been an active member of the CSCRE and of the Department of Sociology. She recently led a workshop called “Navigating Micro-aggressions, Micro-inequities and Unconscious Bias,” where faculty, staff and students joined the discussion on micro-aggressions and unconscious biases in society.

Contributing Writer Sharon Mejia spoke with Gonzalez about her future plans as the new director, her micro-aggressions workshop and how she will apply the workshop to her new job.

Sharon Mejia: What went into your decision to accept the position of Center for the Study of Culture, Race and Ethnicity Director?

Belisa Gonzalez: I got in the Discussion Series Committee, and eventually the professors there became my colleagues and some of them my close friends. It was a place on campus, in addition to the sociology department, where I can have intellectual conversations. … So when I found out Dr. Barlas was returning to politics, I started thinking about what it would be like to join the faculty as the director and decided to apply. I was then offered the position and decided to accept it because it feels like an equal home to me here at IC. I am excited to be able to integrate the pursuit of social justice front and center in my work.

SM: As the new director, what are your goals or plans for the center?

BG: My first goal is to sit down with [faculty] and make sure that they are in good positions to receive tenure and that they can be the faculty that they want to be. … The other thing is that we are getting a lot of attention on revamping the Native American Studies minor, and we are working that into an Indigenous Studies minor. So while we have a Native American Studies minor right now, we as the center do not have a full-time faculty that is dedicated to the Native American Studies line, which makes it difficult to consistently offer classes in that minor. Also, I believe there are conversations about revamping the Discussion Series. … Very rarely it is an actual true discussion, so maybe we can work towards more of a dialogue and all that would be collectively decided. The other thing is that I do work through the Center for Faculty Excellence on excellence inclusion on hiring, so I give workshops to faculty and staff who are on search committees to talk about the literature on unconscious bias and how that shows up in the search and hiring process.

SM: How would you go about getting the Ithaca College community more involved with the CSCRE?

BG: One of the things that I can think about in terms of revamping the Discussion Series is to have students provide feedback on what kind of themes and speakers they would want to see. We are limited in the speakers we can bring, but we are also limited in our knowledge of who might be able to speak on particular topics. One of the ways to get people involved is not wait for them to come to you, but for you to come to them.

SM: You recently led a workshop on navigating micro-aggressions. How was the workshop received?

BG: It was for faculty, staff and students, so it was a good mix. I actually have not seen the evaluations yet, but the immediate feedback I got was that it was very helpful and timely.

SM: What can you take from the workshop that you would like to apply to your new job?

BG: The idea about micro-aggressions and any sort of unconscious bias that you enact is that we are never done learning because the source of those things is socialization. Socialization is a lifelong process, so unlearning those biases is a lifelong process. As I move into the new position, I think it is very important for me to remember that there will be a steep learning curve. … Anytime we think that we sort of have it figured out, that is when we are in trouble because it’s a constant process. That is one of the things I try to say with micro-aggressions, and I try to give an example of myself who studies this stuff, who writes about it and gave a workshop about it.