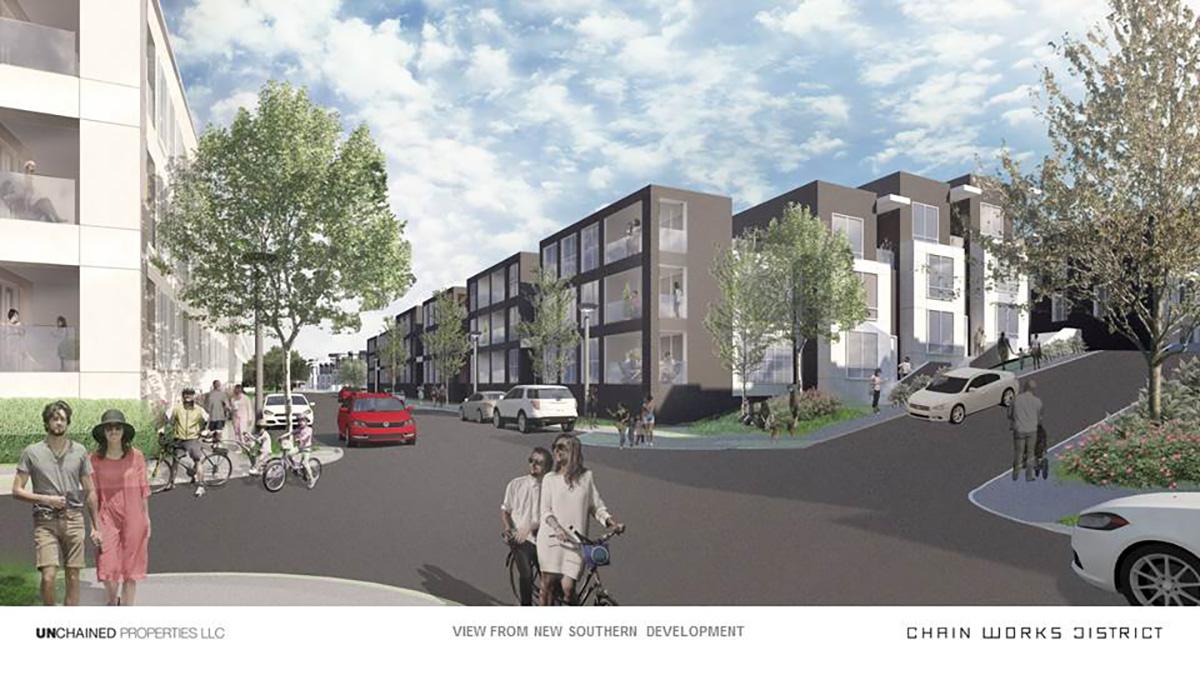 Courtesy of The Chain Works District
The development corporation Unchained Properties LLC (UP) is currently finalizing agreements with the City of Ithaca to build a complex with housing, entertainment and restaurants in the former Emerson Transmission Power Plant property near the Ithaca College campus.
By Justin Henry — Staff Writer
Published: August 29, 2016

A new development project in progress with the City of Ithaca could add housing, entertainment and restaurants to the former Emerson Transmission Power Plant property, a 95-acre plot on South Hill near the Ithaca College campus.

The development corporation Unchained Properties LLC (UP) is currently finalizing agreements with the City of Ithaca Common Council to build the multiuse development, which will be called the Chain Works District, said Lisa Nicholas, senior planner in the Department of Planning and Economic Development for the City of Ithaca. The complex — which UP is calling a “live, work, play” district — will include residential housing, commercial businesses and spaces for local businesses to rent, as well as office space and parks. After breaking ground this spring, UP estimates the project will take seven to 10 years to complete.

A purchase agreement between Emerson Transmission and UP was finalized in April 2014, followed by the city’s approval of the project in August 2014, according to UP’s website. Jamie Gensel, president of Fagan Engineers, the civil engineering firm hired by UP, said the project team is expecting approval from the city for its state-required Generic Environmental Impact Statement sometime during the fall.

David Lubin, UP managing director, said their goal is for the development to be an economic asset to the city by creating jobs and providing an incubation space for local business while maintaining transparency with the greater Ithaca community about the environmental impact of the project.

Gensel said one current plan places the district’s entrance on 96B, across from the campus. In addition to offering 185,000 square feet of new commercial space, he said, the redevelopment project will offer students at the college a new bridge between campus and The Commons. Once the project is done, Gensel said, students will be able to cross the street onto the new district and have a quarter mile of safe walking to downtown Ithaca.

Though the project is still in its planning phase, Nicholas said she believes it has potential to create internship and job opportunities for students within walking distance of campus.

The project’s proposal also reserves an estimated 1,250,000 square feet for residential housing, which Gensel said may appeal to college students. Linda Koenig, assistant director for housing services and communications in the Office of Residential Life, said UP has not communicated an interest in competing with on-campus housing opportunities.

With the district’s entrance potentially being across the street from campus, sophomore Julia Ladd said the district would be great for prospective underclassmen who don’t have a car on campus but who want easy access to local shops and restaurants.

“That’ll be a super close walk for kids who are living in the lower quads,” she said. “Maybe 10 to 15 years down the road when I come back for a reunion, there will be a hotel there, and I’m looking for a place to stay off campus.”