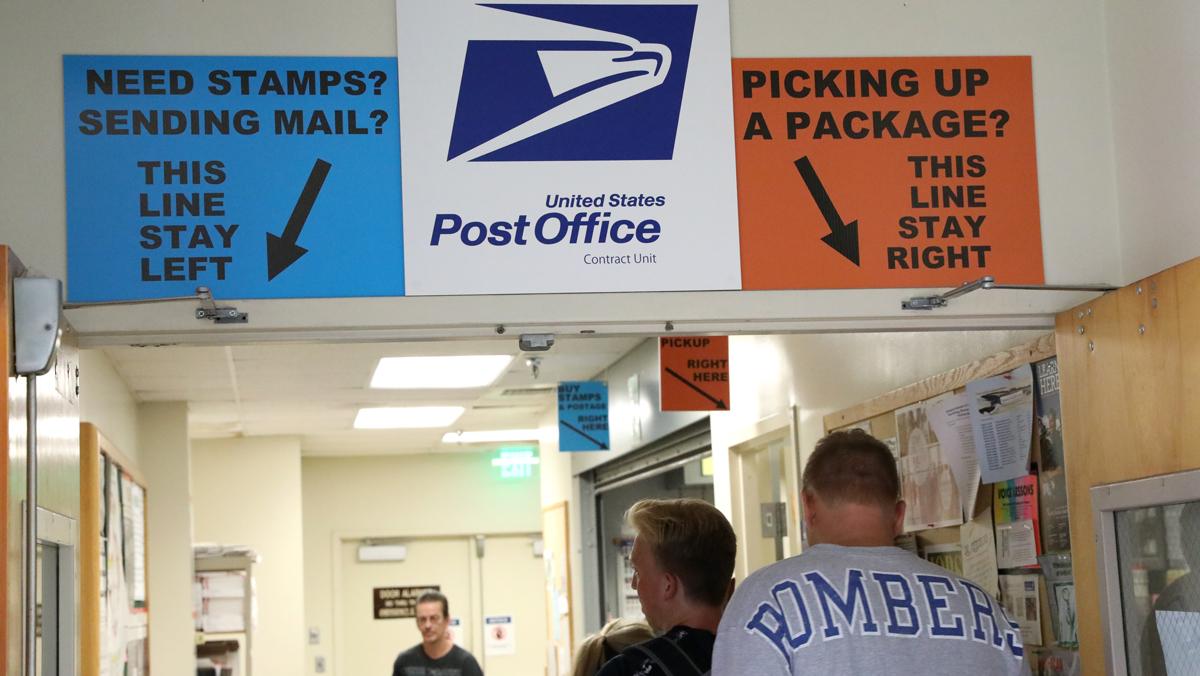 Andrew Treves/The Ithacan
Ithaca College residents line up at Phillips Hall Post Office in Campus Center to pick up their mail. Now, residents are able to get both letters and packages at the same location.
By Phoebe Harms — Staff Writer
Published: September 4, 2018

In an effort to streamline Ithaca College’s mail system, there will now only be two mailrooms on campus, Phillips Hall Post Office and Circles Mailroom, for on-campus residents to pick up both packages and letter mail.

“Sorting through boxes and moving mail between each mailroom has proven to be incredibly labor intensive,” Schlough said. “With the recent decline in letter mail and great increase in packages, it made sense to consolidate the whole operation.”

The new “Virtual Mail” system is designed to be more efficient for students. Now, instead of having to go to two different mailrooms for letters and packages, both can be received at one location, postal services assistant Cheryl Christopher said. Students will also receive email notifications every time they are sent a letter or package, Schlough said.

This decline in letters and rise in packages follows a national trend as the overall volume of mail sent through the U.S. Postal Service has declined 43 percent since 2001. This change is likely because of the increased use of email and social media as well as e-commerce and online shopping, a trend especially common in this generation of college students, according to a report from the U.S. Postal Service.

The college still receives high amounts of mail meant for former students, so it is difficult to estimate how much mail is junk, Schlough said. He said he hopes the new mailroom system will make it easier to track how many letters the college receives.

“The amount of mail sorted to students’ mailboxes has always been far below the overall totals received at the college,” Schlough said. “The new Virtual Mail statistics are expected to accurately illustrate deliverable mail since it will only constitute mail received for current students living on campus”.

Schlough said a concern about consolidating the number of mailrooms is overcrowding and long lines. Phillips Hall had issues with lack of storage in the past, which resulted in 20–25–minutelong waits and long lines. Anticipating this issue, Mail Services extended hours and will now officially be open from 8:30 a.m. to 7 p.m. on weekdays with an additional 10 a.m. to 2 p.m. on Saturdays in attempts to distribute the crowd of students into a larger window of time, Schlough said. All student employees who worked in the previous mailrooms will now have their hours reallocated to accommodate the increased hours in Phillips Hall, Schlough said.

Fifth-year student Samantha Davey, who has worked in the Phillips Hall Post Office for three years, said she and many other student mailroom staff members find the new system more accommodating for workers.

“The new system makes it much easier for us in here,” Davey said. “With the extended hours, there’s more opportunity for our staff to work.”

Another concern with the new system is the storage space in Phillips Hall or lack thereof. The Phillips Hall post office was previously unsuited for the number of packages it was receiving, which lead to overflow and longer lines. In an attempt to address this, the mailroom has been rearranged by creating an additional wall dedicated to filing all letter mail as well as additional shelving for packages, Christopher said.

She said she thinks these changes will help make the postal services at the college more organized and effective.

“The changes we’ve made are really so exciting,” Christopher said. “Now that we’re open until 7 p.m. and have increased space, everything is much more efficient.”

Sophomore Gianna Orlando said she thinks the older mailrooms were ineffective and the new system is more practical for students.

“I honestly forgot to check my mailbox since we didn’t used to be notified when letters arrived,” Orlando said. “The new system seems more efficient for both students and the mailroom.”