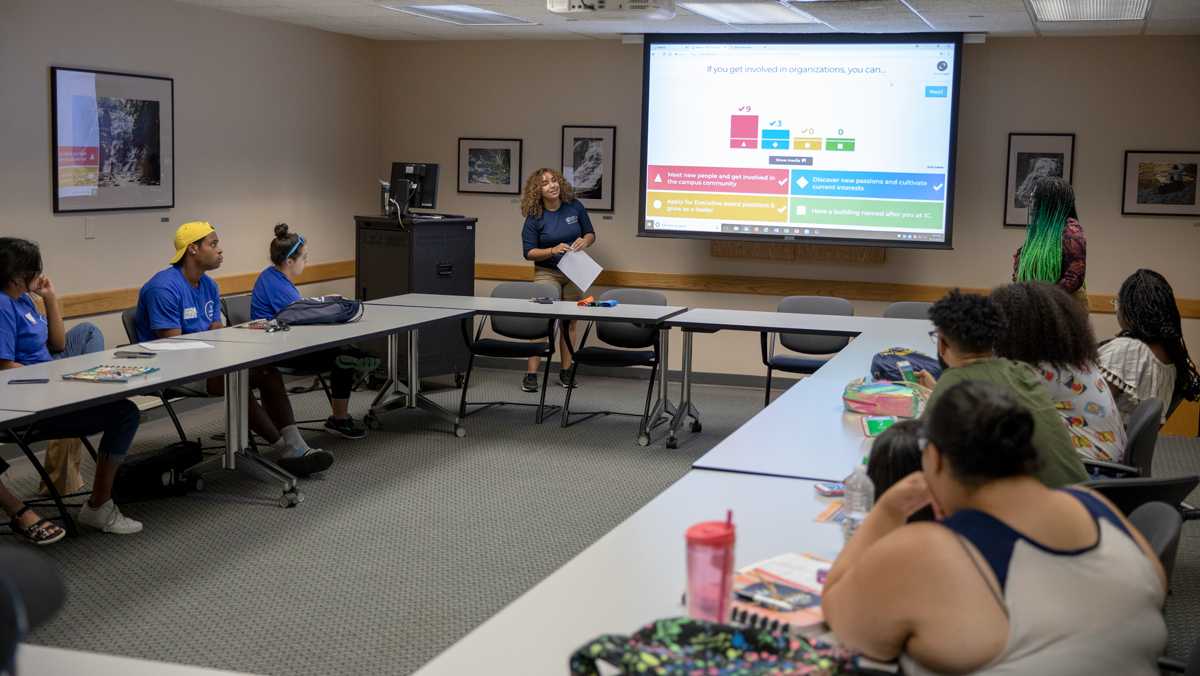 Elias Olsen/The Ithacan
First-generation freshmen students went to a program event in the Taughannock Falls room in Ithaca College Square on Aug. 25 as part of the pilot year of the First Look Program, a program to help first-generation students.
By Ashley Stalnecker — Staff Writer
Published: September 4, 2018

A small fire created with nearby timber from the Ithaca College Natural Lands warmed a small group of first-generation students Aug. 23 before classes began.

Freshman Cyerra Adams roasted her marshmallow over the fire, hoping to make the perfect s’more, while simultaneously teaching her newly made friend, freshman Leticia Guibunda — a first-generation student from Brazil — how to make one too.

This campfire, hosted by Hillel at the college, was one of many events filled with camaraderie and bonding for first-generation students who attended the first-ever First Look Program. The event, which was offered by the newly created Office of New Student and Transition Programs, aimed to help first-generation students acclimate to their new environment in college. Grace Terry, assistant director of the NSTP office, coordinated the program.

“I’m just happy if this supports them in any way,” Terry said. “College is tricky, and there’s so many offices, and it’s kind of confusing for anyone, so just letting them know that we’re here for them and we’re here to help.”

“I encourage all first-generation students to take advantage of this,” Adams said. “It’s a really great program.”

First-generation students are often put at a disadvantage when entering college. Because first–generation college students usually do not have the same historical social, cultural and financial capital as other traditional college students, it can be harder for them to acclimate and succeed in an unfamiliar environment.

“It was a lot of really not understanding the culture of college,” Lynch said.

Lynch said it is helpful for first-generation students to be informed of the specific resources available to them to ease the transition process.

“Being a first-generation student can be very isolating,” Lynch said. “First Look was really put together to show them that they do have a lot of resources on campus and a lot of resources that are willing and rooting for them to succeed here as a college student.”

The New Student and Transition Office will also be introducing a newsletter produced for first-generation students. The newsletter, titled “Six Weeks,” will run on a weekly basis for the first six weeks of classes. Terry said the office wants to do this because the first six weeks of a college student’s experience is found to have a major impact on how students will adjust to and thrive in college.

The New Student and Transition Office will take on a staff of students, and part of their jobs will be writing this newsletter, Terry said. The newsletter aims to highlight different narratives from first-generation students while integrating topics including helpful clubs and resources on campus. Terry said the office will accept entries from faculty, staff and students willing to share their experiences as first-generation students. The newsletter will be written in a blog format and shared via email.

The idea for the First Look Program came from an initiative by Erica Shockley, the former director of the First Year Experience at Ithaca College, who studied other colleges that implement similar programs.

“We’re letting them know that they’re not alone,” Terry said. “No student here is alone.”

“They all came in together, and they all will continue to move through Ithaca at kind of the same rate,” Terry said. “They built that sense of community, and that’s really important.”

On Saturday, Aug. 25, the students competed in a mock version of “The Amazing Race.” This event was an Instagram scavenger hunt with open-ended questions like “Where is the best place to study?” The students would then search campus to take pictures of spots they thought would be best to study.

Students also had the opportunity to talk with peer mentors, faculty and staff. Freshman Felix Santos said the program made him realize he was not alone.

“We gathered together, and we just talked,” Santos said. “They were real with us. That’s really important for me — I want someone to be genuine.”

First-generation freshman Paige Ramkissoon said she most enjoyed taking an in-depth tour of the campus to learn different routes and shortcuts to classes.

“It made me more comfortable,” Ramkissoon said. “I went to classes today, and I wasn’t wandering around, trying to figure out where to go. I knew where I was going, and I knew what I needed because the upperclassmen told us what to expect.”

Terry said she would like to expand the program and resources available during the program next year.

Ramkissoon said it would be beneficial to have more programming for the parents who will be leaving their children in a place unfamiliar to them.

Adams, Ramkissoon and Santos all said they would recommend the program to future students because they went into the academic year with friends and a support system, which is comforting to them.

“It’s a great way to meet people,” Ramkissoon said. “I already have new friends. It’s hard to find people who think like you, and all the people who were there have similar experiences and know what you went through and are going through it themselves.”