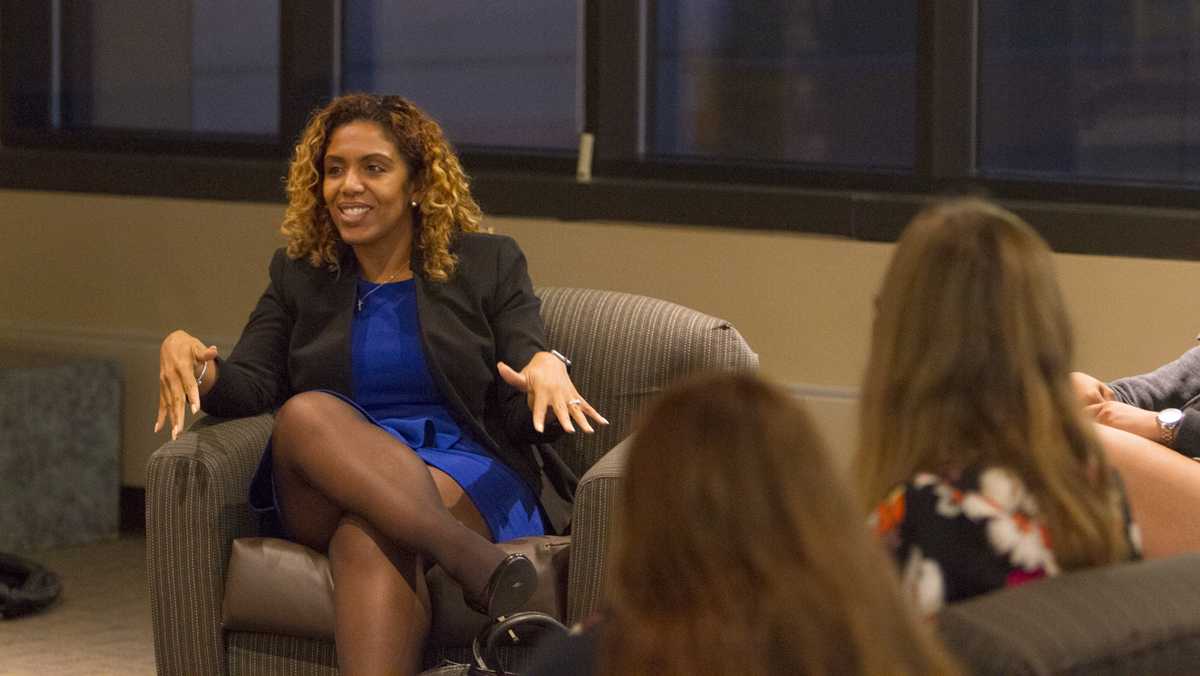 Ithaca College President Shirley M. Collado announced the reinstatement of the Division of Student Affairs and Campus Life and appointment of Ferro as vice president Sept. 21. Collado appointed Ferro without a formal search.

The discussion sessions offered the opportunity for those in attendance to ask Ferro questions about her position. Ferro began the sessions with a brief introduction and overview of her past collegiate employment and devoted the remainder of the hour to answering attendees’ questions.

Ferro met with 10 students at 6 p.m. and rearranged the setup of the room to make a circle so the conversation could be more intimate.

She said she wants to work with her staff to create a comprehensive division and develop a consistent message for students. Ferro said her leadership style is to get work done efficiently, and that that is also a leadership trait of Collado’s she said she admires.

“What I’m hoping to bring is more visibility, and also being part of a larger conversation, being part of the presidential cabinet and putting student affairs at a different level,” she said.

Ferro talked about how she is coming from Williams College — which has a total student population of 2,099 — and that she wants Ithaca College to feel small to students. Ithaca College currently has 6,516 students enrolled this semester, according to Institutional Research. She said that some of the students she talked to at the college said they feel lost and are not engaged in the community.

“It’s not on the student to change to fit the place, and that is something I want to bring here,” Ferro said. “How do we change as an institution to accommodate the needs of the students? It’s not always easy, especially if it means more work for people, if it means making people uncomfortable sometimes because they need to check their own privilege and power.”

Students at the discussion told Ferro that they feel there is a disconnect between students in the different schools. Some expressed that enough students do not attend campus events and that OrgSync is a confusing interface that is not utilized enough by students.

Ferro proposed bringing together student leaders on campus, such as club presidents, to encourage collaboration.

Sophomore Aisha Mughal said she came to the event because she is excited there is another woman of color in a leadership position at the college and that she wanted to personally meet Ferro.

Senior Chelsea Holiday said she most liked Ferro’s idea of having student focus–groups so she can better understand students’ needs.

“They are actually testing [ideas] to know some people are actually on board for this, and not just throwing it out there and having people adjust,” Holiday said. “I’m excited to see what she comes up with.”

During the open session with faculty members at 3 p.m., John Rosenthal, professor in the Department of Mathematics, asked Ferro if she was concerned about the lack of a search committee for her position, and how she plans to deal with any adversity stemming from its absence.

Ferro said she recognized this aspect of the appointment as a legitimate concern, and that it would serve as a source of motivation.

“It’s also not going to challenge me in a way that I’m not going to be able to do work in the way that I want to,” Ferro said. “I think it’s pushing me to do what I already do well. … So, it’s a good concern … it’s almost like a challenge to myself.”

Ferro said that she will combat any concerns about her sudden appointment by continuing to be transparent and communicate with the college’s stakeholders about her role and Collado’s decision. She added that it is not uncommon for institutions to appoint positions without a formal search.

Paul A. Hesler ’87, director of principal gifts, asked Ferro what she will bring to her new position, especially when reflecting on her past experiences in her career.

Ferro said that her involvement with residential life and involvement on campus during her time as a first-generation, low-income undergraduate student provided the foundation for her ability to hold the position. Ferro also said this personal connection to student affairs and campus life significantly contribute to her vision for the division.

“You have to really care about the work,” Ferro said. “For me, I think it’s being able to bring the personal into the professional and vice versa, and being able to be in spaces where the students can feel that I’m being authentic.”

Nia Nunn, assistant professor in the Department of Education, asked Ferro what faculty members could do to assist her in her transition into the role. Ferro said that in addition to communication between her division and related departments, it would be helpful for faculty to be mindful that she is new to the college.

In addition to the sessions, Ferro also met with a variety of staff members and student organization leaders Oct. 2. Ferro said she felt that these meetings went very well, and that she has had the ability to meet a wide range of the college population.

“Folks are asking me really good questions, and it’s met my expectations,” Ferro said. “I think it’s been really nice to see how many different groups of people have come. And so, between yesterday and today, I’ve met a lot of people.”