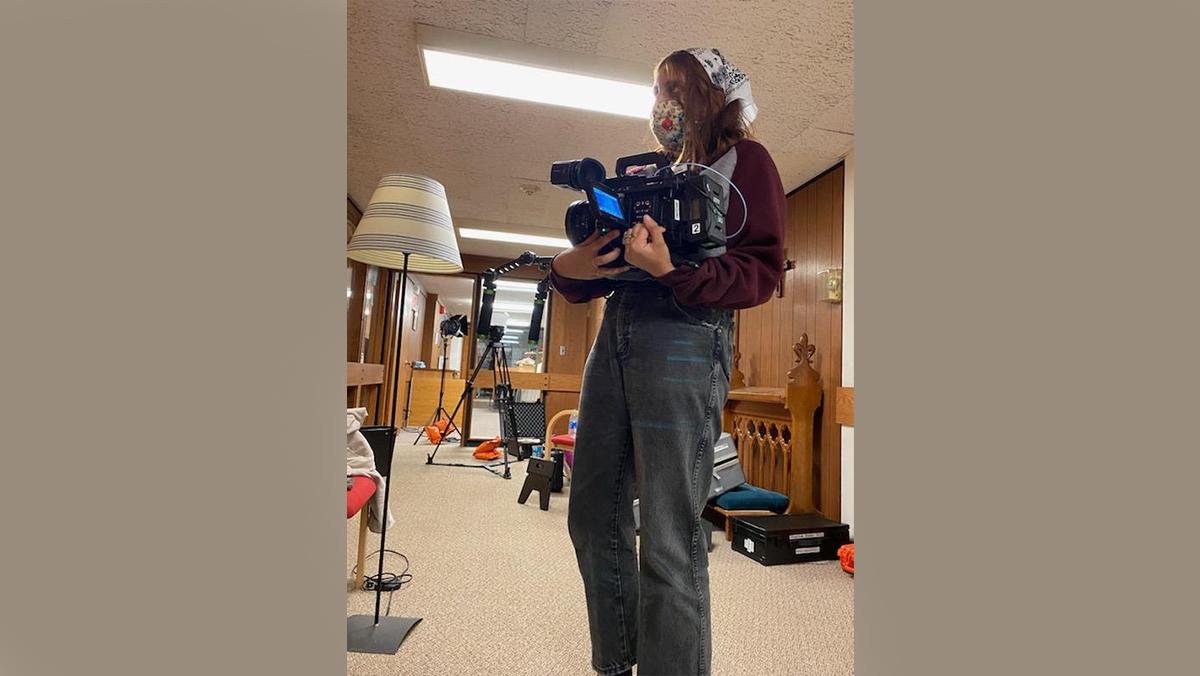 During Spring 2022, senior Surina Belk-Gupta, a cinema and photography major at Ithaca College, created a Google survey to connect non-male filmmakers at the college. After receiving positive responses, she dedicated a webpage to the cause in March.

According to the webpage — Connecting non-male IC filmmakers to sets — out of the roughly 5,000 undergraduate students enrolled at the college, over 58% of the student body is non-male. Yet, students like Belk-Gupta observe that the majority of people on sets are male-identifying. Belk-Gupta said that during her time at the college, the lack of non-male students on film sets is a common conversation among her peers.

“We’re always complaining about it on Twitter, or to each other, but nothing was really happening,” Belk-Gupta said. “I also know a lot of people that considered transferring or were having so many issues in Park [School of Communications] because they felt so uncomfortable and unwelcomed on sets because of how male-centric they were. … I was just really sick of it.”

Senior Meabh Cadigan said she was a film, photo and visual arts major before switching to a double major in english and writing for film, tv, and emerging media.

“I was just kind of like, ‘Well, I feel like I need to shift gears here because I just don’t feel like I have the resources to work how I want to,’”Cadigan said. “Now there’s a sort of centralized resource for that sort of [community] and … people are reaching out to me.”

“I was like, ‘Oh, my goodness, thank you,’ because there have been so many times where I was on a set … [and] it was just so heavily masculine,” Chin said. “I noticed that a lot of the women or nonbinary people on sets would do more managerial roles.”

A BBC article from 2018 found that women held less than one in five key crew roles. The research was conducted between winners of “best feature films” at 10 major film festivals and awards, like the Oscars, from 1990 to 2018. The Celluloid Ceiling also found that in 2019, women accounted for 40% of music supervisors and 23% of production designers out of the top 250 films of the year.

Chin said she used Belk-Gupta’s site for one of the thesis films she is producing this fall and said the initiative is not only beneficial to the college’s students, but to the future of the film industry.

“It’s really important because as we push for more diversity, and showing that it matters on the college level, really helps to show employers like, ‘hey, we care about these viewpoints, these backgrounds, we care to focus on these points of view and these stories and these perspectives,’” Chin said.

Junior Julia Stitely said they were a producer for an ICTV show, Fathoms Below, where the entire production team was made up of non-male identifying students.

Stitely said that soon after signing up for the forum they received an offer.

“Someone did reach out to me, like, I would say maybe two weeks after it happened, and I sadly couldn’t do it,” Stitely said. “But I was really, really excited.”

Amy Falkner, dean of the Park School of Communications, said gender equity issues on film sets, within college campuses or in the professional world, is not a new issue.

“Every institution has talked about it, but it’s in the doing,” Falkner said. “This is just a little microcosm of that very big issue. How do you shine light on it? And then how do you follow through on it? … So I’m glad that she [Belk-Gupta] did this to get the ball rolling.”

Belk-Gupta said she hopes her initiative creates a different climate on campus film sets and that in following semesters people work toward inclusivity.

“I’m so pleasantly surprised I have so many people that have used this,” Belk-Gupta said. “Many people have found a majority of their thesis crew through this. … I hope that not only this website gets used, but after I graduate, people continue to work on this.”