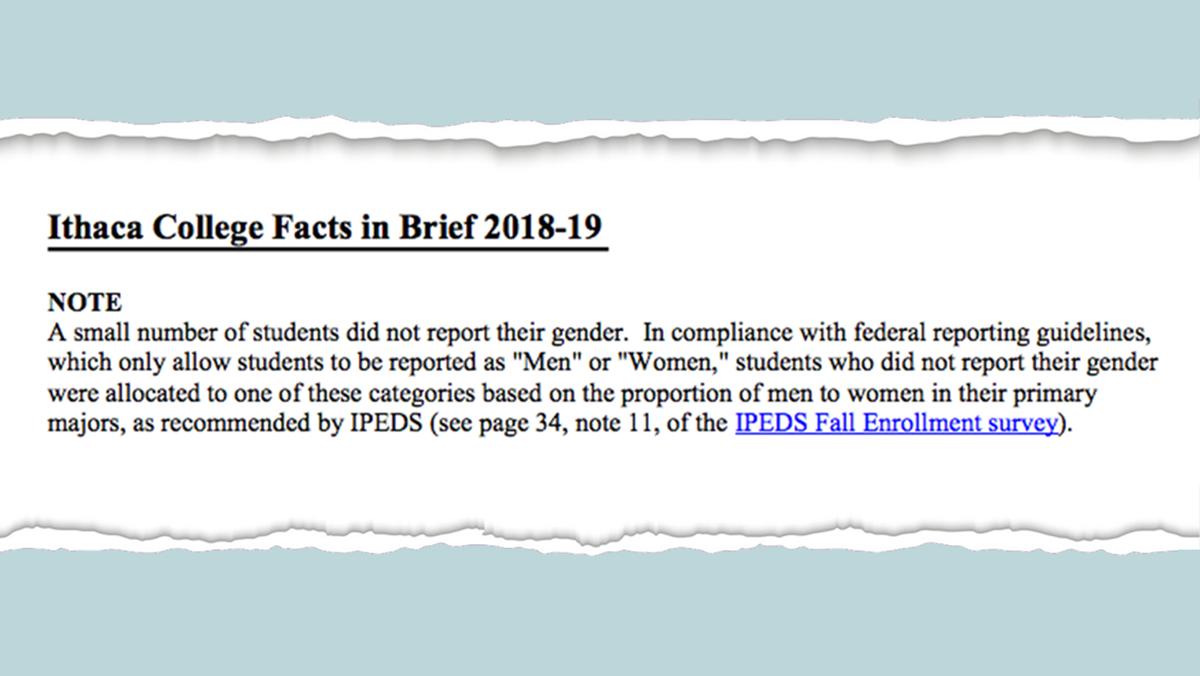 Maya Rodgers/The Ithacan
The Facts in Brief for 2017–18 was the first with a disclaimer indicating that there were students who did not report a binary gender who were not represented in the released data.
By Mary Rand — Staff Writer
Published: October 10, 2018

At Ithaca College, there is an annual collection of analytical information about all students, which is organized into a document called Facts in Brief. However, nonbinary students are not included in the gender–breakdown data, causing some to be concerned that their identities are being erased.

The data is collected from students through their Common Application, which is the form that most students use to apply to the college. The application, has a nonbinary gender option, but the college cannot report the number of nonbinary students it has publicly because of government funding regulations.

The college must report all of its data to the Integrated Postsecondary Education Data System (IPEDS), run by the National Center for Education Statistics. In order to receive federal funding for financial aid programs, all data reported to IPEDS must comply with the gender options of the IPEDS system, which only provides input for the binary options of male and female.

The Facts in Brief for 2017–18 was the first with a disclaimer indicating that there were students who did not report a binary gender who were not represented in the released data. This was part of an effort to improve transparency, Gerard Turbide, vice president of enrollment management at the college, said. The same disclaimer appeared on the data released for the 2018–19 academic year Oct. 1.

The gender binary — male and female categories — excludes other gender identities including nonbinary, genderfluid, genderqueer and others. Enforcing a gender binary raises a concern about the visibility and erasure of nonbinary students, Luca Maurer, director of the LGBT Center for Education, Outreach and Services, said.

“Any time we don’t see ourselves reflected in data, that’s a gap, and it can serve to alienate individual members of our campus community and erase our existence,” Maurer said.

Shane Windmeyer, executive director of Campus Pride — a national organization that advocates for LGBTQ representation on college campuses — said having statistical representation of LGBTQ students on campus is important to hold colleges accountable.

“Once they know that population exists, they can’t ignore it,” Windmeyer said.

How the college collects gender data

The college sources student demographic data, ranging from race, ethnicity and gender to state of residence, from the Common Application, where it is then stored through Banner, an educational software system. From there, the stored data is reported to IPEDS. The information given to IPEDS is then used for the Facts and Brief.

Previously, Banner only allowed for male, female or unknown gender options, forcing the college to consolidate the varied nonbinary options into the single unknown option that the Facts in Brief omits in its data.

Banner has been updated to its ninth version, which the college will have implemented by 2019, Turbide said. The new system will allow for the storage of student-preferred pronoun and gender data that can be reported publicly, Information Systems Specialist Alexander Peroulakis said. The options include a general nonbinary gender identity, use of they/them pronouns or an indication to ask an individual’s pronouns, Peroulakis said.

IPEDS allows an institution to decide its own method to accommodate nonbinary students, according to the fall enrollment reporting guidelines released by IPEDS.

If it does not, then an institution cannot complete its report and will not receive financial aid funding.

Because there is such a small number of nonbinary students on campus, Turbide said the college did not want to release the data to protect nonbinary students identities in case others students try to determine their identity for malicious reasons.

However, in the Facts in Brief released for 2018–19, small counts of students under the Racial/Ethnic Classification were not omitted, including one American Indian or Alaska Native and one Native Hawaiian or Other Pacific Islander in the freshmen class.

It is difficult to determine if the number of nonbinary students at the college is growing or shrinking because the nonbinary gender data only started being collected in 2016, the counts for which, according to Turbide, are very small.

IPEDS receives reports from over 4,000 degree-granting institutions. IPEDS-reporting peer institutions of the college, such as Amherst University and Elon University, with similar fact books to the Facts in Brief, do not draw attention to the issue of reporting nonbinary student counts with a disclaimer similar to the one in Ithaca College’s Facts in Brief.

Maurer said he thinks the college is in a difficult situation and that the staff in the Office of Analytics and Research has put in effort to be transparent.

“I think they really struggled with, ‘Wait, we’re being forced to report in a way that’s not true, what do we do?’” Maurer said.

The Office of Analytics and Institutional Research directed all questions and comments to Turbide for this story.

Nonbinary student experiences at the college

Some students identifying as nonbinary said they do not see how their lack of representation in the college’s demographic statistics affects their day to day lives, but they have had other troubling experiences at the college when it comes to their identities. Many nonbinary students have said they also experience frequent incorrect pronoun usage.

On the phone, she was repeatedly met with confusion and apprehension from Residential Life, put on hold and transferred to other departments to fulfill her request. Cassano said the confusion may have been caused by how she identified herself.

By her fifth call, Cassano said she was so frustrated that she instead misidentified herself as transgender to get proper housing accommodations, by using inaccurate language she thought the office would understand. Her request was fulfilled.

“[It was] dishonest, but I wouldn’t have been able to get the accommodations I needed,” she said.

Junior Varun Koppikar said they do not see being represented in the Facts in Brief as a pressing issue. Koppikar said the biggest issue they have at the college is being misgendered by professors.

Koppikar, who was at the time wearing three they/them pronoun pins, pointed them out to the professor, who paused and asked the class what it thought of “his” work.

Koppikar said they did not have the energy to dispute the professor further.

“I don’t want to be that person who throws a hissy fit about my gender and then become a walking stereotype,” Koppikar said.

Sophomore Katie Conte, who uses they/them pronouns, said they are sometimes not referred to by their preferred pronouns by members of the women’s swim team. Conte said they are the only nonbinary student on the team that they are aware of.

“It’s very difficult to not identify as a woman and be on the team, and I think the team realizes that, and that’s more than I could ever ask for,” Conte said.

Nationally, recent reports from the University of Minnesota and the University of California Los Angeles found that increasing numbers of youth in the surveyed areas are identifying as transgender, gender nonconforming or genderqueer.

Of the youth ages 12 to 17 in the California study, 6.2 percent were found to be “Highly Gender Nonconforming” through rating their self-expression as very different from their identified birth sex. The studies suggest a greater proportion of college students enrolled in the future would, by the current federal guidelines, be misrepresented at a greater scale.

Joel Baum, senior director of Gender Spectrum — a California-based organization that advocates for inclusive education about gender in presecondary schools — said it is concerning that colleges are not statistically representing nonbinary students because of the emphasis placed on statistics in our society. Baum said this results in a cycle in which students cannot be accommodated because they are not counted or recognized.

“We have a society that operates around the importance of data,” Baum said. “When you count things, they matter.”

The college is working to change the forced misrepresentation in the reported student data. The Data Governance Committee, made up of students, faculty and staff from the college, will be meeting in the near future to decide an inclusive approach to the issue, Turbide said. The committee includes Maurer and is chaired by Chief Analytics Officer Yuko Mulugetta, according to the Analytics and Institutional Research website.

Turbide said nonbinary representation is not ignored by the college, despite the limitations of the federal reporting systems.

“The desire is to accurately represent the reality that students don’t all fit into binary gender or identify that way,” Turbide said.

Maurer said raising awareness of this issue of representation goes beyond the college’s responsibilities alone, and widespread action at the state and federal level is necessary to improve nonbinary representation in the long term.

“One of my suggestions for action would be everyone on our campus and off our campus who works in analytics and data collection to find out what avenues they have to be able to say, ‘We see that you’re requiring us to report in this way, we’re concerned because it’s not reflective of our student body,” Maurer said.

Windmeyer said the college’s efforts so far are years ahead of many campuses, but he said more can still be done to accommodate nonbinary students’ needs.

“There needs to be greater exposure on different levels before people start understanding,” Windmeyer said.

Maurer urged everyone concerned about representation to advocate for it, not just at the college, but toward the federal systems mandating the reporting. The actions needed to invoke change are clear, he said, including spreading awareness to elected officials and voting, as well as potentially filing with the Office of Civil Rights in New York.

“Just because something’s been done a certain way forever doesn’t mean it’s accurate, or reflective, or the truth,” Maurer said.