Observatory under repair in hopes of viewing night in fall 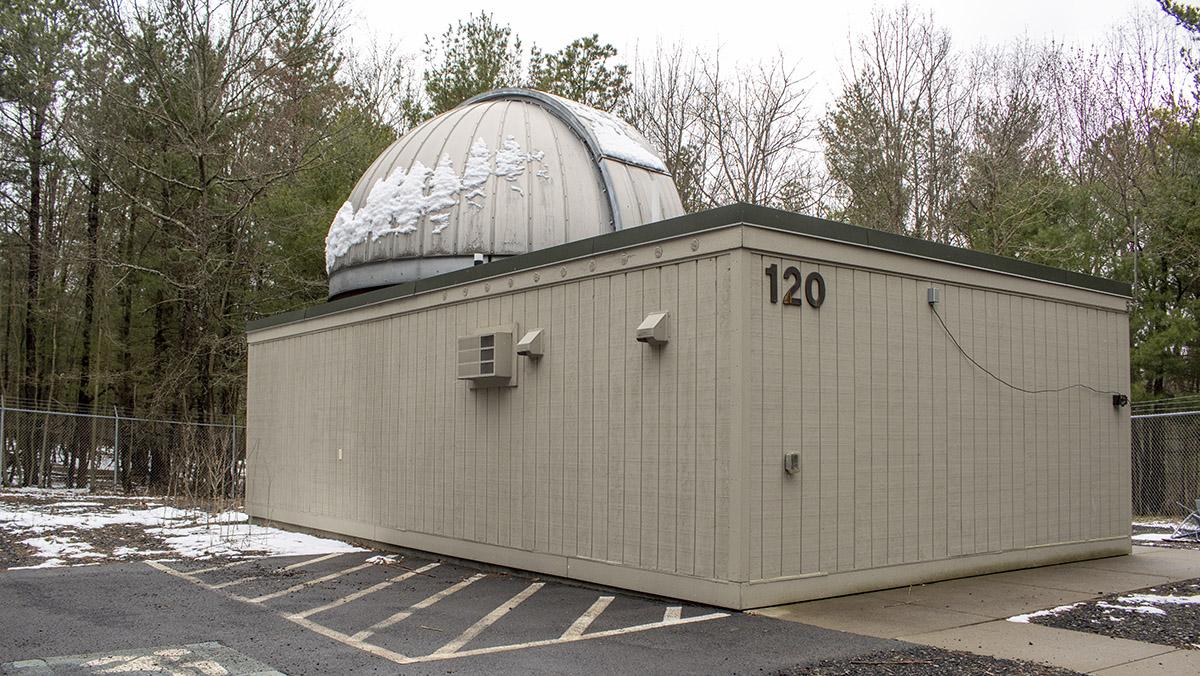 Alyssa Beebe/The Ithacan
In 1998, the college built the Clinton B. Ford Observatory with funding from Clinton B. Ford — former trustee of the college — the National Science Foundation and Ithaca College. The observatory is primarily used by the Department of Physics and Astronomy for astronomy classes and research projects for physics majors.
By Jadyn Davis — Staff Writer
Published: April 20, 2022

With Ithaca College’s Clinton B. Ford Observatory telescope out of commission, faculty and students from the Department of Physics and Astronomy are working around the clock to make sure the telescope is ready for use by Fall 2022.

Back in 2018, the observatory experienced damage to its electronic system, as a result of an ongoing issue with rodents. During the winter months, mice would sneak into the observatory and chew on the wires connected to the telescope, causing the system to malfunction. The Office of Facilities helped clear the mice out of the observatory by closing off any potential entrances for mice to get into. However, Matt Price, associate professor in the Department of Physics and Astronomy, said even with all the necessary cautions, the mice still find a way to get in.

In 1998, the college built the Clinton B. Ford Observatory with funding from Clinton B. Ford — former trustee of the college — the National Science Foundation and Ithaca College. The observatory is primarily used by the Department of Physics and Astronomy for astronomy classes and research projects for physics majors.

The main telescope in the observatory is controlled by a computer in the warm room to achieve a blind pointing accuracy better than one arc-minute. This allows individuals to see images of celestial objects.

The Astronomy Club at the college started in 2019 and at the time hoped to utilize the observatory and educate members and the Ithaca community about the galaxy. However, the club has been inactive because of repairs to the telescope. Senior George Cozma — a physics major — was a member of the club, but said he was focusing on putting together the telescope. While the club is separate from the department, the Astronomy Club works alongside the department by doing research and planning events for the student body at the college.

Cozma has been working with the observatory since his freshman year and is currently charged with setting up the cameras that allow the telescope to capture images from space. Cozma said even though he wants to get the observatory up and running, he is aware of the challenges that lie ahead.

“My initial reaction was, ‘I want to get this fixed as fast as we can,’” Cozma said. “However, once the actual damage was revealed, I knew that it was going to be quite a long process. So it’s just sort of been now that we have all the pieces we can finally start moving in the direction of bringing everything back online.”

Cozma said he hopes everything is set up before he graduates in Fall 2022.

“By then everything will hopefully be online,” Cozma said. “I won’t be gone before it’s all brought online, but if I am, if I do leave before then I would come back and just make and just see it all working.”

Price said he wants to not only bring back the club but to give more responsibility to the members of the club by allowing them to look after the observatory.

“The goal is to build a community of astronomy-observing clubs,” Price said. “I can’t go out all the time and do this … teaching other students either in physics and astronomy that want to join the club, how to use the telescope and being safe about it. So, two or three people up at a time doing some observations is one way.”

Luke Keller, professor in the Department of Physics and Astronomy, said the department decided to replace the old telescope with a more updated model, which includes a faster software, a modified pillar for the telescope and a USB cable connected to a laptop — as opposed to several wires. Keller said the replacement was necessary because the old telescope was damaged beyond repair.

“We decided at that point that this telescope was pretty old, and the computer and electronics were really out of date,” Keller said. “It ended up being economically more sensible to actually replace the telescope, it would have been more expensive to fix it than to replace it.”

“We’re hoping that the images through it will become more clear,” Keller said. “It’s not any bigger and it’s about the same size. So that’s actually good because the building and everything was built for the size of a telescope and it works really well.”

“We have the whole summer to get everything working and get it running really well,” Keller said. “We’re gonna have an observing night and invite everybody from campus. And then celebrate the new facility.”