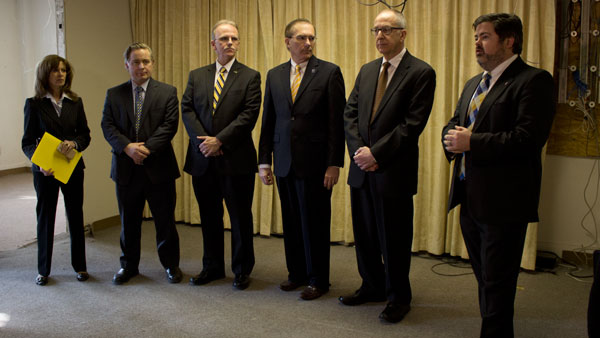 Officials announced the development of the 9,000-square-foot Downtown Ithaca Incubator at a press conference Jan 16. Local government officials as well as representatives from Ithaca College, Cornell University and Tompkins Cortland Community College were in attendance at the event.

The Downtown Ithaca Incubator will be a shared space, located in the Carey Building at 314 East State St., about three blocks from the Boardman House in DeWitt Park, where Ithaca College was originally founded.  The newly designed area will be a hub for rising entrepreneurs throughout the area to collaborate on projects. This two-floor space will encourage the flow of ideas for start-up businesses within the Ithaca area.

Through the Empire State Development Corporation, the city will receive $1 million to renovate and build the current layout of the space in the Carey Building to be more open and updated, Mary Opperman, vice president for human resources and safety services at Cornell University, said.

“To assist new companies in early stages of development and to encourage them to stay here in our community as they grow and expand, the Incubator will serve as a focal point for growing startup ecosystems in Tompkins County,” Opperman said.

Ithaca College President Tom Rochon said this project is a natural complement to the growing undergraduate programs in entrepreneurship.

“This is going to be an enormous benefit to our students, who will get to see the entrepreneurial spirit in action, who will lend their own advice and their own support and work,” Rochon said.

Rochon emphasized the community connection the college has always had with the city and said that connection will continue through the Downtown Ithaca Incubator project as more students will be working downtown.

Tom Schryver, executive director of new venture advancement at Cornell, and Downtown Ithaca Incubator planning team member, said Tompkins County has received $57 million between 2008 and 2012. The money was received through the Small Business Innovation Research Grant, a federal grant given to startup businesses to commercialize ideas coming from universities. This amount, he said, is more than half as much as that received in New York City during the same time period.

Schryver said there are five elements that make up a good entrepreneurial model: coaching and mentoring; a network of potential employees, service providers and partners; a community of entrepreneurs; access to capital and access to a workspace.

As a great college town, Rochon said, Ithaca should be more than great restaurants and beauty. It should be about partnerships within the community too.