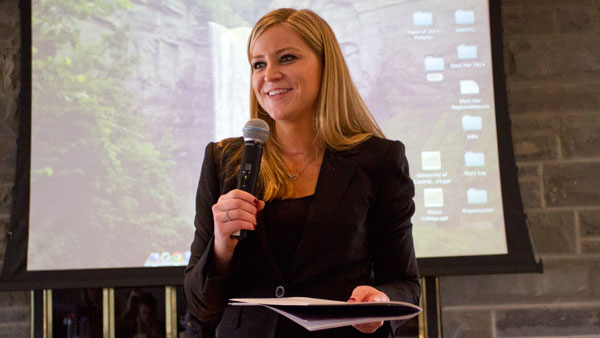 The series, run out of the Office of Student Engagement and Multicultural Affairs, began Feb. 22 with the Elect Her workshop “Ithaca Women Win,” and it will conclude March 22 with a trip to Seneca Falls, N.Y., where the women’s rights movement has its roots.

Last year, the college was one of 10 institutions in the country to receive a grant from the American Association of University Women to fund a series of workshops about the gender pay gap, Michele Lenhart, director of student leadership and involvement, said.

While there was no grant money for a workshop series this year, Lenhart said, OSEMA budgeted for the second annual Elect Her and 12th annual Women in Leadership Experience. The workshops in between these two events will feature college faculty and require no charge for participants, she said.

Senior Courtney Brown first brought the Elect Her: Campus Women Win workshop to the college last year. Brown, who is now the Elect Her student liaison for the college, worked with the national organizers to plan this year’s professional development program.

At the workshop, Melissa Richmond, an Elect Her facilitator from Washington, D.C., directed most of the interactive learning exercises, supplemented by a message from guest speaker Leslyn McBean-Clairborne, Tompkins County legislator. Brown also coordinated a panel made up of representatives from the Student Government Association.

“I think that this year we had some amazing speakers that really engaged the participants,” Brown said. “We also had many people interested in working to continue the program.”

The first mini-session of the Women Leader Series, which was held Feb. 24, began with a talk called “Can I be a Feminist at Work?” Residence directors Maggie Wetter and Katie Hellmann discussed microaggressions that target women in the workplace and how to respond in a productive way. This was also a main idea presented by Caryanne Keenan, assistant director for career development, the next day in “Women and Work: Taking Charge of Your Career Success.”

“The context is so crucial,” Hellmann said. “You could be responding to a peer or a supervisor. It’s always important to remain calm and open.”

Sophomore Heather Crespin, who attended Keenan’s event, said one of the key issues that resonated with her was the need for women to have confidence in knowing what their qualifications are and what pay they deserve.

“It’s interesting how women are socialized to not be confident, to not go for it, and if we want to change things, it needs to start on a personal level,” she said.

Lenhart presented a workshop Feb. 26 called “I Hate Networking,” which offered alternative perspectives to the typical images of traditional networking.

“What makes you memorable is sharing your story and listening to someone else’s story,” she said.

The emphasis on meaningful human connections will be further expounded upon in area coordinator Tiffani Ziemann’s talk, “Social Excellence: We Dare You, Women,” which will take place 5:30–6:30 p.m. March 4 in the Taughannock Falls Room in the Campus Center.

Ziemann said she first encountered the philosophy of “social excellence” at a conference sponsored in part by Phired Up, a company focused on personal and group development in social settings. The philosophy, she said, encourages people to be intentional about their interactions with others and see their own strengths and weaknesses.

“One thing I have really pushed myself to do is admit when I make mistakes and I don’t know the answer to something,” she said. “I have noticed that once I started making a conscious effort to do that with my staff members, they were more likely to have open and frank conversations with me about their own struggles and concerns.”

The next day, students will dissect the key differences in communication styles between men and women in a talk given by Lenhart called “You Just Don’t Understand” from 4–5 p.m. in the Taughannock Falls Room. Lenhart said she hopes men show up to this event in particular.

Last year, college faculty gave Teach, Initiate, Advocate! Talks, which are presentations inspired by TED Talks about the gender pay gap. Lenhart said students will have the opportunity to watch and discuss video clips from three of the 2013 TIA Talks on March 19 in the Taughannock Falls Room.

The 12th annual Women in Leadership Experience held March 22 in Seneca Falls is themed Women in the Media and will conclude the series. Organized by three Student Leadership Consultants who are communications majors, the day will be spent visiting the Women’s Rights National Historic Park and Museum and having open discussions about personal experiences relevant to gender issues.

Lenhart said registration for this year’s conference filled up in eight days. She said she hopes to continue the series into the future.

“We’ve had such a great response to this that I think that it is an easy thing to make it a tradition,” she said.