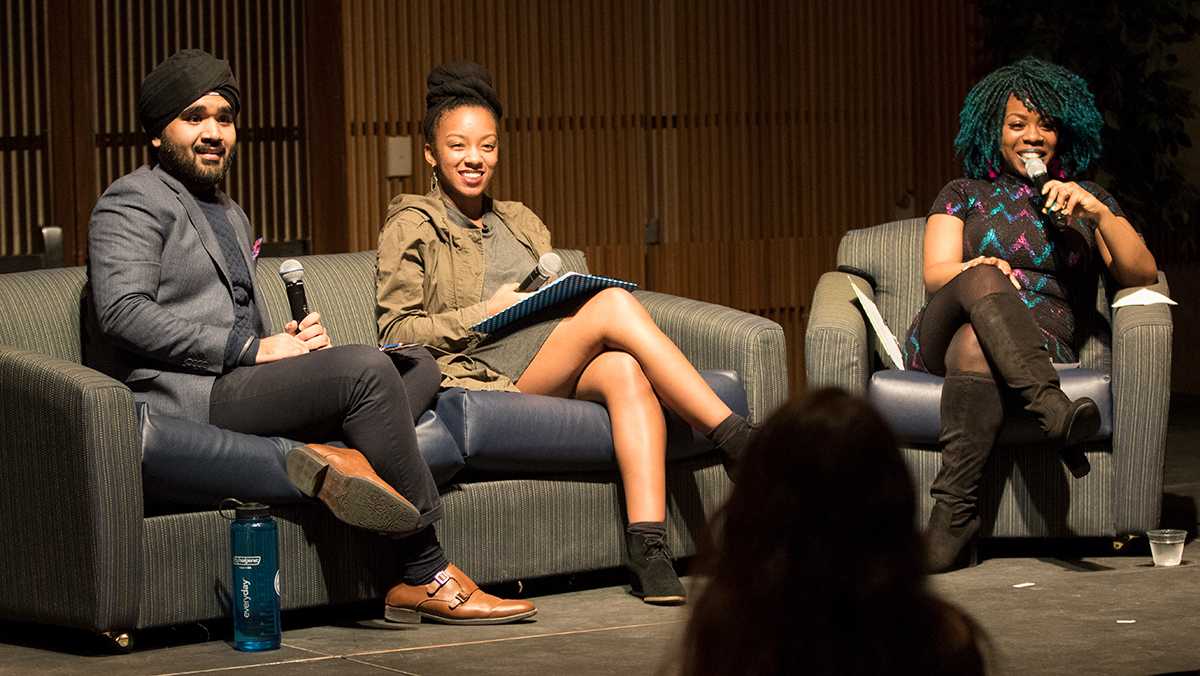 Activist Jewel Cadet was immediately drawn to the Women’s March on Washington after finding the event on Facebook. But the potential lack of diversity at the march worried her.

She decided to organize a bus for people of color and people of the lesbian, gay, bisexual, transgender, queer community to attend the Women’s March in Washington, D.C., and ensure it was inclusive.

“An activist is a person who sees what is wrong in the world and actively does something to fight it,” Cadet told an audience gathered in Feb. 23 in the Emerson Suites. “It’s something you do continually, 24/7.”

The Office of Student Engagement and Multicultural Affairs hosted Cadet — New York City chapter co-chair of Black Youth Project 100 and program manager of youth and community empowerment for the Center for Anti-Violence Education — to discuss the roles intersectionality and privilege play in the realm of activism. Cadet’s bus successfully transported 55 people, including homeless people, people of color and people of the LGBTQ community, to the Women’s March for free.

RahK Lash, assistant director for multicultural affairs, said he invited Cadet on behalf of OSEMA because he was intrigued by her activism, which he saw on Facebook, during the Women’s March in D.C. It was a question– and discussion–based event led by Lash with senior Taranjit Bhatti and junior Anissa Ash, who asked Cadet questions, along with the audience.

Cadet said her experience as a queer African-American woman whose parents emigrated from Haiti and as a sexual abuse and assault survivor greatly impacted who she is and why she participates in political activism. She said attending an all-female and mainly white college, Bay Path College — now Bay Path University — made her question if she belonged in that community and helped her shape the definition of what she thinks activism is and should be.

“How can I be black in this institution that wasn’t really made for me?” Cadet said.

Cadet said she noticed a lack of inclusivity of the transgender community because of cisgender-oriented language and rhetoric used at the Women’s March. There is no definitive number of the transgender population in the United States, but it is currently approximated that 1.4 million adults are transgender, according to a study conducted by the Williams Institute at University of California, Los Angeles. The study does not provide a definition of the term transgender, but the Gay & Lesbian Alliance Against Defamation defines transgender as “an umbrella term for people whose gender identity and/or gender expression differs from what is typically associated with the sex they were assigned at birth.”

Some students who attended the event said there was also a lack of racial intersectionality at the Women’s March in Ithaca on Jan. 21.

Junior Shelby Buche said she felt empowered by the Ithaca march because of the message it sent about demanding rights for all women but that she was very conscious of the fact that it was attended by predominantly white women. This made her uneasy, she said, because of her connection to the LGBTQ community, which is racially diverse.

Another topic of discussion was how to be an ally in an activist environment. The purpose of being an ally, Cadet said, is to stand by, but not speak for or over, those who are struggling. She said an activist, in addition, should fight for issues that do not pertain directly to them.

“We can’t come together in solidarity until you recognize your privilege,” Cadet said. “Don’t speak for my experience.”

Bhatti said he is worried that his activism often leaves him feeling discontent because just talking about inequalities and injustices is not always enough.

“What am I doing?” Bhatti said. “Am I just talking about gender equality and sexual equality? Or am I doing something about it? That’s where my discontent comes from.”

Cadet said intersectionality is of utmost importance when participating in activism to unify and liberate those who are oppressed.

“You always must bring intersectionality to the table, or it’s not activism,” Cadet said.

Sandra Moran, a Guatemalan activist, artist, lesbian and feminist, will speak at Ithaca College on April 7 as part of her East Coast tour, “Women’s Right to Live” through the Guatemalan Human Rights Commission. Staff Writer Elma Gonzalez spoke with Moran about her passion for human rights activism.