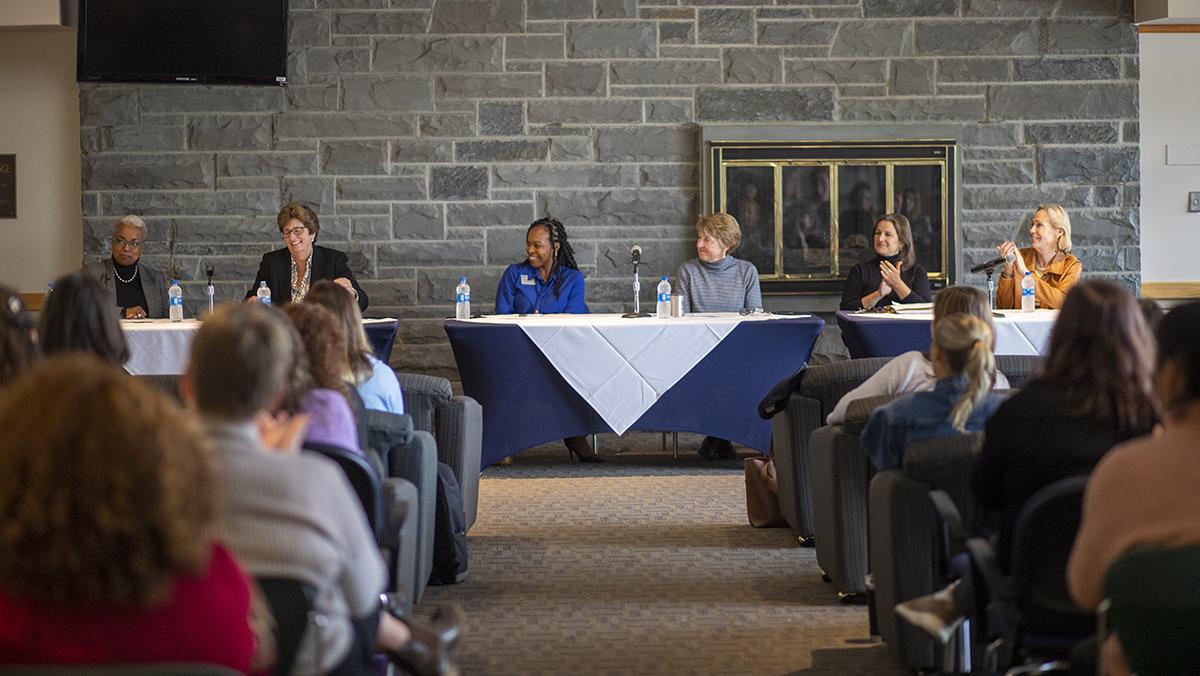 The event was coordinated by Julie Dorsey, chair and professor in the Department of Occupational Therapy, and had about 50 in-person attendees in Clark Lounge along with five speakers. The event’s five panelists were Anne Hogan, the dean of the School of Music, Theatre, and Dance; Odalys Díaz Piñeiro, chief of staff in the Office of the President; Susan Bassett ’79, associate vice president and director of Intercollegiate Athletics; Marsha Dawson, dean of students in the Office of Student Affairs and Campus Life; and Amy Falkner, dean of the Roy H. Park School of Communications. The event was mediated by Cornish.

The panelists discussed their pathway to leadership, knowing their value, self-care and lifting each other up.

Each panelist began by speaking about how they became inspired or interested in achieving a leadership role in higher education, like how Hogan was a ballet dancer and then got her PhD in English Literature, and the role Piñeiro’s immigrant family had on her education.

Bassett spoke about being a student at Ithaca College and then getting her first job as director of athletics at several collegiate institutions, while Dawson talked about being a first-generation student and developing a passion for people. Falkner talked about how playing sports throughout her high school career made an impact in her life and grew her knowledge and experience in leadership.

Bassett said that in the male-dominated field of athletics, she has felt the pressure of having to prove herself to men. However, when playing golf with men, those are the times she has felt the most valued.

“When I stand up to the tee and I hit the ball, all of sudden I become the smartest person out there,” Bassett said. “You know what you’re doing, and when you show men that you are competent at something that they value, it really opens doors. It’s a great equalizer.”

A 2020 study from Inside Higher Ed found that women make up more than half of administrators at colleges and universities across the country, but hold less than 40% of executive leadership roles.

Hogan said self-care can be difficult. She said it is easy for her to set self-care to the side and continue to work, when in reality, it is better to encourage herself to have a gentler mindset.

“I ask myself, ‘How can I be the best leader for my team?’” Hogan said. “I’m trying to work through my journey in which I embrace self-care, not as something I feel guilty about, but something that is, among many other things, essential to do the best of my ability in an academic leadership role.”

Piñeiro spoke about her experiences lifting up other women in the workplace as an introvert.

“I uplift in one-on-one conversations,” Piñeiro said. “I feel it’s important to be present when I know that my colleagues are going through something, and treat them as a human being in those moments, and show that we are in this together.”

Dorsey said it is important to congratulate each other on their successes, and explained how she made time in meetings to give her team time to share these positive experiences.

“I try to be very mindful of recognizing other people’s accomplishments,” Dorsey said. “We’ve actually built something into our faculty meetings called ‘Our Time to Shine.’ I want to model lifting other people up in a space that makes it normalized.”

One final piece of advice from the panel came from Falkner. She said she wanted to emphasize the importance of being one’s own advocate in the workplace.

“It’s important to encourage other women into leadership roles, but I would also encourage you to think about putting yourself in a position where you can help that process,” Falkner said.

To end the program, Cornish wanted to leave the room of women in leadership positions with the important message to open the door for more women after them.

“Many of us here have been the first,” Cornish said. “The goal is to not be the last.”