Park celebrates past and future growth 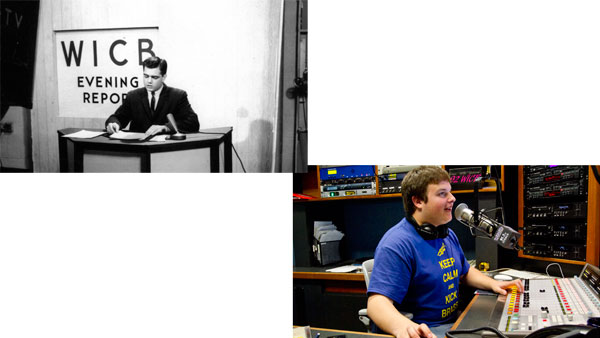 It all began in the basement of the Dillingham Center. In a space with no windows, 10 faculty members and about 450 students made up Ithaca College’s original communications department, which had just a single major — television-radio — and a passion for creativity. It was not until the 1973–74 academic year that the Communications School officially became its own entity, separate from the School of Humanities and Sciences.

To celebrate this growth, the School of Communications will commemorate its 40th anniversary on Alumni Weekend, Oct. 11–13, with faculty, students and visiting alumni. April Johanns, coordinator of student and external relations for communications, said the main event on Friday will be screenings for the Golden Doorknob Award in the Park Auditorium. The Golden Doorknob is a short-film competition where students find the most creative way to portray how to kill a person with a doorknob.

Melissa Gattine, the marketing communications manager, worked with Johanns in planning the anniversary events. She said she is especially excited about the Golden Doorknob screenings.

“It is 20 years of alumni who created one [doorknob] and remember it,” Gattine said. “So there’s that nostalgia when coming back, and they want to see how the tradition is carried on.”

Junior Clinton Butler, a television-radio major, is working on pre-show details for the event and said he has watched some of the old doorknobs in order to decide which will make it into the screening.

“Because it’s from so long ago, the footage isn’t so great, but that’s part of the charm of it,” Butler said.

An open house of the Transmedia studio, a co-curricular organization housed on The Commons that gives students the opportunity to produce projects across multiple media platforms, will take place Saturday. The open house also will include coffee with Dean Diane Gayeski. Later that afternoon, alumni and current students will have roundtable discussions on topics including fantasy sports production, leadership, social media and journalism reinvented.

Andy Orgel ’74, CEO of 1Degree Media and Entertainment Company and co-founder of the A&E and MTV networks, said intermingling between current students and alumni is an integral part of the Park School’s identity, and events like the anniversary celebration are perfect venues for it to happen.

“Alumni helping each other has been a consistent activity throughout the last 40 years,” Orgel said. “We try to bring alumni, whether they are recent graduates or graduates from a long time ago, together in a lot of different work situations to help to mentor, to help with potential career opportunities.”

Sunday will feature an open house in the Park School with different themed decade rooms and a champagne toast to the anniversary.

For alumni, Gayeski said, new student faces is not the only change they will notice.

“I am sure there will be much surprise [from alumni] at not only the physical plant, because there have been a lot of renovations and certainly a lot of additions of equipment every year, but also the changes that they’ll see in the faculty and the curriculum,” Gayeski said.

Even though the Park School building has seen significant change in its 40 years, Johanns said she hopes the spirit of the school will carry over for years to come.

“I just want this to be a place where students can continue to be creative, be supported,” Johanns said.

Gayeski said the Park School was able to grow but maintain its supportive atmosphere throughout the 40 years partly because of bold leadership, as well as a little good fortune. According to Gayeski, the first dean of the Park School, John Keshishoglou, had a daring vision with little resources.

“This is a time to go back to our roots and [discuss] why we started and what propelled us through all the years, and to honor all the people who came before us to make what we have now possible,” Gayeski said.

“It turned out to be $14 million,” Bohn said. “At that point in time, it was the single largest gift in Ithaca College history … It helped to transform the school and sustain the school and make it even better and bigger.”

Bohn said he still has a frame on his wall holding a copy of his secretary’s note to call the Pendleton family back about the donated money.

Gayeski agreed that in the next 40 years, she hopes the Park School will still be supporting creative minds and continuing to adapt to an ever-changing industry.

“What I have experienced is that there is a great spirit of collegiality and cooperation among students, a real spirit of innovation, a spirit of independence in terms of students being able, responsible and willing to do most of the work of our co-curricular operations on their own,” Gayeski said. “There is an energy here and a willingness to experiment with new ideas.”