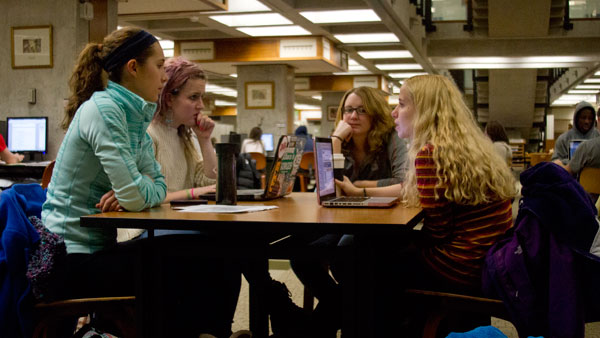 The current location of the Office of Student Disability Services in the Towers Concourse is not equally accessible to all the 682 students currently registered, according to a group of students who have petitioned to move the office to a more central location.

In tandem with this issue being raised, SDS is planning to develop a focus group that will allow participants to share their concerns about the office’s services and its current location. SDS will hold informational meetings about the impending focus group at 12:15 p.m. and 5:15 p.m. Feb. 13 in the Campus Center’s Six-Mile Creek room and Taughannock Falls room, respectively.

As part of a group project for the class The Culture of Disability,  junior Sarah Frizzell, sophomore Emily Kovach and sophomore Susie Brancaccio created a petition last semester asking Ithaca College to move SDS to a more accessible location for students with disabilities. Frizzell said the petition was circulated through social media and has received 130 signatures so far.

One of the main concerns with the office’s current location is students do not know where to find services available to them, Brancaccio said. Linda Uhll, manager of SDS, said if the office was relocated to a more student-populated area, students who were originally unaware of the services may be more likely to stop by to inquire about them.

Brancaccio said the petition may also help inform students who could utilize SDS services of where to find its current location.

“A lot of people don’t go up to the Towers if they don’t live there, so it’s just raising awareness of where the SDS office is located for people who don’t know,” Brancaccio said.

Frizzell said she has spoken to students with physical disabilities who believe the office’s current location is also inconvenient for students who already know about it. She said she spoke with a peer who found the trip exhausting and time-consuming.

“It’s just far away,” Frizzell said. “It’s not practical, and you don’t go up there anyways, so if you know you may need help and accommodation with SDS, you might not go because it’s not convenient.”

“I would just want to make sure that all of the staff is located together since we need to communicate almost continually,” Uhll said. “Moving to the Towers Concourse allowed us to have all of the staff together and most of the rooms used for testing in close proximity.”

Sophomore Johannah Litwin, who learned about the focus group through an email sent to students registered with SDS, said she is not happy with the lack of accessibility found on campus, especially when compared to other college campuses. She also said the physical constraints disadvantage anyone with a physical disability.

“It’s a little bit obnoxious because the school considers themselves to be so open, accepting of all sorts of differences,” Litwin said. “I mean, disabilities are the greatest minority … and yet it’s often the one that people forget about.”

Frizzell said she plans to get the word out about the petition and wants to bring the proposal of this changed location to people in higher positions, such as President Tom Rochon, the Ithaca College Board of Trustees, and the Student Government Association.

“As of right now… we’ll see if we can keep more of a movement going,” Frizzell said.