Members of the POC at IC group assembled around 8 a.m. today at the Dillingham Fountains chanting “Tom Rochon; no confidence.” “No more dialogue; we want action,” as they awaited tour groups of prospective students and their parents as part of the Ithaca College Fall Open House.

About 30 group members stood near the Dillingham Fountains and gave speeches to passing tour groups, while handing out copies of The Ithacan’s Oct. 22 issue with a statement by the group inside.

POC at IC stands for People of Color at Ithaca College, a group that was formed in response to recent racial tensions at the college.

The group met around 7:45 a.m. outside the Dillingham Fountains to place its statement inside hundreds of copies of The Ithacan. Group members also wrote “Look into #POCatIC” and “FB: POC at IC #POCatIC, ICWhatsGood,” on the front page.

Most tour groups stopped near the protestors and listened while one of the group members talked about personal experiences.

Some of the members told students the college was not a safe place for people of color, while others highlighted that racial issues are prevalent on college campus’ across the country.

One POC at IC member told a group that when she was a prospective student, no one told her about racial issues on campus.

So now, the POC at IC member said, POC at IC is trying to inform prospective students.

Some members of the POC at IC group also walked around and handed out copies of the newspaper to prospective students in the Athletics and Events Center, where the open house is based, and at several locations on campus. 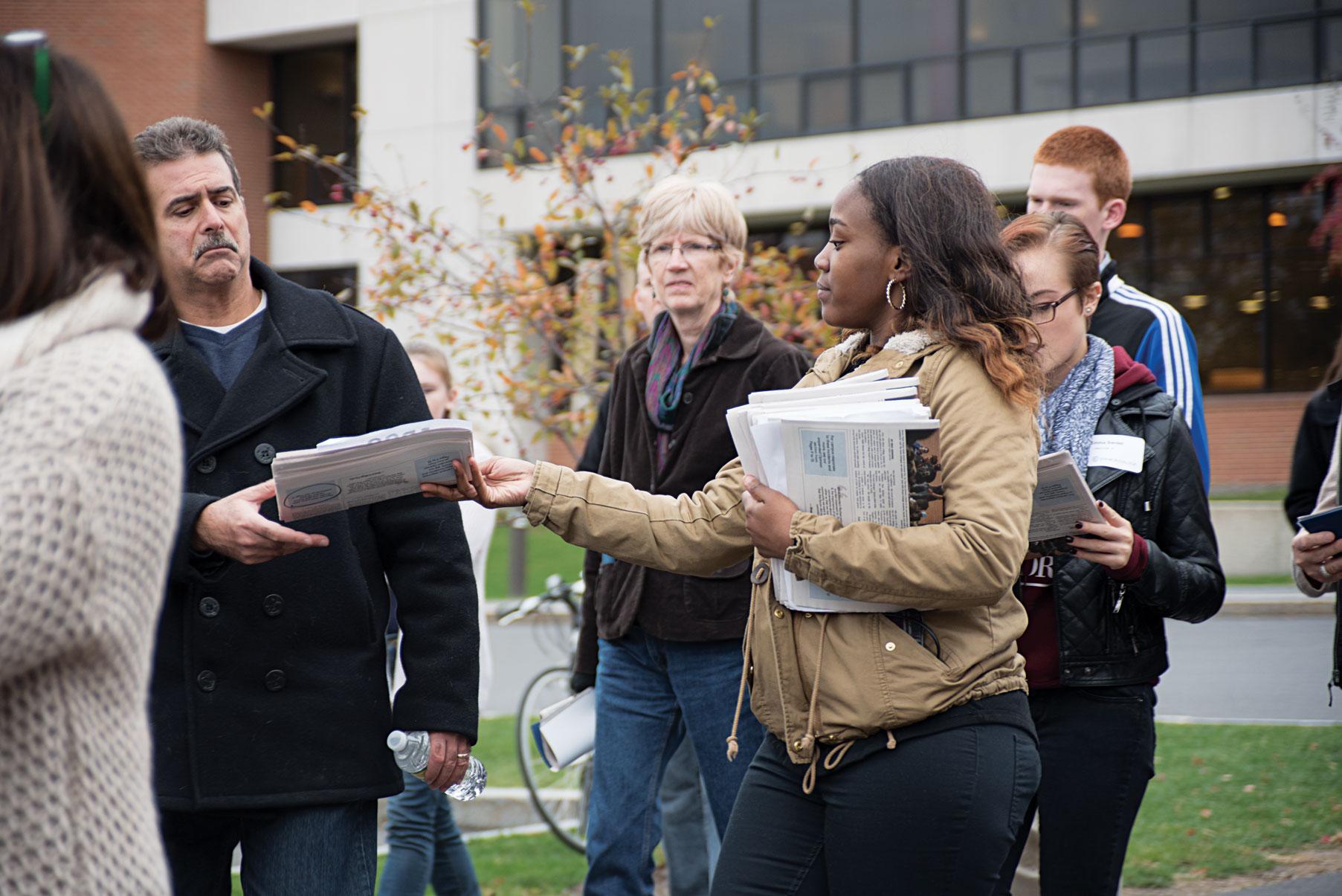 A member of POC at IC hands out a copy of The Ithacan with the group’s statement inside. Amanda den Hartog/ The Ithacan

This action follows an Oct. 21 rally in which students spoke out against racism and demanded action.

The Oct. 21 rally came in the wake of two events that angered many in the college community: racial comments made by an alumnus at the Blue Sky Reimagining Kick-Off event Oct. 8 and planned “Preps and Crooks” themed party which was cancelled after backlash against the racially-charged theme on social media.

Following the Oct. 21 rally, members of the student group met with President Tom Rochon and Benjamin Rifkin, provost and vice president for educational affairs, Oct. 23. Rochon laid out action-oriented goals of hosting weekly “Town Hall Meetings” among students, faculty and administrators and establishing cultural-competency education training for all members of the campus community. Students walked out of the 11-minute meeting after Rochon finished speaking without responding to his plan.

The description on the Facebook event for the “POC at IC Open House Rally” said the event would continue to express a vote of no confidence for Rochon and that ralliers wanted action instead of more dialogue, two themes present at the Oct. 21 protest.

“Given the administration’s response and lack of action, we have to communicate the movement with potential members of the IC community,” the description said. “We are organizing early to coincide with the Open House for prospective students because every potential ‘customer’ has the right to know about the racial climate at Ithaca College.”

In a statement released on the POC at IC Facebook page, the group said the event was aimed at introducing and informing people about the movement and encouraging them to join if they choose to attend the college.

According to the statement, “This not an attempt to pressure people not to attend Ithaca College. All this is, is a way to educate and notify prospective students of what’s going on, not only on campus but also in the country.”

In preparation for the protest, the college included a statement in admissions folders given to all prospective students that said the college embraces free speech and student engagement, and the curriculum encourages critical thinking.

“We recognize our community is not immune to the challenges which face our nation or world,” it said. “You may observe students today actively lending their energy and voices to support a better campus community and stronger culture of diversity and inclusion.”

In response, POC at IC released a counter-statement in which they said they “anticipated the appropriation of narratives by a statement provided by the administration to speak for the events that occur on this campus.”

“When a community is not allowed to speak for itself, it inherently begins to lose its validity, its power. They have given you a story; we have a different narrative. We hope you are open to hearing perspectives other than that of the administration,” the statement said.

The statement then directed prospective students to the fountains in front of the Dillingham Center, where the POC at IC students were gathered.

President’s Hosts often encouraged students to take copies of The Ithacan and listen to protestors.

“The President’s Host Committee, we’ve talked about this and spoken about this, and we are definitely on the side that we should have students really speak their mind,” President’s Host Sharon Mejia said. “We are going to give them the opportunity to speak, even on our tours if they would like, so families can be aware of what is happening and know that if they do come to our campus, they won’t be shied away from this but brought towards this.”

The administration announced Oct. 23 it would be holding a meeting at 5 p.m. Oct. 27 in the A&E Center on “Addressing Community Action on Racism and Cultural Bias” in conjunction with the leaders of the three governance bodies at the college: Faculty Council, Staff Council and the Student Government Association.

Dave Maley, senior associate director of media relations at the college, said the college hopes to attract prospective students who are as passionate as members of POC at IC.

“The college hopes that the visitors to campus were able to observe and — where possible — engage with students who are  passionate about a very difficult issue that the college recognizes is an issue, not only on our campus but in the wider community of Ithaca and throughout the country,” Maley said. “We hope that they had the opportunity to understand and witness and observe that the college recognizes this issue as an important one, and our students are passionate about it, and that is the type of student we hope to bring to Ithaca College.

The reaction from prospective students to the protest was mixed.

“I think it’s really good to see the community come together to protest. It makes change,” said Dana Kirk, a high school senior from Monroe, Connecticut.

Bernadette Currie, the mother of a prospective student, said she and her son were encouraged by the protestors.

“What [my son and I] were discussing is that we were really surprised that students are vocal, and they can be vocal,” she said. “We certainly understand the passion behind it. I don’t know how often this happens in Ithaca, but I told [my son], someday you will be passionate about something, and you can protest that.”

Meredith Nash, a prospective student from Massachusetts, said it was great to see students expressing their opinions.

“I think that it’s good that people are expressing their feelings that there is still racism out there, but I wouldn’t say it’s really affecting how I’m looking at the college,” she said.

Rachel Lewsey, a prospective student from Hoosick Falls, New York, said the protest got in the middle of her tour.

“I thought it kind of ruined the tour,” she said.

Josie Leonard, a senior from Keene, New Hampshire, said the rally made her nervous about attending the college.

“It made me feel apprehensive toward this college environment, that you would run into teachers and staff who don’t want to fix the problem,” she said.

Lauren Killin, a prospective student of color from Buffalo, New York, said he thought it was good students were protesting, and he would stand behind them if he were a student. However, he said it was sad but necessary.

“You’re here to get a college education, and you’re worried about police brutality? That’s a major issue,” he said. “This changed my opinion of the school. I would never have thought that this would be going on here. After that, it definitely lowered my standard of it. It was a shock to me. I don’t even know what to think.”