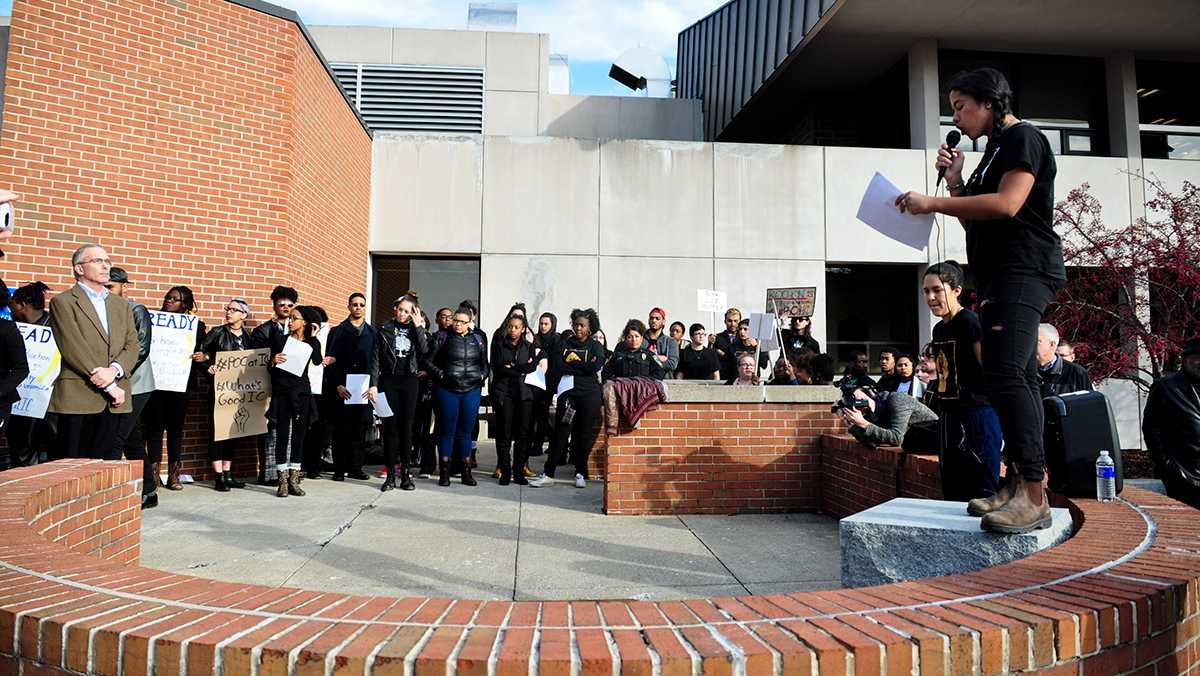 The familiar “Tom Rochon; no confidence” chant took a new form at POC at IC’s “Demands Walk-out” Dec. 11. President Tom Rochon was summoned to the stage by POC at IC to hear a formal list of demands, with the crowd now chanting: “Tom Rochon, resign.”

Approximately 300 members of the campus community gathered at Free Speech Rock to hear the list of demands drafted by POC at IC, and to call for Rochon’s resignation.

POC at IC, which stands for People of Color at Ithaca College, emerged following a number of racial incidents at the college earlier in the semester, including the planning of a racially themed party by off-campus fraternity AEPi and racial remarks made by alumni of the college at the Blue Sky Reimagining Kick-Off event Oct. 8. POC at IC held its first walk-out Nov. 11, with over 1,000 students walking out of class to show solidarity with other campuses nationwide and to call for Rochon’s resignation.

The “Demands Walk-out,” began at about 1:10 p.m., with the crowd consisting of students, faculty, staff and administrators to hear POC at IC “present demands and observe Tom Rochon’s display of incompetence to lead as President of our institution,” according to the Facebook event.

POC at IC members began the rally with the “Tom Rochon; no confidence” chant, then called for the crowd to repeat a new chant: “Tom Rochon, resign.”

POC at IC repeatedly asked Rochon to come to the stage to listen to demands, however he did not immediately join them. Rochon used a megaphone to respond, “I can see and hear you from here.” He then asked the group, “Are you prepared to engage in dialogue?”

The group called for the crowd to create a “peaceful pathway” for Rochon to walk through and join POC at IC at the front of the crowd. The crowd linked arms as Rochon walked through from the entrance of Campus Center to Free Speech Rock.

Once Rochon was near the group, the event continued as sophomore POC at IC member Violet Perry read a document on Rochon’s lack of leadership at the college. Sophomore Tyler Reighn then took the floor, reading a factsheet on Rochon’s involvement as the chair of Tompkins Financial Corporation, stating that this involvement was compromising his ability to effectively lead and devote time to the college.

Freshman Alyse Harris joined the stage to discuss POC at IC’s view that the college may be labeled as “diverse,” however Rochon is not equipped to deal with the number.

After two more POC at IC members spoke, a list of demands from POC at IC was read to Rochon and the crowd. The group’s first demand, repeated after each subsequent demand, was the resignation of Rochon.

Other demands included a fair environment for “marginalized” groups and communities of all kinds, including the lesbian, gay, bisexual and transgender community, female students of color and more. POC at IC spoke of the importance of a president that is interested in talking to students. The next demand called for tenure given to faculty members that support the cause and stating that faculty members and students should not be punished for their involvement.

The group demanded that the future president be elected by a democratic process involving students, faculty and staff input.

A final demand called for increased transparency from the Ithaca College Board of Trustees and increased access to updated information on board members. They also demanded more student trustees and voice on the board.

Rochon was then given two minutes to respond to the demands. He repeated his commitment to creating an inclusive environment and the efforts being undertaken at the college.

The rally ended with freshman POC at IC member Marissa Booker asking students to join them in the continued occupation of Peggy Ryan Williams Center, outlining their efforts to create a shared community space.

One last time, the crowd joined in on the chant “Tom Rochon, resign,” as the crowd dispersed.

The updated, extended version of this story can be viewed here.