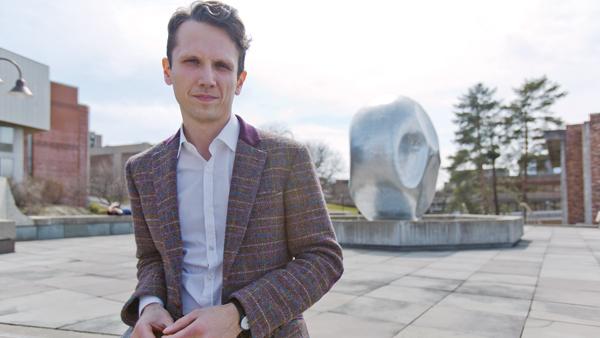 “The students here are awesome,” Adnan Selimovic, instructor in the politics department, said, leaning back in his desk chair. “They’re tough. They don’t open up lightly.” He says he understands, though, because there is trust that must be earned as a new instructor.

Selimovic has a silver hoop in his right ear, and his brown hair is shaped in a ’50s crew cut. His blue denim button-up is covered by a plaid, wool blazer. He crosses his legs and bright, kelly green socks obviously rise out of his brown leather Mephisto shoes.

Last fall was his first semester teaching. Selimovic, a Ph.D. candidate in York University’s Graduate Program in Social and Political Thought in Toronto, Canada, is working to finish his dissertation on youth cultures and technology while teaching courses at Ithaca College. This semester, he is teaching Political Economy of the Illicit Drug Trade in the United States, Political Theory of Self Consciousness and U.S. Politics Through Scandals.

“Most of these intro classes are just about trying to put on the brakes and saying, you know, you don’t have to necessarily identify with the systems around you,” Selimovic said. “I always try to stay aware of the political economy of being a young person and involve that in every class.”

Aside from the shelves of neatly lined books that surround his desk, the walls of his small office on the third floor of the Muller Faculty Center are almost completely blank. That is except for a chart of Foucault’s Panopticon and an ad ripped out of a magazine given to him by his partner, Nadja Eisenberg-Guyat.

He said people notice that it’s still blank after a year, but he doesn’t think it’s that important.

“My parents always say don’t get invested in things that are material,” Selimovic said.

Selimovic was born in the Socialist Federal Republic of Yugoslavia, where he lived with his mother, father and younger sister until the country’s fall in the early ’90s. Selimovic said he watched his parents, who had “invested everything into a political system,” get ousted. The world he knew was shattered, and his family lost everything.

He spent his childhood living in refugee camps in Turkey and Bulgaria and moved to the U.S. in 1998. As a teenager living in St. Louis, Mo., he said, he explored the new environment to teach his younger sister about American society.

“All of the moving and translating ideas is when I became interested in socialization, psychosocial dynamics, manipulation, coercion and those sorts of things,” Selimovic said.

Selimovic finished his course work as a doctoral student at York University in Toronto, and with only a dissertation to complete before receiving his PhD, he decided to get off campus and give teaching a try.

“Universities are still places where we can have political pedagogy,” Selimovic said. “It can be about intergenerational communication that matters.”

Shaza Elsheshtawy is a senior politics major enrolled in Selimovic’s Political Economy of the Illicit Drug Trade in the United States. After four years of politics courses, she said she could tell Selimovic was different right away. She noticed Selimovic used feminine pronouns instead of the typical “his” and “he” and also included a list of conditions under which a student should reconsider enrolling, such as if they “cannot stomach the restlessness of not knowing the answer.”

“To me that is important,” Elsheshtawy said. “The world isn’t easy, isn’t clean. Explaining it shouldn’t be so either.”

“I never have problems with students, because my solidarity is with them as learners, you know, as young people who are just trying to get some sort of bearing on reality,” Selimovic said.

Eisenberg-Guyat, an anthropology student who is currently doing ethnographic research about drug use in Philadelphia at CUNY-Hunter, said she enjoyed watching Selimovic build confidence in his ability to teach.

“As a young instructor, you don’t want to be authoritative or a disciplinarian,” she said. “But he still holds his students responsible for their serious commitment to learning, and that is incredibly important.”

Selimovic said his time at Ithaca College has been “great,” though teaching four classes a semester can be “pretty intense.”

“When I talk to my colleagues and older colleagues in mentor positions … I think they think I am exaggerating, that I’m making it seem better than it is,” Selimovic said. “I’ve gotten all of the institutional support I need, plenty of space, all the resources I need to put something together, and the students are awesome.”