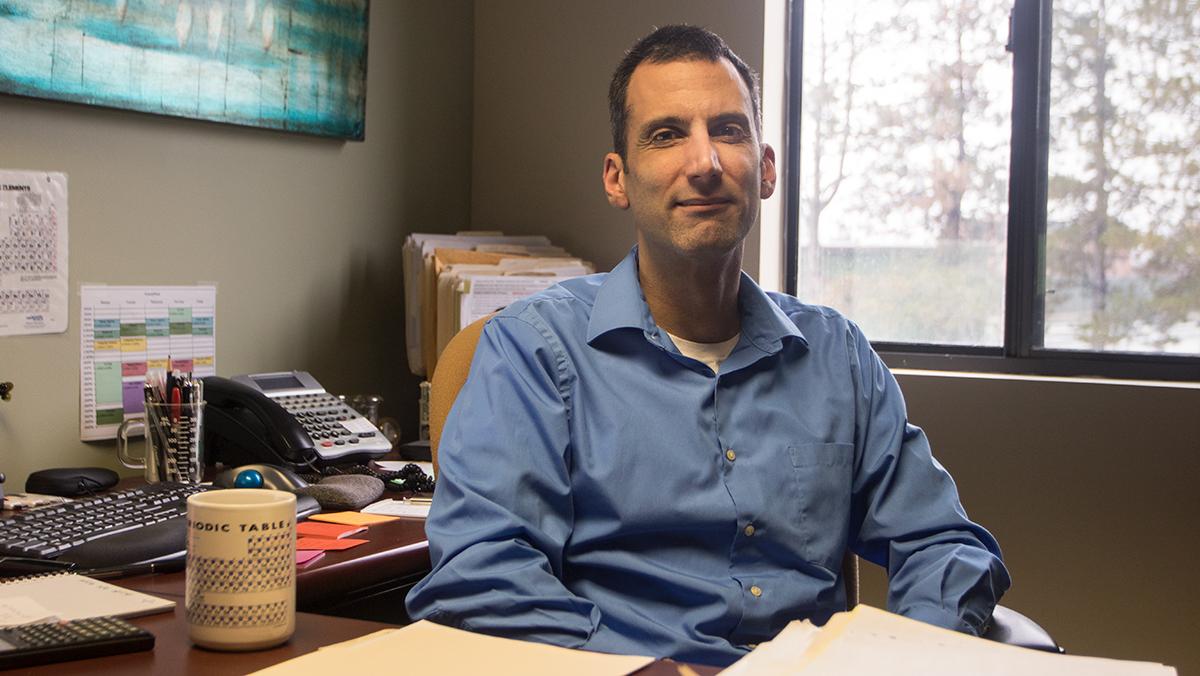 Sam Fuller/The Ithacan
Vince DeTuri, director of the Integrative Core Curriculum, said the Park School's proposal is on hold until the ICC program review during the 2018–19 academic year. The proposal calls for an expansion of the Liberal Arts and Society theme, which currently is only available to transfer students.
By Ana Borruto — Senior Writer
Published: April 18, 2018

A proposal calling for the expansion of the Liberal Arts and Society theme in the Integrative Core Curriculum would provide all students with a wider variety of course options than the other six themes.

Faculty members of the Roy H. Park School of Communications proposed expanding the Liberal Arts and Society theme to all Ithaca College students, not just those who have transferred to the college. The Liberal Arts and Society theme is only available for students who enter the college with an associate or a bachelor’s degree from another institution. Students in this theme do not have to complete the same perspectives and requirements as other themes.

Jack Powers, associate professor and chair in the Department of Media Arts, Sciences and Studies, said he and six other Park School faculty members submitted the proposal after receiving a significant number of survey responses from students within the school.

Powers said a majority of the respondents from each theme had concerns with the themes aspect of the ICC. A total of 676 students responded to the survey — 200 seniors, 160
juniors, 161 sophomores, 154 freshmen and one graduate student, all in the Park School. Around 86 percent of the students were in favor of eliminating the themes. The survey showed almost 83 percent of the participants found the themes to be restrictive.

Powers also said students expressed concern about how limited the courses are within each theme. The proposal stated students “have to pass over courses that appeal to them in favor of taking ‘the only courses they can get.’”

Peter Johanns, associate professor and television-radio program director for the Department of Media Arts, Sciences and Studies, said he signed the proposal because he has around 120 advisees and because many have expressed frustration since the implementation of the ICC in 2013. He said that when students choose a theme at orientation before the start of the
academic year, they do not have a complete understanding of what the themes are or the notion of perspectives.

Johanns said the group of faculty who created the proposal is not anti-ICC. He said he sees the benefits of the ICC as completing perspectives beyond one’s major.

Vince DeTuri, director of the ICC, said the Park School professor’s proposal was considered by the CCR and the All School Curriculum Committee. He said the proposal is on hold until the ICC program review during the 2018–19 academic year, when DeTuri can conduct a larger discussion with campus community members to see what changes they want to see.

After reading student concerns within the Park School survey, DeTuri said he could not understand why the proposal suggests the ICC is more restrictive than integrative. He said students should be able to take whatever courses they want to as long as there are enough seats left in the course.

“In some themes and some perspectives, the seats are tight, but they do open up over the years,” DeTuri said. “We are not seeing graduation issues because of this.”

DeTuri said obtaining feedback from the campus community has been unsuccessful in the past. Last year, he said he held six theme-based open sessions for students to discuss concerns with the ICC and perspectives, all of which had zero attendees. He said he has met with student leaders of various groups, such as student-athletes and President’s Hosts, in order to obtain more targeted feedback.

There are changes being made to the ICC, DeTuri said, and the program review will be a more holistic review. For example, in April it was announced that the quantitative literacy readiness prerequisite for the ICC is no longer required for students to enroll in a QL-designated course.

“Faculty teaching the QL-designated courses have said that it’s not a prerequisite they need,” DeTuri said. “CCR looked at the faculty response and agreed we don’t need that.”

Besides the most recent proposal made by the Park School faculty, the Student Governance Council proposed condensing the ICC themes from six themes to four. The proposal suggested combining the Power and Justice Theme with the Quest for a Sustainable Future Theme, and combining the Mind Body and Spirit with World of Systems. Students who are enrolled in Power and Justice, for example, have difficulty registering for courses because of how limited the perspective courses list is, according to the SGC’s proposal.

Leann Kanda, associate professor and chair of the Department of Biology, submitted a proposal in March to allow a retroactive ICC designation of courses. This means if a course that was not ICC-designated at the time of a student’s enrollment becomes ICC designated the following semester, the student should be able to petition earning ICC credit for that course. In the proposal, which she first submitted in November 2016, Kanda stated she had three seniors who had to take additional classes that duplicated the material in classes they previously took. The proposal has been under CCR review since January.

Sophomore Joshua Lam said he recently switched his major from biology to Spanish. In doing so, he said none of the credits he earned from his biology major count toward the Natural Sciences perspective for his Identities theme.

“I still have to take a Natural Sciences, which is most likely to be a 100-level course as a junior next year,” Lam said. “I’ve taken two years’ worth of biology and chemistry classes.”

Freshman English major Justin Wooster said he does not think the ICC itself is the problem, because he believes the college wants to produce well-rounded students who explore classes outside of their major. He said the problems are the themes and perspectives. Wooster said there are only four classes in Identities for Natural Sciences.

“They literally just make it 50 times more difficult for people to register for classes and graduate on time and limit people in what classes they are interested in,” Wooster said.

Senior journalism major Matthew Lucas said he thinks the expansion of the LAS theme is a positive first step in dealing with the dilemma of the ICC.

Johanns, as a member of CCR, said there has been mostly positive feedback from the various schools and their curriculum committees about the proposal. He said there was some concern regarding students’ abandoning their current theme to complete the degree requirements more easily if the Liberal Arts and Society theme were open to all students.

Dan Breen, chair of the Department of English, said that from a practical point of view, the extension of the LAS theme would widen the variety of courses for students. He said the proposal has conceptual implications.

“If the college decides to head in this direction, it probably would be better, and more direct, to eliminate the themes all together and move towards a distribution system,” Breen said.

Johanns said that when the ICC idea was created in 2012, a Middle States Commission on Higher Education’s assessment said, “there needs to be a common education philosophy at Ithaca College.” He said the college took this philosophy the wrong way.

“I am hopeful that as we assess the true effectiveness of the ICC, that we as a faculty can really take a look at what is the most effective means of establishing a general education philosophy at this college, and maintain those student learning objectives, while not making it so restrictive that it is causing our students a great deal of dissatisfaction,” Johanns said.

This year, after visiting the college in February, Middles States said the college needs to review and improve the effectiveness of the ICC.