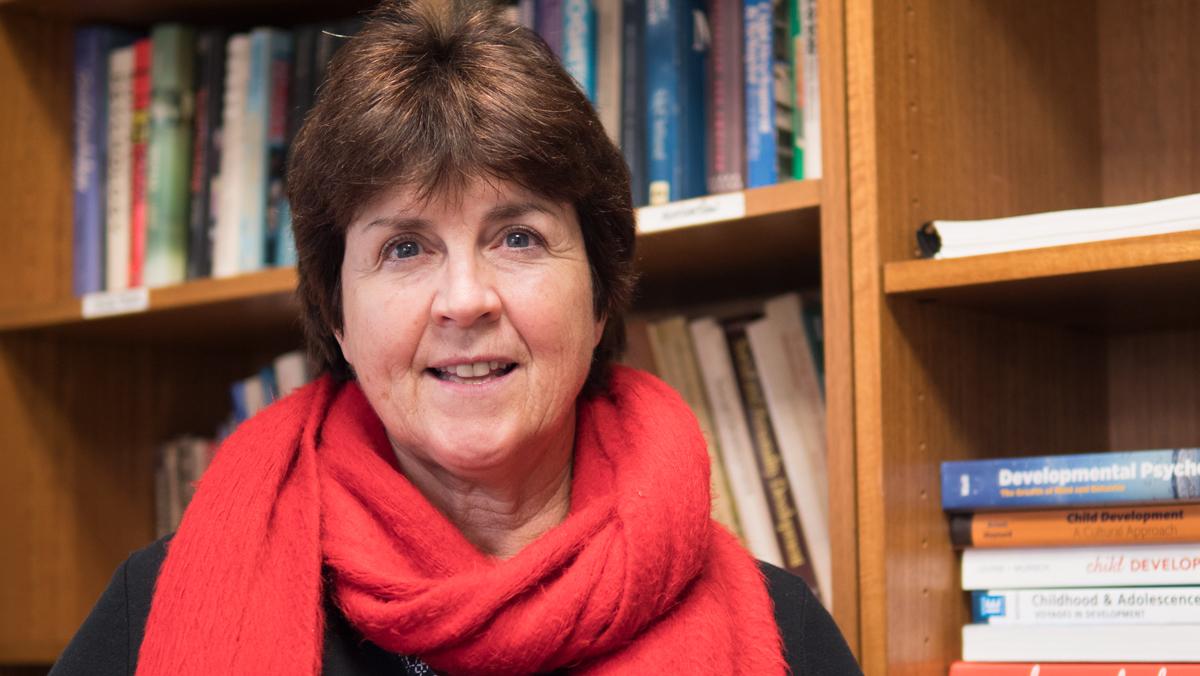 Elias Olsen/ The Ithacan
Cyndy Scheibe, professor in the Department of Psychology and founder and executive director of the college’s media literacy initiative Project Look Sharp, co-authored a guide for educators to use to increase media literacy.
By Madison Moore — Staff Writer
Published: November 6, 2017

Cyndy Scheibe, professor in the Department of Psychology and founder and executive director of the college’s media literacy initiative Project Look Sharp, has co-authored a pamphlet focusing on the importance of media literacy in building inquiry and self-expression in classrooms.

The QRG is designed for teachers, mainly K-12, as a quick resource to understand media literacy. Media literacy is the ability to access, analyze, evaluate and create media in a variety of forms. The guide includes why media literacy is important, how to become media literate and how educators can integrate it into curriculum.

Scheibe and Rogow were contacted by their editor, Carol Collins, to create a QRG on media literacy for the Association for Supervision and Curriculum Development, an organization that aims to support educators. According to the ASCD website, they wanted to create QRGs that covered fundamental education topics in a format that was useful for time-pressed study groups or individuals.

“They discovered a need amongst their memberships for just, quick, short guides that could easily summarize an important topic that lots of educators wanted to address,” Rogow said.

Scheibe previously co-authored “The Teacher’s Guide to Media Literacy: Critical Thinking in a Multimedia World” with Rogow and said that the QRG is a reflection of this work.

“It’s an updated version of what we put in the book but also consolidated from a 300-page book to a six-page guide,” Scheibe said.

The guide contains four insights about media messages, eight media literacy competencies and 48 classroom strategies in a tri-fold pamphlet. It aims to give teachers strategies to become media literate themselves, including having access to high-quality media tools. It also shows teachers how to decipher what media can be trusted using questions of inquiry such as “Who made this?” and “Who is their target audience?” The guide also includes classroom strategies for developing media literacy in disciplines such as social studies, science, technology, engineering, math and health. 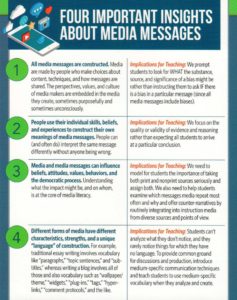 The guide outlines four insights about media that aim to give teachers tools to become media literate and educate their students to as well. Courtesy of Cyndy Scheibe.

The QRG is more commonly used in alternative and private schools because these schools have more flexibility in their curriculums than public schools do. However, media literacy works to address national standards and common core standards that apply to public schools, Scheibe said.

Rogow said since it is now a digital world, there is a new emphasis on critical inquiry, deep thinking and reasoning with evidence. She said media literacy helps to address these processes through core subject areas.

The college’s Project Look Sharp, founded in 1996, also works to create media literacy through curriculum writing, lesson plans and other free educational materials. Some of the materials that Project Look Sharp has created were included in the new QRG.

Scheibe and Rogow have also created a booklet through Project Look Sharp called “12 Basic Ways to Integrate Media Literacy and Critical Thinking into Any Curriculum.” 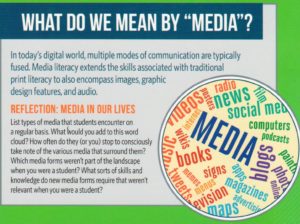 The QRG aims to spread the importance of media literacy to educators so they can implement strategies of critical thinking into their classrooms. Courtesy of Cyndy Scheibe

Elizabeth Bleicher, associate professor in the Department of English and director of the Exploratory Program, said she pushes her students to question messages media try to portray through music in order to understand how media works.

“It gets people thinking critically about something they consume mindlessly,” Bleicher said.

Bleicher attended one of Project Look Sharp’s summer institutes, where she learned about media literacy. She said she uses some of their curriculum material for various class projects.

Junior Trang Kim took Scheibe’s class, Media Literacy and Popular Culture, in Spring 2017. She said that the class talked about topics she had been recognizing on her own, but addressed these topics in a more structural way.

“It makes me definitely more aware of how media is trying to affect the way I think,” Kim said.

Kim said she wants to be a media content creator after college and potentially start her own organization in media literacy in her home country of Vietnam, where censorship of media is heavy.

Kim is currently Project Look Sharp’s social media marketing intern who helps promote the organization as a leader in the industry through various social media outlets.

Sophomore Ethan Seftor also took Media Literacy and Popular Culture in Spring 2017 and said that he joined the class because he likes critical thinking.

“I gained critical insight toward things that I wouldn’t have really thought much about,” Seftor said.

Seftor said he thinks it is an essential class for people to take, especially considering the current political state. He said he is interested in the potential creation of a media literacy minor.