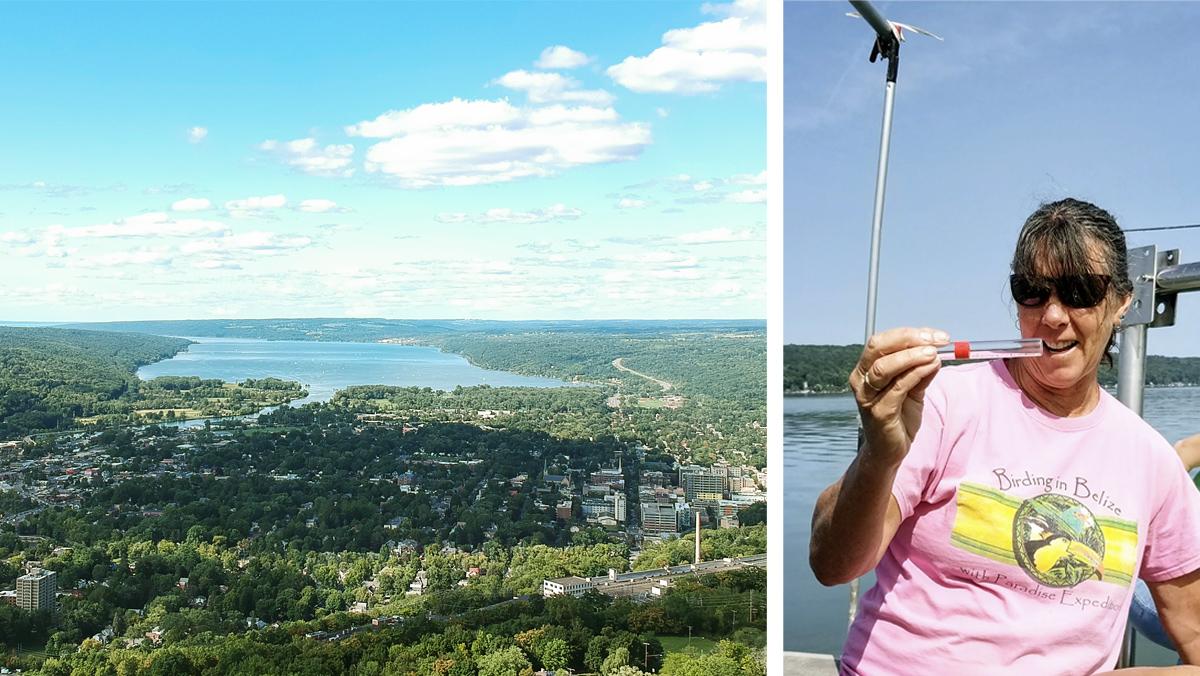 Cayuga Lake is filled with tiny pieces of plastic, floating through the waters that many in Ithaca swim in and drink from. Though the plastics have no immediate effects on humans, the pollutants pose a threat to the life in the lake, said Susan Allen, professor in the Department of Environmental Studies and Science at Ithaca College.

These small pieces of plastic are known as microplastics and can be as big as five millimeters in diameter, according to the National Oceanic and Atmospheric Administration. These plastics can become lodged in the digestive tracts of bacterial life like the daphnia in Cayuga Lake and result in bacterial death, disrupting the entirety of the food web, according to Amy Uhrin, chief scientist of The National Oceanic and Atmospheric Association Marine Debris Program.

Allen works with three handpicked students in the field and the lab. The students help Allen with tasks such as density separation and breakdown of biological residue in the lake. Training the students takes a long time because Allen must teach them proper procedure so that they do not contaminate the samples, Allen said. Such procedures involve keeping their clothes from touching the samples, as plastics in their clothes could contaminate samples.

Senior Julia Keene works closely with Allen and a team of two other students researching the presence of microplastics in the southern end of Cayuga Lake. Keene said she hopes the research will show Ithaca residents the effects that their use of plastics has on the lake.

“Takeaways for the community would be the harmfulness of using [single-use] plastics and that what you are using on a daily basis … does have an impact on the environment and the microplastic product, and to be aware of your own factor in that and to do your best not to use single-use plastics,” Keene said.

When Allen’s current research project in Cayuga Lake is completed later this year, she plans on researching the major sources of microplastics feeding into the Cayuga Lake Watershed.

“In order to answer the question of what the source [of microplastics] are, we have to put up collectors that are collecting it from air, water, snow, wastewater treatment plants — it almost doubles the amount of work that we are doing in the southern end of Cayuga Lake,” Allen said.

Despite this expansion in scope, Allen only plans to increase her student research team by one or two students due to the amount of time it would take to train and manage them all.

“The other consideration is not so much for human health as it is for wildlife — that if the particles are matched with the digestive tract of the animals, then they can decrease their ability to feed and evoke other implications of their survival and their reproduction,” Allen said. “If you scale that up, larger plastics cause problems for marine animals, so smaller plastics can cause that same kind of blockage or starvation in the lower levels of the food web.”

While the microplastics are damaging the lower levels of the food web, they have had no known impact on the algae and algal blooms that Cayuga Lake has been suffering through for the past few years. Allen said she attributes the blooms to global warming and increased nutrients in the lake from farm runoff.

Getting the microplastics out of Cayuga Lake’s waters has proven to be a challenge as there is no effective model for clearing microplastics on a large scale, Allen said. The best the community can do at the moment is to cut down on the use of single-use plastics in their daily life, Allen said.

Last year, the New York Legislature passed a law banning single-use plastic bags from stores, a project Allen was working on last year. However, Allen said a ban will not stop the influx of microplastics into Cayuga Lake.

Currently, there is no known threat to the drinking water of residents around Cayuga Lake watershed, said Roxanna Johnston, lab director and watershed coordinator for the City of Ithaca Water Treatment Plant.

“For all the standards that exist now, and have existed for a while, both federal and state, all the water suppliers test regularly for them and they meet those standards,” Johnston said. “[They] are based on health concerns, and then they build in 1000 times extra safety measures. … The best thing to do is to keep all of these things out of the water system to begin with.”