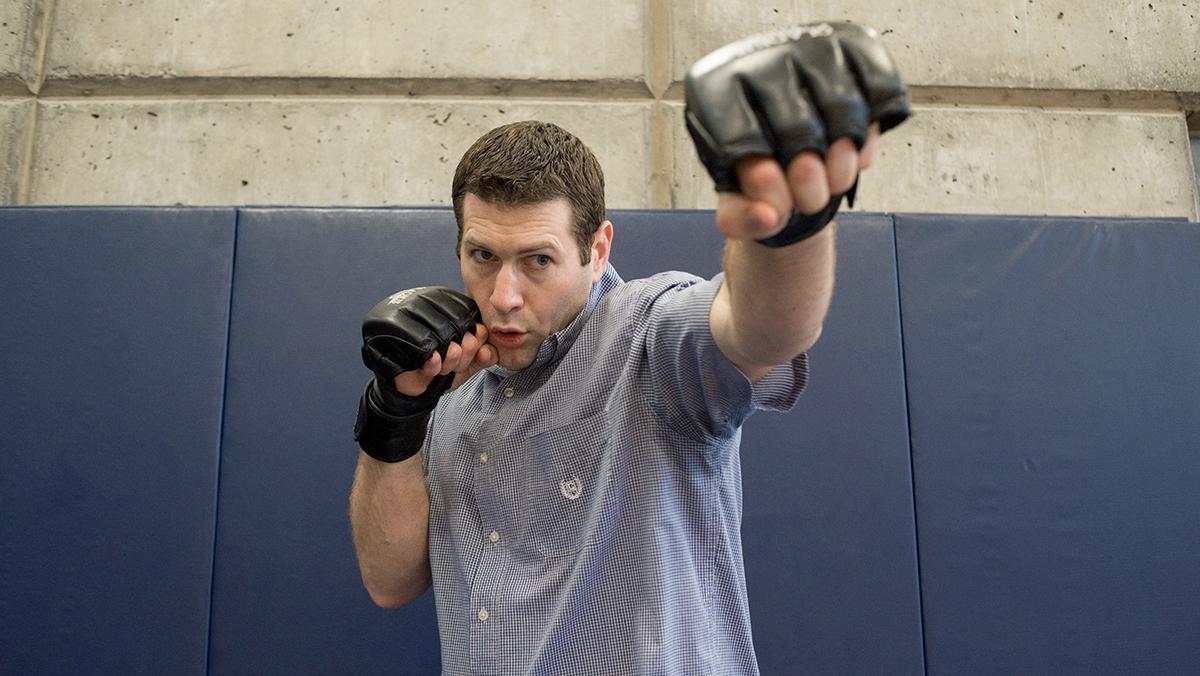 Fernando Ferraz/The Ithacan
James Pfrehm, assistant professor in the Department of Modern Languages and Literatures, wrote an article published in Inside Higher Ed about how cage fighting has reinvigorated his teaching.
By Sam Haut — Staff Writer
Published: March 5, 2017

For James Pfrehm, assistant professor in the Department of Modern Languages and Literatures, mixed martial arts is more than a hobby — it’s part of an academic philosophy.

Recently, Pfrehm wrote an article for Inside Higher Ed titled “Cage Fighting as a Way to Reinspire One’s Inner Academic.” In the article, published Feb. 14, Pfrehm details his journey in cage fighting, why an academic like himself took up the sport and the surprising similarities he has found between the two seemingly distant disciplines. Pfrehm wrote that cage fighting, like academia, is interdisciplinary — made up of boxing, muay Thai, taekwondo and jujitsu, among other forms of fighting. He also wrote about how he feels academics could learn from cage fighting. For example, his teammates always have his back, but he wrote that in academia, professors rarely read or offer feedback on their colleagues’ research or attend their conference presentations.

Staff Writer Sam Haut spoke with Pfrehm about the sport, its connection to academia and what he was able to discover over the course of his time in the ring.

Sam Haut: What made you pursue cage fighting as a hobby?

James Pfrehm: I always worked out and did some athletics in high school and college. I was just like, “What’s something that’s going to combine as many disciplines as possible and make me realize that I have to perform or there’s going to be a consequence.” I’ve never been a big street fighter, but what I do like about this is that it allows you to set free. You know the whole fight club thing, where you’re trapped in this society that’s telling you you can’t do these certain things, and all of a sudden when you get into a cage, you can just start swinging, you can let go and do things that you can’t do or you’ll get arrested. I kind of like that — I won’t lie. I kind of like that I get in there. … It’s just me and the other guy, and it comes down to the training and the reflexes and instincts, and also who’s willing to let go more. If somebody’s holding back, you’re going to win.

SH: Why did you feel the need to write the article?

JP: Because people look at me when I say I do MMA, and they say, “Why would you do that? You’re an academic. This seems antithetical to what you preach.” And I thought, well, there’s got to be something in MMA that reminds me of how much I love my job, not just that it’s the complete opposite. … There’s more to it than just punching. I also liked that the guys I was with were interested in me, just like I was interested in them. Like any academic, what we publish has been read by other people. So what I wanted was to show that there were definite academic nuances within the framework of cage fighting, and that…it’s not just two brutal guys knocking each other out. It is that, but it’s also more than that. It’s that they come to it as a philosophy, as a science, and as a discipline, and that discipline is multidisciplinary. So I wrote that as a declaration of why I do it and that it’s not just mindless brutality.

SH: Would you recommend this to other people?

JP: Yeah, I’d say everybody — everybody — should learn how to punch and how to kick and defend themselves. I think beyond your mind, and being able to verbally defend yourself and to convince other people, which I think is very important, because I’m a linguist, and I work in modern languages, so for me, the linguistic skills we take into the world are essential. But I think just as essential are the physical skills, and those include tapping back, reaching back into what our ancestors gave us, which is a sense of how to defend ourselves in an emergency. I think you owe it to yourself to know how to punch, how to defend yourself and how to kick.

SH: Have you seen other people take up hobbies to reinvigorate their passions?

JP: Yeah: brewing. I have a colleague who does a lot of beer brewing, and he approaches beer brewing very much [with] the same methodical, diligent way that he does teaching, and he has connected to other teachers through brewing. Everybody’s got to find their own passion, but it has to remind of how much you like your day job, like my colleague, who’s an excellent brewer, but he’s also an amazing teacher. I think he appreciates his job more knowing that, boy, it would take a lot to become a professional brewer.

SH: Has cage fighting changed the way you teach?

JP: A little bit. Think about it this way: Say you prepare for a PowerPoint presentation for your class. Doesn’t go well. The only real consequence you have is that you get a little bad grade, your feelings get hurt. Now imagine that you don’t prepare well for a fight. You don’t prepare well for a team practice. You don’t get injured, but you get beat up pretty bad. And so the consequences of not doing that are immediate and painful. So I started thinking I should put more into what I’m doing also for the classroom because it’s essentially the same. And I’ve always done a lot for the class. I’ve put a lot into my teaching. I’ve always put a lot into my students. But I just felt like the last two years, well, let me do something else and let’s see how that feels, and I realized I love my job, and I’m glad I’m never going to be a professional fighter because it’s that hard, and it makes you appreciate what you do have more.

MMA is a sport that is worth your eyes.

You need to see UFC