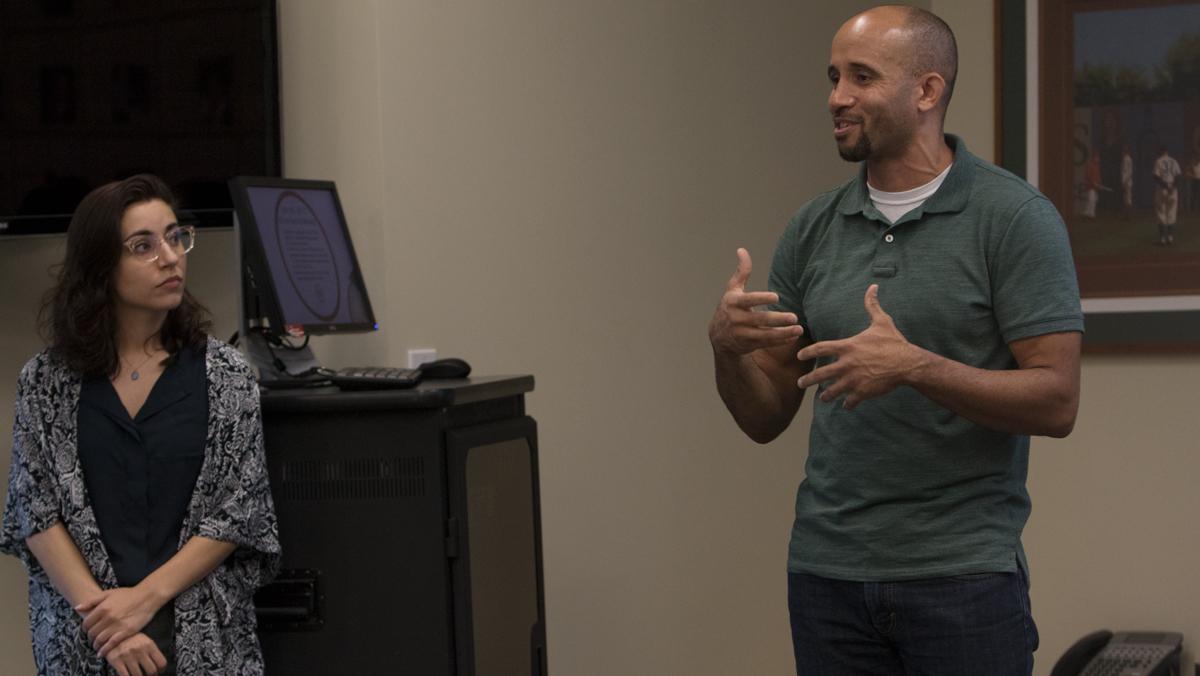 Maxine Hansford/ The Ithacan
Sarah Grunberg, lecturer in the Department of Sociology, and Derek Adams, assistant professor in the Department of English, present about intergroup dialogue to Faculty Council Sept. 5. They talked about implementing intergroup dialogue into classrooms and about upcoming workshops.
By Jessie Stelter — Contributing Writer
Published: October 31, 2017

Ithaca College has been in the process of implementing the educational model of intergroup dialogue into classes and workshops since Spring 2017.

Intergroup dialogue is an educational model that that brings together groups from different social identities and allows for open dialogue about difficult topics. The Center for Faculty Excellence hosted an Experiencing Intergroup Dialogue workshop for staff and faculty at the college Oct. 19 and 20.

The workshop was led by Kristie Ford, professor of sociology at Skidmore College and founder of Skidmore’s Intergroup Relations Program (IGR), and Charles Behling, former professor of psychology at University of Michigan and co-director of the university’s IGR. The goal of the workshop was to educate attendees about the concept of intergroup dialogue as an educational model and how faculty and staff can incorporate its principles into their teachings and interactions with students inside and outside the classroom.

Behling said the model is especially important in the context of higher education because many students come from homogenous communities and are not used to being surrounded by diversity.

“[Students] don’t have the skills to understand and know how to communicate through cultural differences and how to reap the benefits of diversity,” Behling said.

Sarah Grunberg, lecturer in the Department of Sociology, along with Derek Adams, assistant professor in the Department of English, organized the event. Grunberg and Adams co-taught the sociology department’s first-ever course titled Intergroup Dialogue on Race and Ethnicity. Grunberg said it had been something they thought would benefit the college, and they brought it up to President Shirley M. Collado, who supported the idea. Grunberg and Adams said they found the class to be a success and that it was eye–opening for everyone involved. Grunberg said they wanted to educate other faculty on the importance of intergroup dialogue.

The workshop consisted of experiential exercises for faculty and staff, including small group discussions about their own experiences and social identities. The goal of the workshop was for participants to learn how to facilitate open dialogue for students about issues surrounding themes like race, gender identity and sexuality. In order to be trained in these intergroup dialogue techniques, faculty and staff must experience it themselves, Grunberg said.

The model itself began at the University of Michigan. It is a 29-year-old program that has gained recognition and has influenced the implementation of the educational model in universities across the United States.

Behling said the “The Michigan Model” was the first program to develop the philosophy and techniques of intergroup dialogue, and the University of Michigan’s Program on Intergroup Relations has presented this model to over 120 institutions.

The college has been added to this list in its attempt to integrate the model’s techniques and principles into all kinds of classrooms. The college has shown interest in creating more classes specifically revolving around intergroup dialogue, with the main purpose of facilitating this kind of dialogue.

The workshop mirrors the pedagogy of this program, and takes faculty and staff through the different stages of dialogue themselves, Ford said.

The principles and techniques of intergroup dialogue can be applied to fields outside of sociology and psychology classes, as social inequity can be seen across fields, Adams said.

“Every discipline has an opportunity to engage their students in intergroup dialogue, that’s going to be helpful when addressing the very things that plague their units,” he said.

Jennifer Spitzer, assistant professor in the Department of English, attended the workshop. She said she wanted to know how to best engage in honest and productive discussions about power and privilege, race, gender, sexual orientation, class, ethnicity and ability.

“As a white cisgender middle-class woman who has benefitted from enormous privilege, I want to be able to challenge my own presumptions and prejudices and engage in more meaningful and self-aware conversation with my students,” Spitzer said.

Sophomore Clare Nowalk took Grunberg and Adams’ Intergroup Dialogue on Race and Ethnicity course, which the workshop was derived from. She said experiencing intergroup dialogue firsthand is necessary and important but said it can be overwhelming and come with a lot of emotional baggage.

“There were so many times I just went home and cried after that class,” she said. “I was just so impacted by other people’s experiences.”

Junior Kylee Roberts also took the course and said she was interested in the concept of intergroup dialogue because she wanted to become more aware of others’ experiences and privileges.

“I’m a black woman and wanted to explore my social identity more because that is something I hadn’t really figured out coming into the course, and I felt like I wanted an outlet to compare my life experience with others’,” Roberts said.

Grunberg said the college needs to find as many ways as possible to further encourage a culture that enables open dialogue about difficult experiences. Grunberg said that especially given what is happening in the national context, people are starting to have these larger conversations about race, and that it is important to have this dialogue in a higher education environment. The first step to embrace diversity is to discuss the difficulties of different social identities, Grunberg said.

“The more we can support each other in that process, the better we can come together when we face bigger problems as a campus community,” Grunberg said.

The “What is Disability?” presentation used statistics, history, law and other areas to explore different views and definitions of disability.