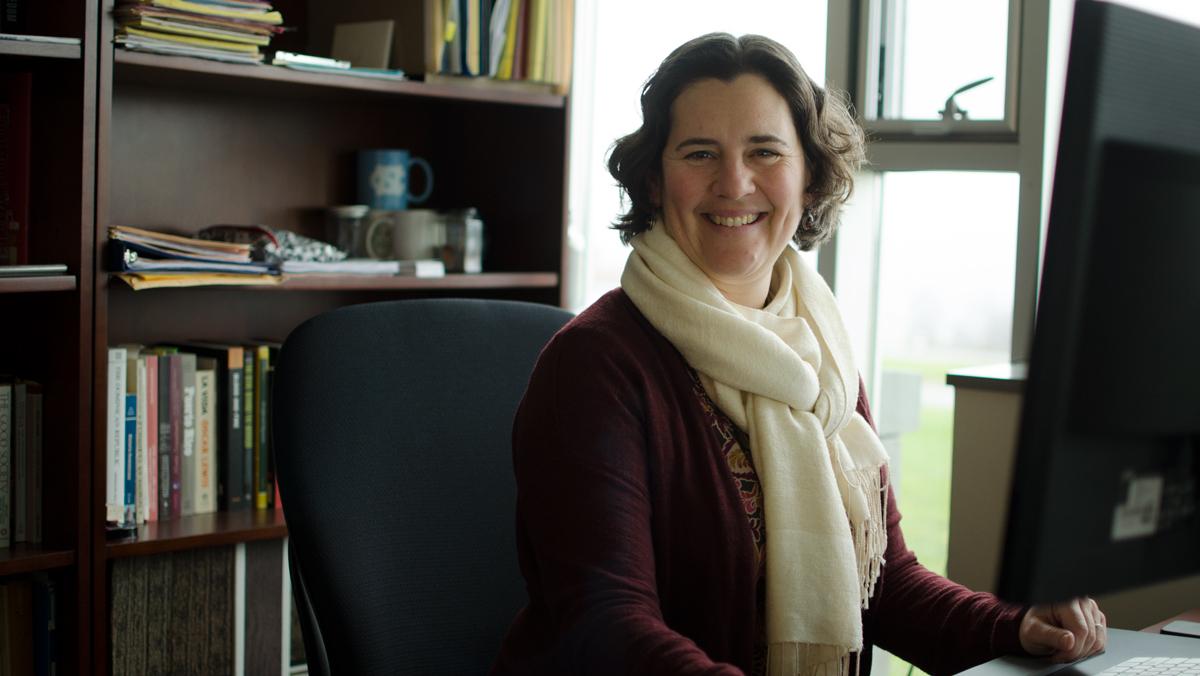 Kristen Harrison/ The Ithacan
Alicia Swords, associate professor of sociology and director of the honors program at Ithaca College, uses progressive stacking in her classroom. Progressive stacking is a technique used by group facilitators to ensure minority voices are heard by allowing members of minority communities to speak before members of majority communities.
By Brontë Cook — Staff Writer
Published: November 15, 2017

In efforts to achieve diversity and equity at institutions of higher education, educators across the country have begun to introduce “progressive stacking” into their classrooms.

Progressive stacking is a technique used by group facilitators to ensure minority voices are heard by allowing members of minority communities to speak before members of majority communities, Nolan Cabrera, associate professor of educational policy studies and practice at the University of Arizona, said. Underrepresented groups can include women, people of color, members of the LGBTQ community and individuals with mental or physical disabilities.

Alicia Swords, associate professor of sociology and director of the honors program at Ithaca College, said she uses the technique by calling on students whose voices she feels are crucial to the context of the conversation. She calls on these students because of their personal or cultural identities and experiences in order to recognize and combat unbalanced power dynamics in her classroom.

“When I see students in a room, and white students are very eager to raise their hands, I use progressive stacking,” Swords said. “I think that’s a measure that allows us to, in the micropolitics of the classroom, be thoughtful about how we’re treating people and how we’re creating opportunities and noticing power in the classroom.”

While Swords consistently uses progressive stacking in the classroom, she said she does not always tell her students when she uses it.

“Sometimes, depending on the contexts, I simply just call on people or use my own criteria to decide who to call on first when there are multiple hands raised,” Swords said.

Junior Julissa Martinez said Swords’ use of progressive stacking in the classroom allowed space for members of marginalized communities, including herself, to feel comfortable sharing their own stories and experiences. She said this is the best technique that she has seen used on this campus in a classroom to allow marginalized voices to be heard.

“What I had to share, she validated that,” Martinez said. “She puts our voices first in a space where we felt like our voices were never even heard.”

Martinez also said while this technique may not provide the same comfort for students who come from a place of privilege, it allows those students to gain an understanding of their peers’ experiences.

“If they feel that discomfort in one class, imagine how we feel on a day to day basis in almost all of our classes,” she said.

This technique recently gained national attention after Stephanie McKellop, Ph.D. student and teaching assistant at the University of Pennsylvania, posted about their use of the method on their personal Twitter account Oct. 16.

“I will always call on my black women students first,” McKellop tweeted. “Other POC get second–tier priority. [White women] come next. And, if I have to, white men.”

McKellop received both support and criticism for her tweet. While some Twitter users praised her use of progressive stacking, some accused her of being discriminatory against whites and men because of her desire to call on black women before white men.

Cabrera said he believes these negative responses are a way for those who benefit from oppressive systems to channel their outrage.

“When privilege is normal in your life, equity feels like oppression — that’s the epitome of what we’re talking about here,” Cabrera said.

Senior Claudia Hart, a student in Swords’ Social Change class last semester, said that while she was not aware of Swords’ use of progressive stacking, she did recognize the classroom’s extremely inclusive environment.

Swords also said recognizing the historical context of discrimination is crucial to analyzing and improving spaces of higher education, since the power in a classroom is representative of society.

“When I teach students about historical inequality, I think it’s really important to model that in the classroom and use the opportunities that I can to particularly invite participation from members of historically disadvantaged groups,” Swords said.

Cabrera said one of the biggest misconceptions about progressive stacking is that it aims to silence members of majority communities, particularly white men, because it encourages that specific demographic to listen rather than speak. He said if people feel that they are being silenced by making space for other people, they should consider that they may be taking up too much space in the environment.

“White men are still going to be able to talk in class, we just need them to talk a little less and to listen a little more,” Cabrera said.

Freshman Philip Thompson said he believes it is important to encourage voices that are not typically heard, but that he does not necessarily agree with the way McKellop used the technique.

“I don’t think it’s good to have anyone’s voice shut down, including white men — I just don’t know if it’s always going to be beneficial to everyone,” Thompson said. “But I think the voices that are heard less should definitely be heard more.”

Sean Eversley Bradwell, director of programs and outreach at the college, said that what these conversations are missing is a deeper understanding of inclusivity in the classroom.

“I think, often times, what we miss is that this is not just a conversation about people’s preference for calling on students in class,” Bradwell said.

While Bradwell does not use progressive stacking in his own classroom, he said he believes it is important for professors to create relationships with their students and to recognize when voices are not being heard. He said creating space for inclusive conversations in the classroom allows for a richer educational experience.

Freshman Thomas Gonzalez said while he does not agree with the concept of calling on someone first because of their physically perceivable attributes, such as race or gender, he said he believes much can be learned by hearing from people with a variety of backgrounds.

“I think that when we talk about diversity, there’s diversity of skin color, but there’s also diversity of thought and background,” Gonzalez said.

Swords said she believes progressive stacking positively benefits not only members of marginalized communities, but all students in the classroom.

“It’s not about somebody else being called on unfairly,” Swords said. “When I call on someone, it’s often because I know that there’s something everyone can learn from hearing them speak.”