Proposed Master Plan to include expansion of campus 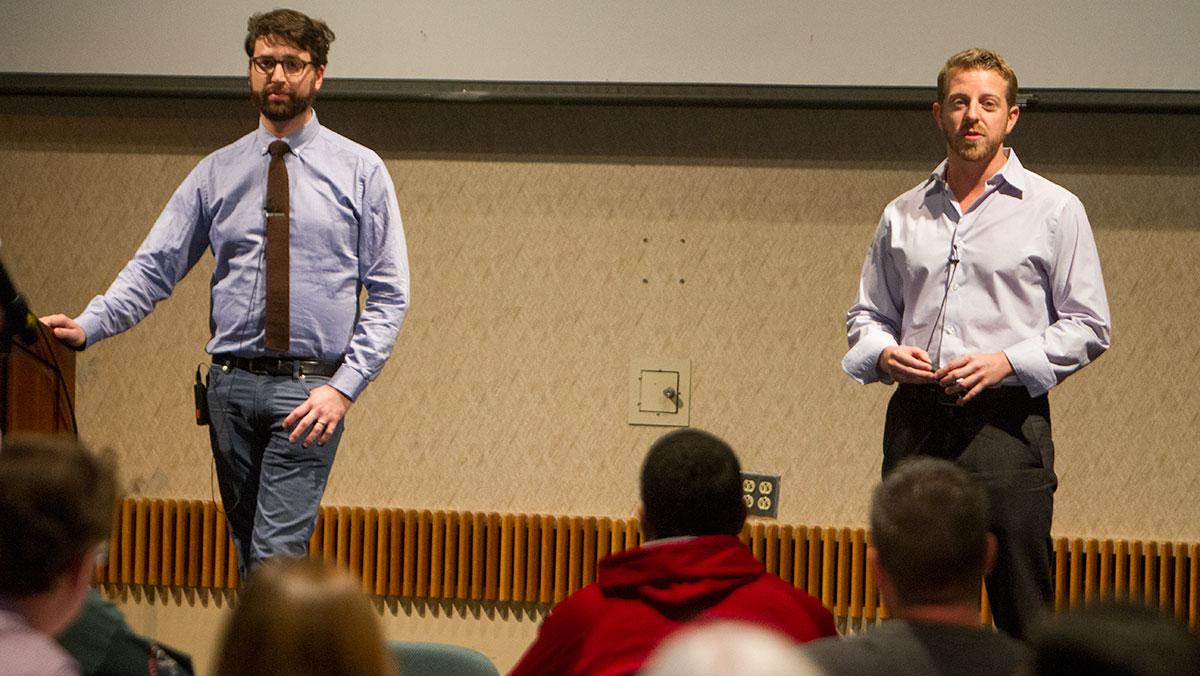 Proposed elements that could be included in the next Ithaca College Master Plan would remove some buildings, add new ones and connect already existing structures.

A draft for the long-term renovation and expansion of Ithaca College’s campus has been proposed based on the feedback that has been received by students, faculty and staff about what they would like to see in the future.

Josh Jackson and David Levo, both architects from the Perkins Eastman firm working with the Master Plan Committee, presented their ideas about all of the changes they plan to propose to the administration during two Town Hall meetings on Dec. 4 in Emerson Suites.

The Master Plan Committee held its first Town Hall meetings on Oct. 7 to gather feedback from the campus community on areas of praise and improvement and what students would envision the campus to look like in the next 10–20 years. While the proposals, drafted from the sum total of these responses and other focus groups are not finalized, Gerald Hector, vice president of finance and administration, said the committee has begun its cost estimation analyses with the firm as of Dec. 10.

Hector said the last Master Plan was made in 2002, out of which came the Athletics and Events Center and the renovations to the Whalen School of Music.

Jackson said one of the main goals of the current proposal is to help students acclimate to the campus during all four seasons. In order to help achieve this goal, Levo said, one of the proposed changes is the addition of a second walkway connecting the Center for Health Sciences, the north side of the Hill Center, the James J. Whalen Center for Music and the open space on the bottom floor of the library.

Jackson said another important goal is to support creativity through interdisciplinary collaboration. To support this, Levo said, the removal of the upper and lower quads and the addition of academic labs in their place was an option because they would provide students across majors with areas to work together on any sort of project. He said these labs would not be associated with any particular buildings or programs on campus.

Hector said in conversations about the hypothetical removal of residence halls, there are many avenues to consider with temporary housing and creating potentially more modern residential buildings.

To better use already open spaces, the two proposed an amphitheater in the area just above the Dillingham Center fountain and below the Hill Center. The area right now consists of flat rocks, but the addition of an amphitheater would allow for an area with big steps where students could relax and interact, he said. In addition, he said this would also allow for more connectivity between the Hill Center and Dillingham.

One of the final major changes proposed was to open a new main entrance further down Danby Road, toward downtown. The parking lot near Yavits Field would be removed and the entrance would run through there, but the current entrance would not be eliminated. Levo said this new entrance would allow people entering the college to get a better view of the pastoral foreground, and it would provide a more transformative experience for first-time visitors.

“One of the first things is to reinforce and strengthen the sense of place that this campus has,” Levo said. “It has tremendous views, tremendous character. The ecology of the finger lakes is really expressed very well here on South Hill, and finally, to maintain that sense of place is very important.”

The architects also proposed minor changes to the layout of the natural lands to accommodate for more recreational activities, especially winter activities like cross-country skiing and snowshoeing.

Tim Carey, associate vice president in the Office of Facilities, said the recent proposals will be the base framework for the finalization of the Master Plan, which should be completed during the Spring 2015 semester. Carey said it will provide a series of guiding principles for the college to follow during the next 10­–20 years.

“The advantage of approaching the Master Plan in this way is that the components can be viewed as if one were looking at a menu,” Carey said. “Certain items can be chosen, while others might be delayed until the near future — or even far into the future.”

Hector said the college’s standpoint for determining the likelihood of these proposals being fulfilled will be based on what the pressing needs are for the institution, such as the primary physical and programmatic needs. The finalized plan of action, he said, will address both deferred maintenance projects and the projects the college chooses to feasibly pursue from these proposals.

Carey said the cost so far is unknown, but cost estimates will continue to be gathered during the coming months with the help of a professional firm that specializes in this component of the process.

Levo said students, staff and faculty are welcome to continue sending input and suggestions to masterplanning@ithaca.edu.