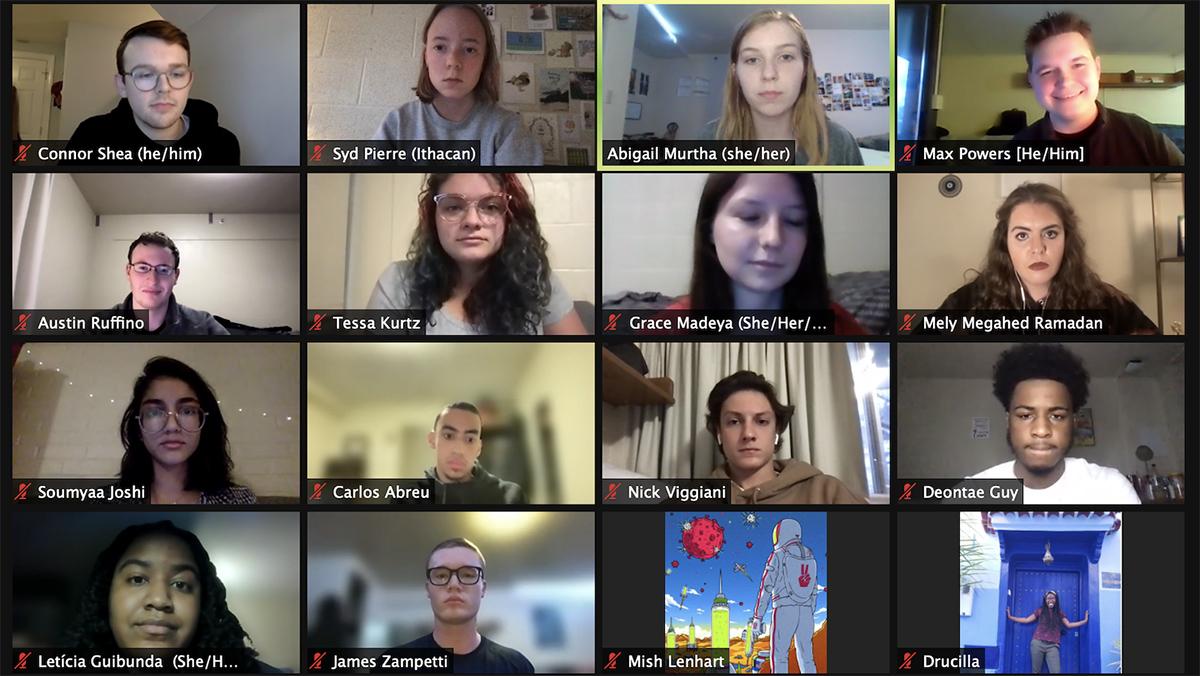 Courtesy of the Student Governance Council
One executive board presented its platform and seven students ran for positions in the SGC senate at the platform presentations. ICRevival is the only group running for the incoming SGC executive board.
By Syd Pierre — Staff Writer
Published: April 13, 2021

The Ithaca College Student Governance Council (SGC) held platform presentations April 12 for the prospective SGC executive board and senate for the 2021–22 academic year.

Guy said the mission of the board is to revive the campus and to listen to students’ needs and voices.

Zampetti said he wants to connect the student body to departments and committees that are lacking student perspectives.

“If this year has taught us anything, it’s that student voices are so important when major decisions are being made, especially when those decisions directly impact us, the most notable being the lack of student representation in the [Academic Program Prioritization] process,” Zampetti said.

Guibunda said she wants to find more creative ways for the Senior Leadership Team (SLT) and student populations to engage.

“I think it’s really essential for us to be flexible and find different mixtures of virtual events and in-person events that allows not only students to go to different Senior Leadership Team members and reach out to them, but to have those members also be able to come to areas that are centered on students spaces to connect with students on places they’re more comfortable with,” she said.

“A bereavement policy would ensure that students are not penalized for taking time off to grieve, recognizing that students also go through difficult times and hardships,” Abreu said.

Megahed Ramadan said she wants to focus on financial transparency at the college.

“We’d like to make the business and financial presentations that are held by Ithaca College as accessible as possible,” Megahed Ramadan said. “Both based on timing, like when the meetings are, and language.”

Sophomore Grace Madeya, current vice president of business and finance, is running for Class of 2023 senator. She said she wants to increase SGC’s outreach for the campus community, advocate for mental health awareness and make on-campus jobs more accessible for students.

Freshman Nick Viggiani is running for the Class of 2024 senator. He said he wants to focus on spreading awareness of mental health for students and making sure the transition to Fall 2021 goes smoothly.

Sophomore Tessa Kurtz, current HSHP senator, is re-running for the position. Kurtz said she wanted to focus on accessibility within the School of HSHP and on campus as a whole.

Sophomore Soumyaa Joshi, current vice president of academic affairs, is running for the School of H&S senator. Joshi said she wanted to create a Dean’s Student Council within H&S and continue her involvement in the Academic Policy Committee (APC) and Integrative Core Curriculum (ICC) Taskforce. She said she also wanted to continue voicing student concerns to the administration and advocate for student involvement in campus-wide decisions.

Junior Max Powers, current senator-at-large, is re-running for the same position. Powers said he wants to increase accessibility on campus. He also said he wants to provide more resources for students to learn about the SGC and other student organizations.

Sophomore Austin Ruffino, current senator-at-large, is re-running for the same position. Ruffino said he wanted to make the SGC as accessible as possible through restructuring the SGC Constitution and the SGC website. Ruffino also said he wanted to improve the communication and collaboration between the SGC and the SLT.

Sophomore Lila Wieser, current senator-at-large, is re-running for the same position. She was unable to make it to the platform presentations, but a video of her presentation was played. Wieser said she wanted to focus on environmental sustainability on campus and passing legislation to encourage a culture of community on campus.

SGC elections for the incoming executive board and senate will be held from April 23 to 24 on IC Engage. In Fall 2021 there will be another election for positions that are not filled in Spring 2021.