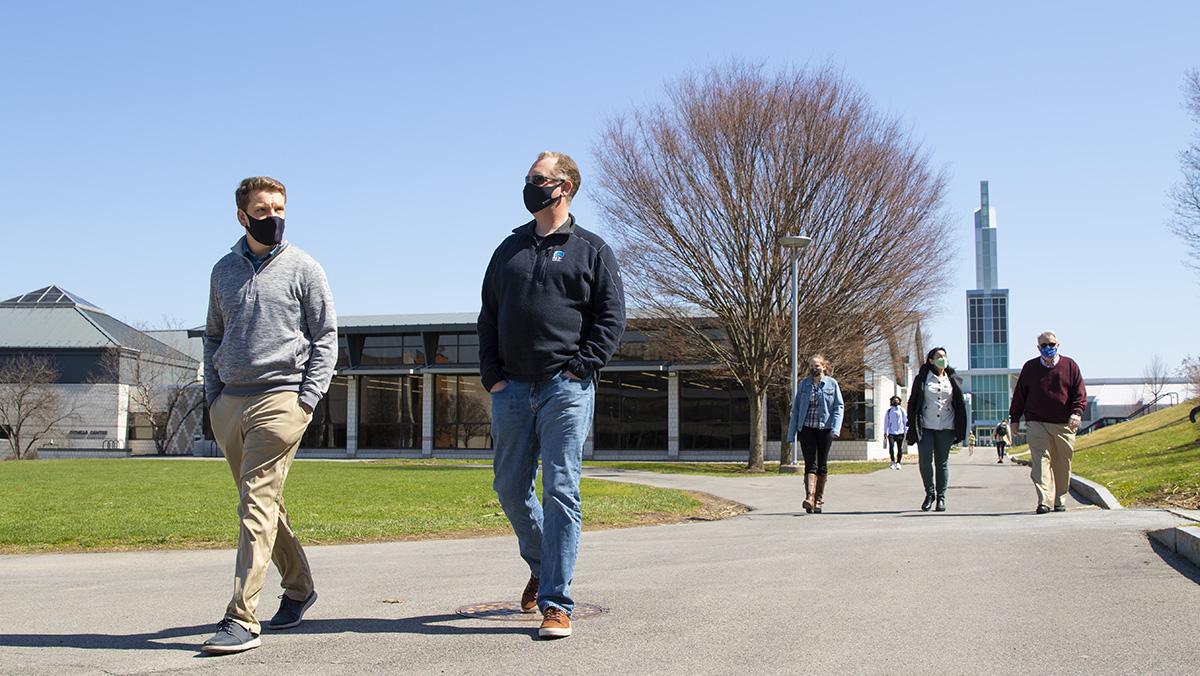 Ash Bailot/The Ithacan
The Office of Admissions has discouraged prospective students and their families from visiting the campus. The college stated in its “Return to Campus” plan that the campus is open only to students, faculty and staff.
By Syd Pierre — Staff Writer
Published: April 8, 2021

The Academic Program Prioritization (APP) at Ithaca College has resulted in the elimination of 116 full-time equivalent faculty positions along with other departments, programs and majors. Some prospective students have concerns about the effects of the cuts, while others feel the cuts will not have an impact on their futures at the college.

Andrew Herrick, a senior at Mechanicville High School in Mechanicville, New York, said he was worried about the example the college is setting.

“I’m just concerned, mostly about the fact that if they can cut faculty now from whatever programs that they choose [and] even though it might not be affecting me specifically right now, if they established as a precedent that they can do this, in the future, they may choose to cut faculty where it does affect me,” Herrick said.

Herrick, who plans to double major in music education and euphonium performance, said that while the college was his first choice and he committed in February, he spent time considering other options after learning about the faculty and program cuts.

“I already applied early decision,” Herrick said. “So, what does that leave me the opportunity to do? So, it kind of puts me in a position where I’m kind of stuck, for lack of a better word. But I will add, at the end of the day, I think I made the right decision to commit.”

“We anticipate students will take more time than usual with their decisions, and there could also be a lot of wait list activity at colleges with stronger market positions that may impact our numbers,” Koehler said via email.

The deadline to commit to the college was extended from May 1 to June 1 in 2020.

Nicole Eversley Bradwell, executive director of admission, said the college has communicated its plans for phasing out programs that will be cut with the students who are currently in the applicant pool for those programs. The Class of 2025 will be the final class admitted to programs that are slated to be cut.

“People had some follow–up questions, like, ‘Will this impact my experience?’” she said. “But we haven’t heard people angered by that. … These are things that happen all the time. What’s different this time is that it was so public. When we do one or two programs that transition a year, it’s not on the front of anybody’s paper.”

The APP process has received national coverage from InsideHigherEd, The Chronicle of Higher Education, The New York Times and Forbes.

Lily Milkis, a senior at Walter Panas High School in Cortlandt Manor, New York, said she applied early decision to the college and committed in December 2020.

She plans to major in music education and said that she had limited concerns about the faculty and program cuts because they did not impact her major but that she would have preferred to see the administration be more open about the situation.

“I heard from my friends and people just posting on social media that there was a lack of transparency about the whole process, and that the administration didn’t do a great job listening when the students spoke up about it,” Milkis said. “So I think I would have liked to have seen more transparency from them. And also, dealing with the students in a different way than just saying, ‘No, we’re doing this.’”

Emma Rubenstein, a senior at Yorktown High School in Yorktown Heights, New York, said she committed to the college in January as a Communication Management and Design major.

She said she applied to the college early action, and, because her major was not being affected, she was not worried about the impacts of the APP process. She said that if the CMD major was getting cut, she would still stay at the college.

“If they did cut it, yeah, I would probably be a little upset,” she said. “But I don’t think it would cause me to transfer schools.”

Sena Namkung, a senior at Tappan Zee High School in Orangeburg, New York, has been accepted to the college and is waiting to commit until she receives her financial aid package.

She said she has concerns about the projected student population of 5,000 — a recommendation in the final draft.

“It’s just a matter of, will I have the resources that I believed I would have before, as I go into the college?” Namkung asked. “Because there’s such a high volume of cuts, that has been an area of concern for me. It’s not a huge concern, but it is still there. And I know that’s the same for people that I have been talking to that are planning to commit also.”

Matthew Minton is a senior at Quince Orchard High School in Gaithersburg, Maryland. Minton said he has been accepted to the college but is waiting to hear back about financial aid.

“I don’t know how much [the cuts] will impact my final decision,” Minton said. “But I don’t think it’s going to be the one deciding factor between one school and another. But I do think it’s something to think about when I’m deciding where to go.”

Hannah Hughes, a senior at Ballston Spa High School in Ballston Spa, New York, applied to the college and was accepted but decided to attend Emerson College in Boston, Massachusetts, instead.

She said she discussed the cuts with her parents and a friend who currently attends the college.

“It’s definitely not something that made me want to choose Ithaca as a school,” Hughes said. “But I wasn’t fully aware of it at my time of acceptance or necessarily 100% aware of it when I was trying to pick a school.”

Jenny Rickard, president and CEO of the Common App, said in a March 9 letter that Common App applications increased in 2020–21 compared to 2019–20.

Koehler said the college is anticipating a similar admissions rate for Fall 2021 and is working on outreach to interested students and yielding accepted students.

Koehler said the college is working on keeping accepted students interested and engaged over the summer with one-credit seminars for incoming freshmen.

“[Even with] the level of engagement we will have with students over the course of the summer, even after they’ve told us yes, we cannot bank on any of those students actually following through for all sorts of reasons,” Koehler said.

Junior Marley Schwarz said she has been working as a President’s Host tour guide at the college since Spring 2019. She said that in past years, she gave two to three campus tours a week to prospective students, but all of the admissions events this year have been virtual.

The Office of Admission has discouraged prospective students and their families from visiting the campus. The college stated in its “Return to Campus” plan that the campus is open only to students, faculty and staff. As of April 1, asymptomatic travelers from outside of New York state are no longer required to quarantine or test prior to entering the state, according to the Department of Health.

Dave Maley, director of public relations, said the college has noticed an increase of visitors on campus. He said teams from the Office of Admission and the Office of Facilities have worked to communicate with visitors.

Signs have been placed in front of buildings reminding visitors that the buildings are only open to current students and employees and encouraging visitors to contact the Office of Admission for virtual touring options.

“This is a key time for students to make decisions about college enrollment, and we know that admitted students, especially those who have never visited campus before, are eager to physically see and experience the campus,” Maley said via email.

Schwarz said she thinks it has been tough to be a representative of the college this year because of the college’s response to the COVID-19 pandemic and the cuts.

She said she takes the opportunity to talk about how the campus community has responded to the APP process, like Open the Books and the Alumni Against Austerity groups — two groups that have been actively opposed to the cuts.

“You always try to be honest with your prospective students, but this takes honesty to a new level,” Schwarz said. “I’m not ashamed to talk about it when people bring it up or if I’m the one bringing it up because it’s part of where we are right now.”