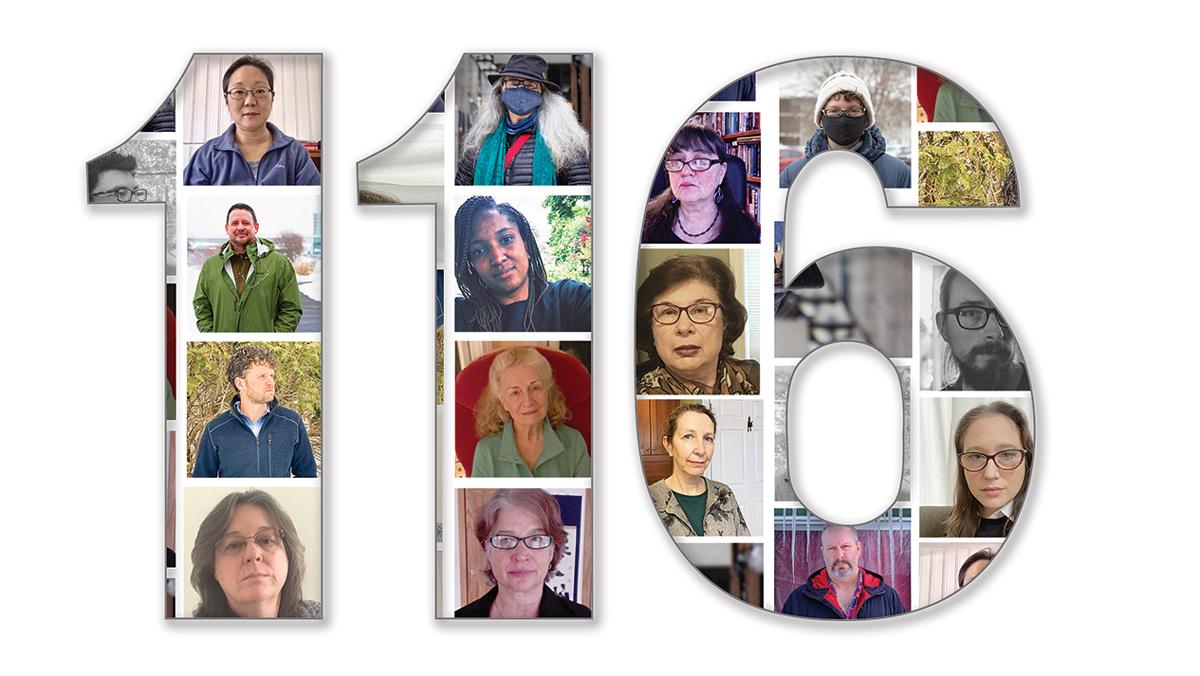 Kate Wolfel/The Ithacan
The Academic Program Prioritization Implementation Committee (APPIC) released its final recommendations for the APP in the “Shape of the College” document Feb. 18. The final recommendations, like the draft document, recommend the elimination of 116 FTE faculty positions and 26 departments, programs and majors.
By Alexis Manore — News Editor
Published: February 25, 2021

On the night of Feb. 24, approximately 75 students gathered and placed candles on the steps of the Ithaca College Library to honor the faculty members who will lose their jobs as a result of the Academic Program Prioritization (APP) process. Earlier that day, President Shirley M. Collado and La Jerne Cornish, provost and senior vice president for academic affairs, approved the recommended elimination of 116 full-time equivalent (FTE) faculty positions.

The Academic Program Prioritization Implementation Committee (APPIC) released its final recommendations for the APP in the “Shape of the College” document Feb. 18. The final recommendations, like the draft document, recommend the elimination of 116 FTE faculty positions and 26 departments, programs and majors. 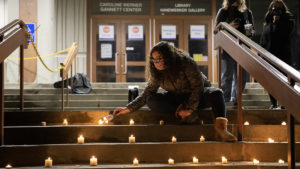 Colleges all over the United States have been making cuts to faculty and staff positions due to decreased enrollment and financial issues exacerbated by the COVID-19 pandemic. Marquette University in Milwaukee, Wisconsin, received backlash from faculty and students for its decision to eliminate 39 positions. The University of Akron in Akron, Ohio, cut 178 employees, including 96 unionized faculty members and 60 staff members.

Robert Kelchen, associate professor of higher education and chair of the Department of Education Leadership Management and Policy at Seton Hall University, said colleges are making cuts in part because of the COVID-19 pandemic but also because of concerns about finances.

“[Ithaca College’s plan] is one of the most aggressive cuts I’ve seen in the country,” he said.

In a Feb. 24 email to the college community, Collado and Cornish said the changes will occur over the next three academic years.

“Transformative change is difficult and frequently personal, and we understand that the changes to come for our academic programs and the changes that have already happened in our nonacademic programs profoundly affect the lives of our colleagues, friends, students and alumni,” they wrote in the email. “We have made our decisions with the full weight of this understanding and with the knowledge that we must find a sustainable size and an appropriate equilibrium that ensures the continuation of this institution and its ability to serve our students and our community in perpetuity.”

Collado and Cornish did not have more to say to The Ithacan after the release of the email.

David Lissy, chair of the Ithaca College Board of Trustees, and Jim Nolan, vice chair of the board, also sent an email to the campus community stating that the board voted to support the decision to accept the “Shape of the College” recommendations.

“Recalibrating the size of the college is an important goal of the Ithaca Forever strategic plan and is critical to ensuring the college’s commitment to maintaining student access and affordability, and to providing an environment that fosters academic success, equity and inclusion, and an enriching experience,” the email stated. “We recognize this cannot happen if the college does not make proactive and necessary decisions right now in order to invest in and secure our future. We are confident about the path forward and must stay the course of our strategic plan.”

In a Feb. 24 All-Staff Meeting, Brad Hougham, associate provost for faculty affairs and co-chair of the APPIC, said the APPIC proposed the minimum possible FTE eliminations in the draft document, so reducing the numbers further was not possible.

He said the lack of changes is not because the APPIC did not listen to the feedback.

“This is not because the feedback was not considered or wasn’t sincerely requested,” Hougham said.

The “Shape of the College” document states that the APPIC decided to protect tenured and tenure-eligible positions. If a department has no part-time or NTEN positions, then it would not have eliminations. However, if a department does have part-time or NTEN positions, that does not mean that it would suffer eliminations. The document states that the APPIC examined each department in which cuts could be made and analyzed data supplied by departments by the data dashboard, size, student-to-faculty ratio, staffing and curricular needs.

College community members have been concerned about the APP process, specifically the lack of shared governance, the speed of the process and the lack of financial transparency.

In a Feb. 24 statement, the Open the Books coalition expressed its frustration with the approval of the plan. The coalition stated that even though the plan has been approved, it is still working to stop the cuts and push for shared governance and financial transparency.

“We could be wrong,” the coalition said in the statement. “Heartless layoffs could be the only way to ‘save Ithaca College.’ But how would we ever know without a real, inclusive, non-hierarchical reconsideration of the APP process where ALL community members are equally and thoroughly consulted? How will we know without a clear, complete outline of Ithaca College’s past, current and future finances? How will we know if we’re categorically shut out?”

Hundreds of alumni have joined the group “IC Alumni Against Austerity,” which is working to encourage alumni to take action against the cuts. The board of trustees and the Alumni Board of Directors are scheduled to meet with alumni to share information about the cuts and hear their thoughts March 1. Alumni in the group pushed to hold the event before the recommendations were approved, but this will not be happening as the plan has since been approved.

Samantha Wolfe ’11 said she is disheartened to hear that the college is cutting faculty positions, especially those in the School of Humanities and Sciences, because she majored in sociology during her time at the college.

“The top-down and dismissive approach of the APP does not reflect the spirit of my alma mater,” Wolfe said via email. “Ithaca College is where I first learned about and practiced participatory governance, coalition building and the importance of those most affected leading change efforts — none of which appear to have been part of this plan, despite what the Senior Leadership Team has claimed.”

Some faculty members have also come together to create an American Association of University Professors (AAUP) chapter to fight the cuts, push for shared governance and advocate for academic freedom. Dan Breen, associate professor in the Department of English and president of the IC AAUP chapter, said it has not yet been formally recognized by the national AAUP organization but is hoping to be recognized at the next AAUP Council, which will be March 20.

The chapter circulated a petition that called for the rejection of the draft recommendations, increased faculty participation in the process, delay of the timeline for the cuts and increased financial transparency. The petition has approximately 319 signatures.

Breen said the administration has yet to recognize the petition.

“The response of the college community hasn’t been appreciated as fully as it should be,” he said.

Breen said the chapter is communicating with the national AAUP organization to figure out its next steps.

Collado and Cornish have repeatedly said the cuts are a part of the strategic plan, Ithaca Forever, which had to be accelerated because of the COVID-19 pandemic’s effects on the college’s finances.

Jenna Mortenson ’19, former vice president for campus affairs for the Student Governance Council (SGC), said she was familiar with the strategic plan from her time as a student but thinks that it is being implemented at a faster pace and more extensively than she expected. She said some of the important documents, like the draft “Shape of the College” document, were unavailable to alumni, which she found frustrating.

“I love Ithaca, and I’m happy to sing its praises to everybody, and I loved my experience there,” she said. “I think it felt a little jarring to put so much time in and see that certain recommendations and data weren’t available to a whole population of the IC community.”

She said that as an alum, she is devastated to see that some of the professors who mean a lot to her are being terminated. She said her biggest concern is the lack of financial transparency.

Zack Ford ’07, former president of the Student Government Association, now known as the Student Governance Council, and secretary of the Alumni Association Board of Directors, said that no one wants to lose faculty members and programs but that the college urgently needs to make change.

“It’s important not to turn objections to this proposal to negative feedback that hurts the college,” he said. “It’s true that this is painful and simultaneously true that it’s good for the college.”

On Feb. 23, the American Political Science Association wrote a letter to Collado and Cornish that opposed the terminations of Alex Moon and Juan Arroyo, assistant professors in the Department of Politics.

“The termination of employment for Drs. Alex Moon and Juan Arroyo would severely undercut both the department’s capacity to provide introductory education on U.S. Politics but also conflict the college’s commitment to fostering a community that can ‘provide all community members with opportunities to develop, debate and critically evaluate strategies to address complex problems,’” the letter stated.

Senior Jordan Stecker said he thinks the APP process was a holistic process, and his focus is on helping the faculty members who will be affected by the APP process.

“I look forward to the changes that are going to be happening for our institution,” Stecker said. “I think for a very long time, there have been issues with dealing with finances and enrollment, and I think based on the way things are planned out, there’s a potential positive note that we can look forward to.”

Sophomore Clare Martin said they felt like the administration dismissed student concerns with its decision.

“They’ve decorated this email with so much fluff language, they’re putting so much emphasis on using ‘our,’ and ‘community,’ and it just feels like they’re trying to avoid the anger that’s going to come from the students they’re so blatantly ignoring,” Martin said. “The fact that the plan that’s going to cut so much is called ‘Ithaca Forever’ is the biggest joke I’ve ever heard.”

Sophomore Em Reynolds said they were not surprised that the administration accepted the recommendations.

“They don’t really care about what the entire campus community has to say,” Reynolds said. “The email basically says point–blank, ‘We hear you, we see you and we’re accepting these cuts in full in the middle of a pandemic anyway.’”

Junior Brady Lynch said she was sad to hear about the finalized cuts.

“There’s no going back,” Lynch said. “I just think it’s really upsetting because I feel like people have been trying to put stops towards this to end up happening, and now it’s official.”

“It’s heartbreaking because we all thought [the college] was going to be a place where we would find community and build community and connect with others,” Swensen said. “But now those connections are all being torn apart in the name of money.”