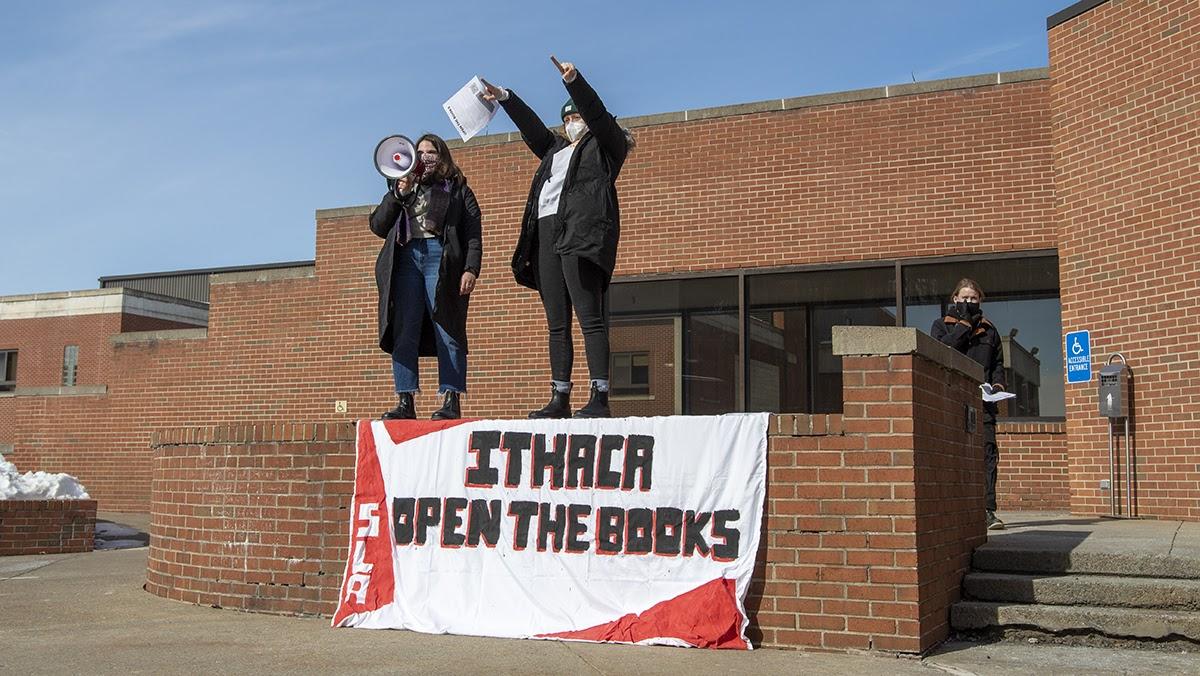 As Ithaca College faculty, staff, students and administrators arrived on campus for the start of in-person classes Feb. 8, they were met with signs and a chorus of chants like, “Tuition is high. Pay is low. Where does all the money go?” and “Stop with this hypocrisy. Labor is democracy.”

The Open the Books Coalition organized the protest against the proposed faculty and program cuts that are part of the Academic Program Prioritization (APP) process. The Academic Program Prioritization Implementation Committee (APPIC) on Jan. 13 released the “Shape of the College” draft document, which recommends cutting 116 full-time equivalent faculty positions, along with the elimination of 26 majors, departments and programs.

The Open the Books Coalition is a group of college community members who are asking the college to prove that faculty and program cuts are necessary, slow the APP process and look into alternative solutions. The group first held a protest against the APP in November 2020 after the college initially announced the impending faculty cuts.

The group of approximately 30 held the Feb. 8 protest on the sidewalk along Route 96B near the main entrance to the college. Protesters gathered at 8 a.m. with masks and lined up along Route 96B with signs while social distancing. Junior Julia Machlin said the Open the Books Coalition decided to hold this protest because the Senior Leadership Team (SLT) will be making final decisions about faculty and program cuts at the end of February.

Junior Kellie Swensen said she felt it was important for her to attend the protest despite the 3-degree weather to show support for her professors.

“Honestly, the care, the dedication and the support that our professors have shown us, really, like you can’t put a price on that,” Swensen said. “So yes, I am out here freezing my butt off because that means everything to me, and they’ve really made my experience at IC amazing. They are what makes IC so great. It’s the people. It’s not the administration.”

Junior Ana Maria Arroyo said she attended the protest because she understands the effects of the APP from personal experience. Ana Maria Arroyo is the daughter of Juan Arroyo, assistant professor in the Department of Politics, who has been notified that his position at the college may be cut.

Arroyo said it was meaningful to see people protest in support of faculty like her father.

“It reminds me why I love Ithaca so much,” Arroyo said. “The best parts of Ithaca come from the fact that it’s a college town. We’re one huge community that’s been bolstered so much by Ithaca College and Cornell, and to see the community come and give back, it’s just so wonderful.” 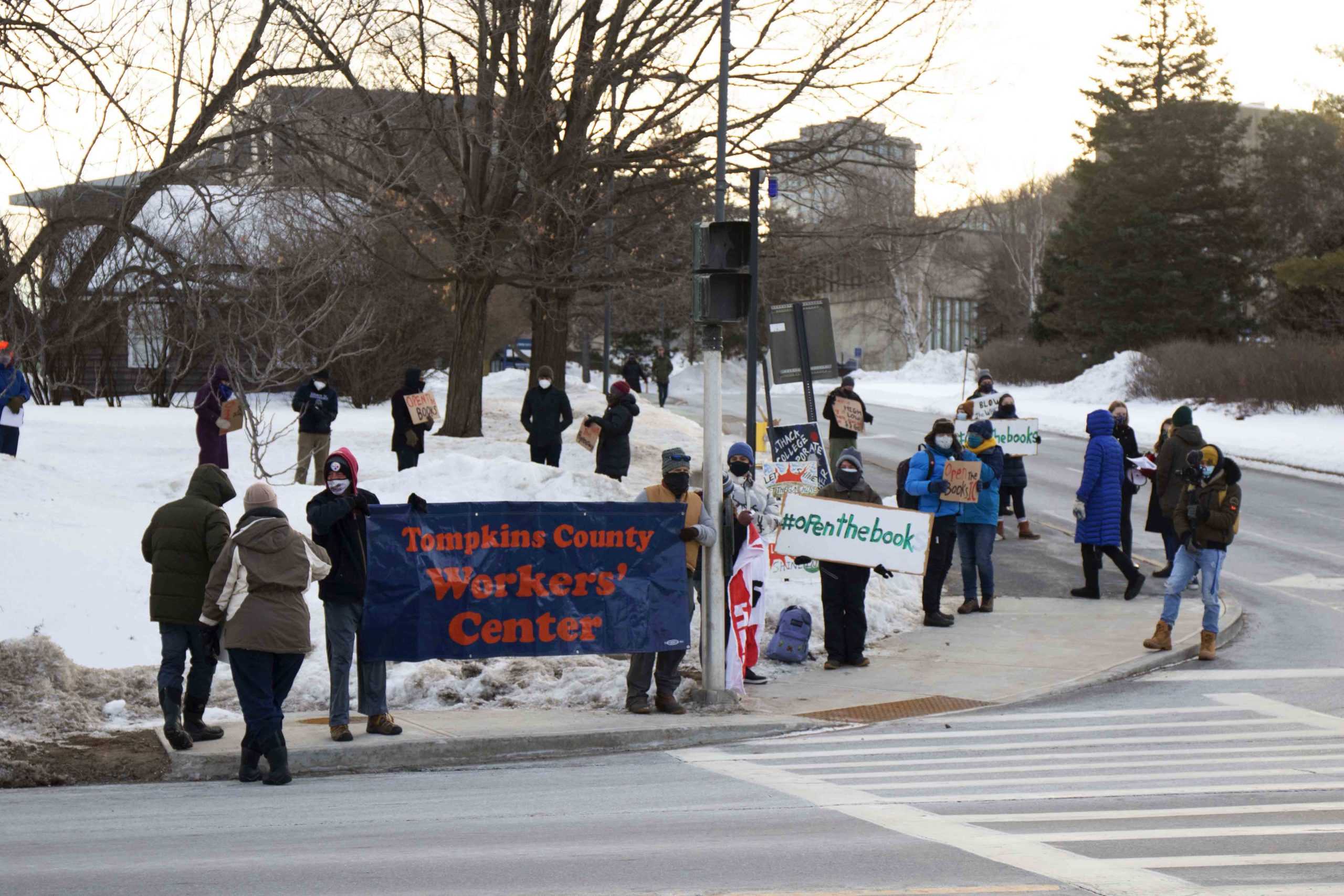 Students, alumni, faculty, staff and community members line up along Route 96B at the entrance of Ithaca College on Feb. 8 for the “Day of Action Against Austerity.” Ash Bailot/The Ithacan 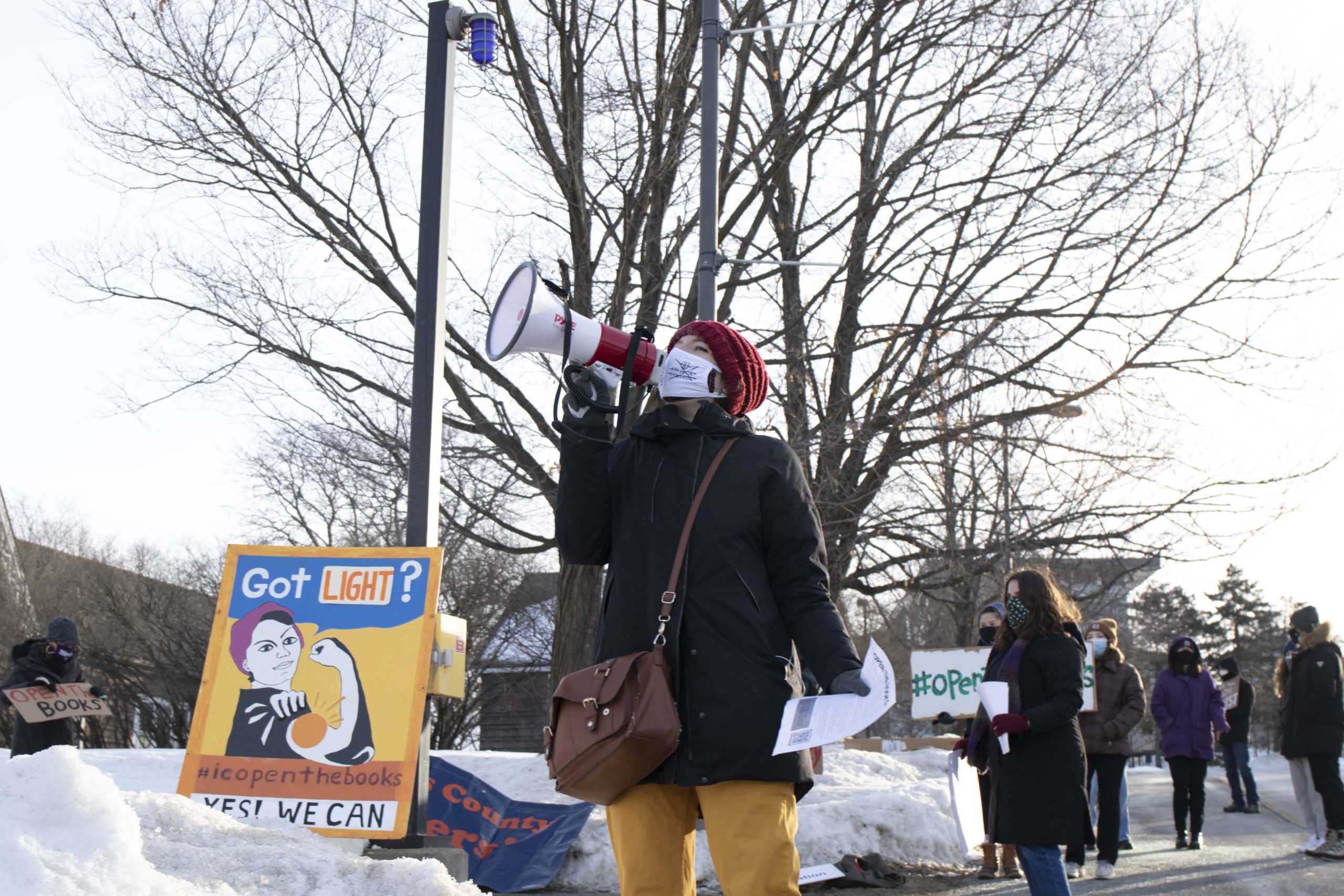 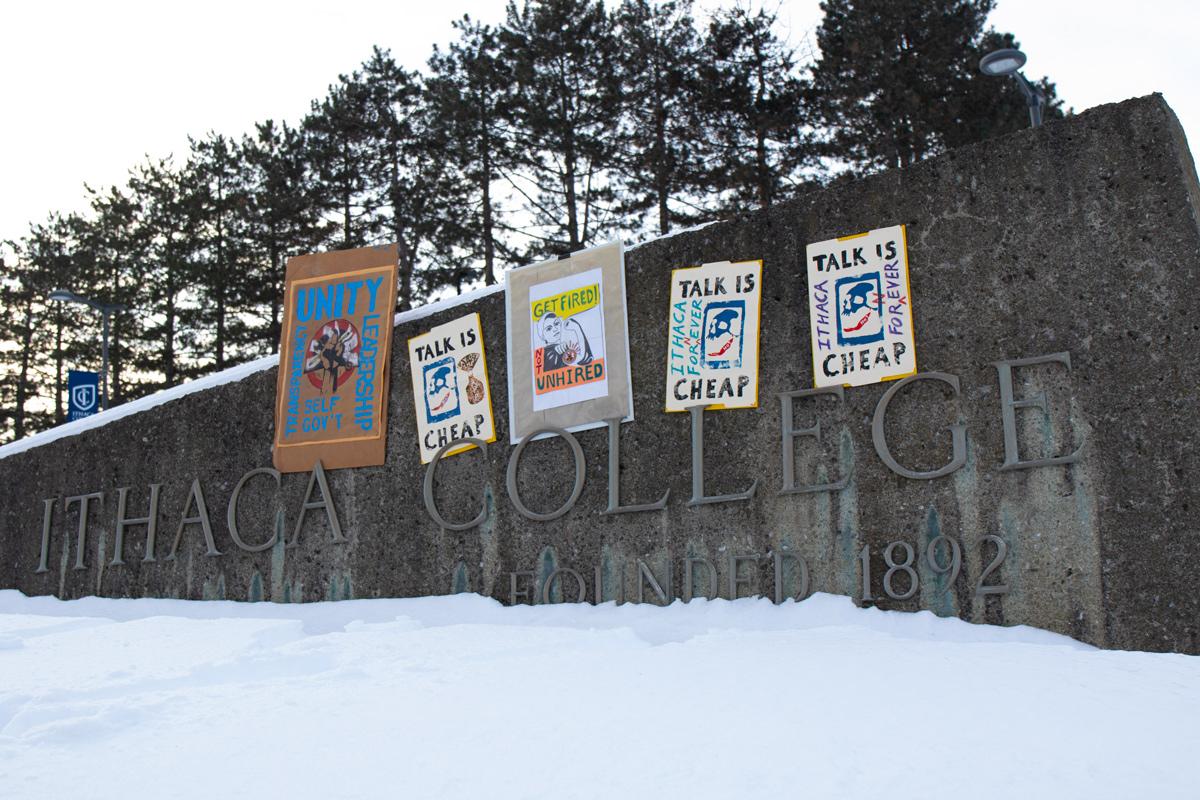 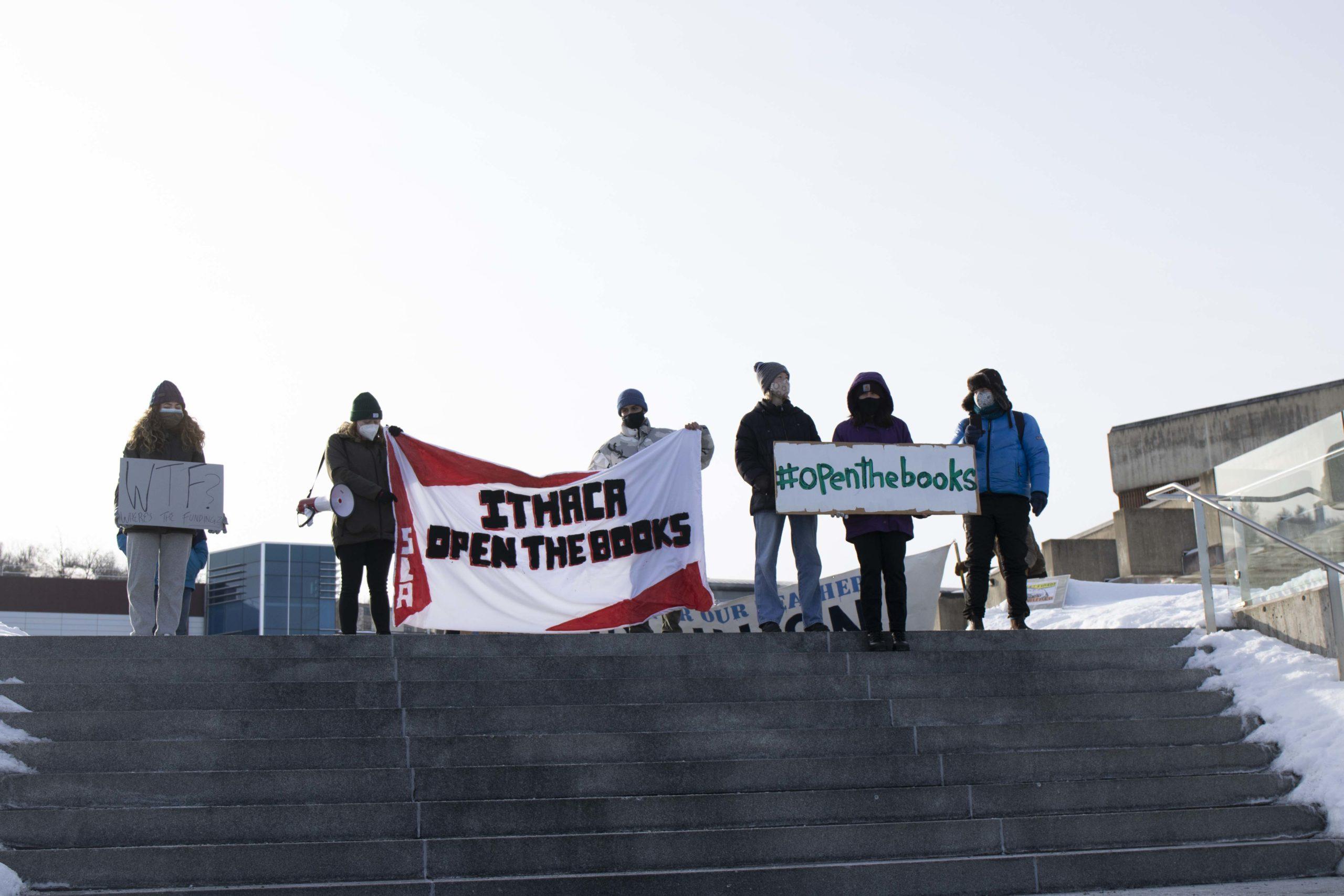 Approximately 15 protesters walk past the Peggy Ryan Williams Center and hold up signs near the fountains at 9 a.m. Feb. 8 after the rally at the entrance of the college. Ash Bailot/The Ithacan 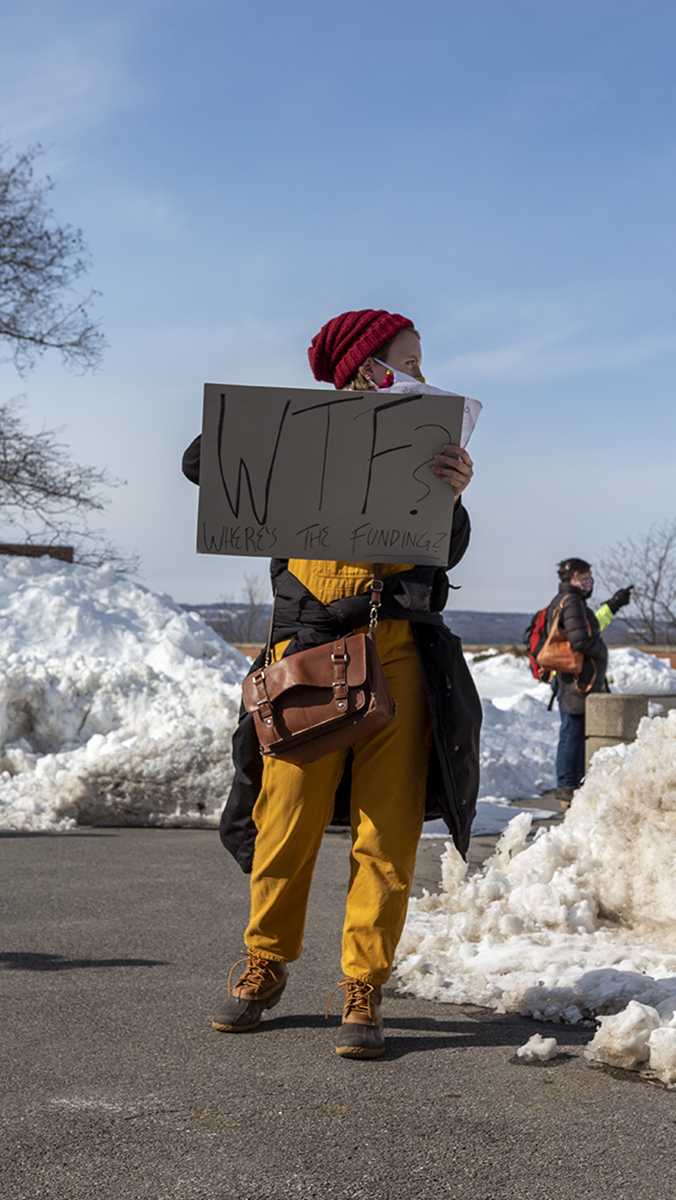 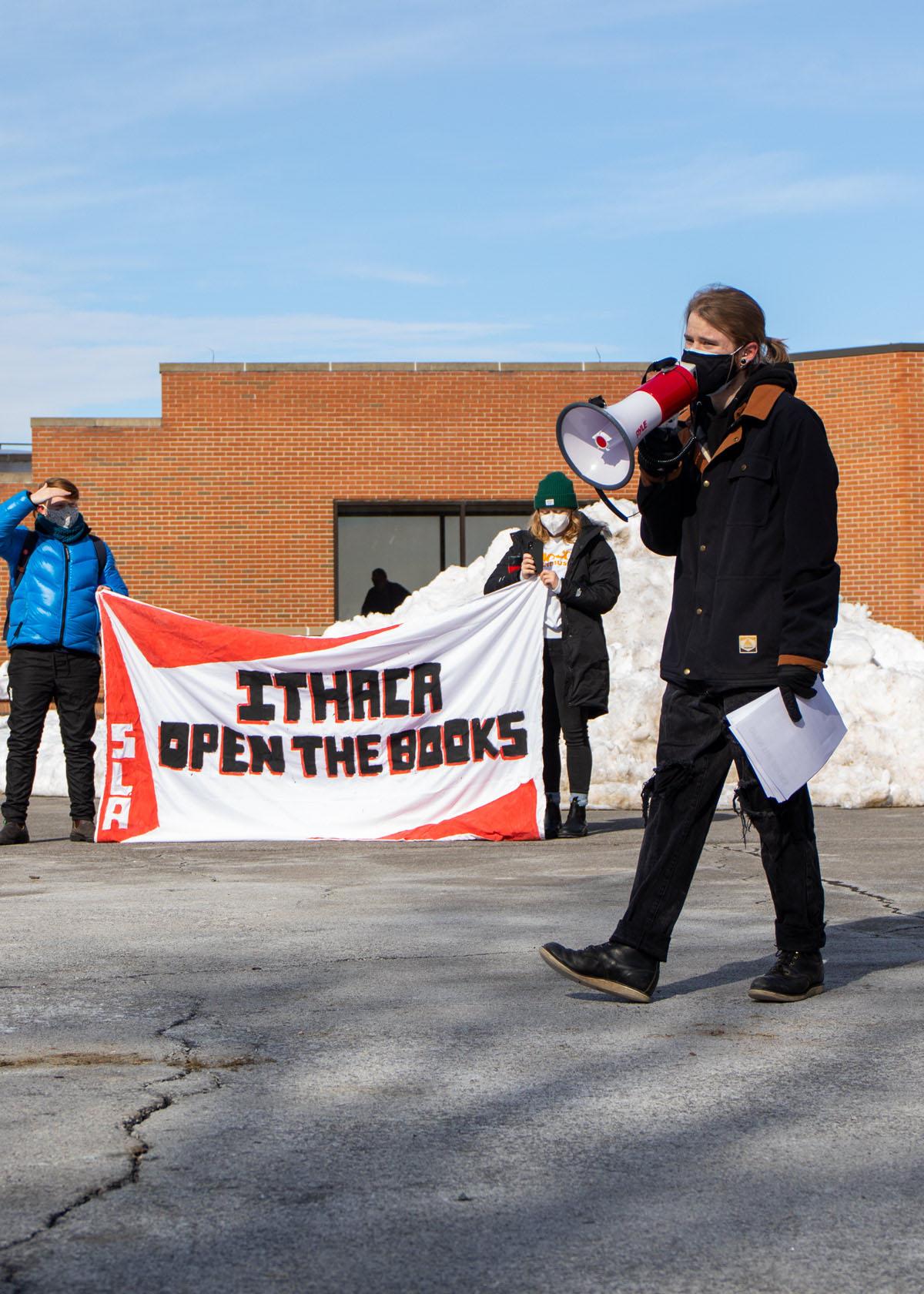 Following the 8 a.m. protest, the Open the Books Coalition held a rally at noon at Free Speech Rock, which approximately 40 people attended.

The organizers explained what the Open the Books coalition is and encouraged the attendees to call President Shirley M. Collado and other members of the administration to tell them how they feel about the APP process.

Dave Maley, director of public relations, attended the rally and said he thinks it is important that both the SLT and college community members listen to opposing viewpoints.

“There is often misinterpretation and certainly more communication is better and both sides need to be listening and not just speaking,” Maley said. “I think the college has been listening. The college has been trying to listen, trying to listen to feedback and trying to consider all of the ramifications of what is being planned for and recommended and what will ultimately be decided on. These are not easy decisions.”

The rally then extended to the walkway leading to the Campus Center, where supporters listened to several speakers. Speakers included junior Sebastian Chavez, Students of Color Coalition senator for the Student Governance Council.

Chavez said he is working with the Open the Books Coalition on a bill to redesign what power looks like on campus and how it should be distributed across the college. An example he gave included letting students decide what the college’s money goes toward. Bill Guerrero, vice president for Finance and Administration said there are two students on the Institutional Effectiveness Budget Committee and a student member of the Board of Trustees.

Junior Julia Ganbarg attended the rally and said that she thinks most people on campus support what IC Open the Books is doing and that there is real power in the number of people who show up.

“Visuals, optics are everything,” she said. “That’s mainly why I’m here to come out of my room for just half an hour and show my face.”

Ganbarg said it is upsetting to see faculty members getting cut. She said her adviser and one of the professors who helped her decide to join the Women and Gender Studies minor are on the list of faculty who may be laid off.

“Ithaca prides itself on listening to its students, and I think this is one of the crucial times where we’re ready for the administration to put their money where their mouth is and see if they’re actually going to listen to us and what we’re saying,” Ganbarg said.