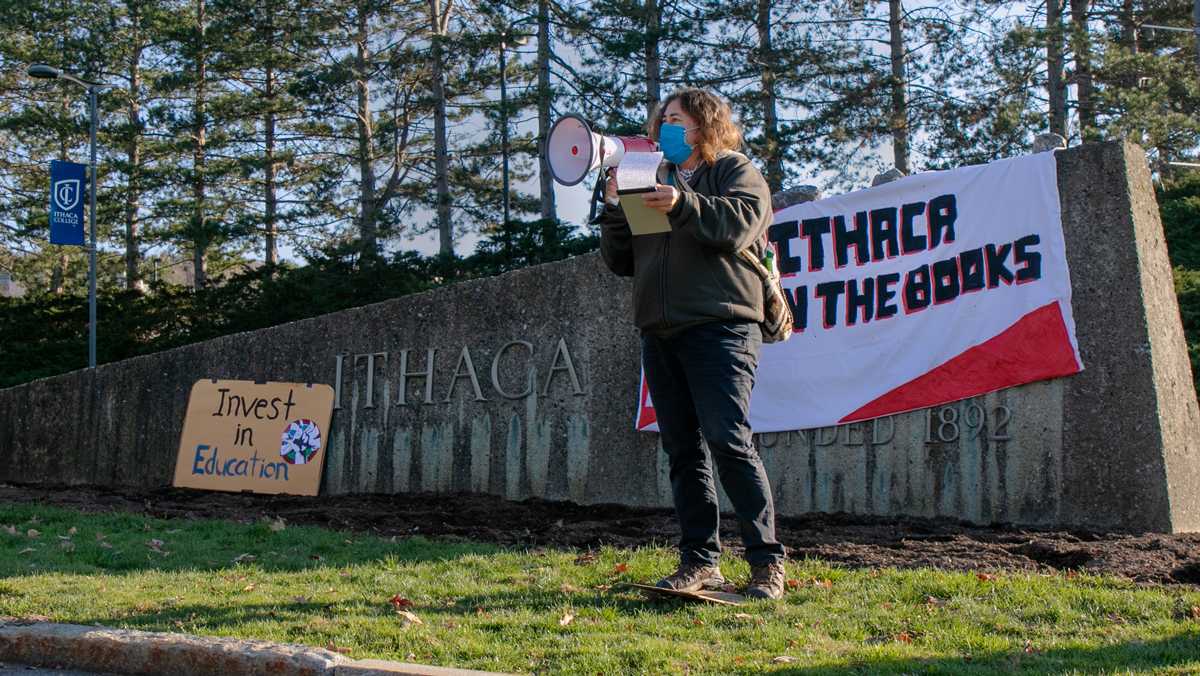 A group of students, faculty and community members convened at the entrance of Ithaca College on Nov. 14, where they chanted, “Open the books!” and held signs that read, “Rich Administors Poor Professors” and “Chop From The Top.” The crowd was protesting the administration’s decision to cut approximately 130 full-time equivalent faculty positions.

The protest was organized by the IC Students for Labor Action (SLA) and the Tompkins County Workers’ Center. Senior Tali Abraham, a member of SLA and an organizer of the protest, said the purpose of the gathering was to demonstrate the college community’s dissatisfaction with the administration’s handling of faculty, staff and program cuts. At an Oct. 6 Faculty Council meeting, La Jerne Cornish, provost and senior vice president for academic affairs, announced that approximately 130 full-time equivalent faculty positions will be cut because of decreased enrollment.  Since the announcement was made about the cuts in early October, members of the campus community have expressed their dissatisfaction with the decision. Abraham said that they, and many of the attendees at the protest, feel that the current Academic Program Prioritization (APP) process excludes faculty, staff and students from the decision-making process. Abraham said they take particular issue with the college’s lack of financial transparency. 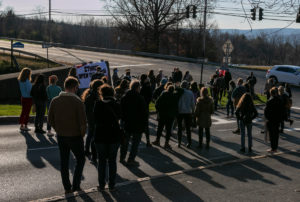 On Nov. 14, students, faculty and community members convened at the entrance of Ithaca College to protest the administration’s decision to cut faculty positions. Ash Bailot/The Ithacan

Growing from a small gathering to a robust crowd of approximately 100 people, protesters shouted and clapped in response to organizers’ speeches about concerns with the APP process. The rally took place near the Peggy Ryan Williams Center — where the administrators’ offices are located — and drivers honked their horns in support as they drove down Route 96B. Members of the crowd also wrote messages in chalk on the sidewalk and road, like “Stand behind our professors” and “Solidarity not austerity.”

The phrase #OpenTheBooks was coined in a letter that requested shared governance and transparency during the APP process. The letter was written by a coalition of faculty, staff, students, alumni and community members and began circulating earlier this month. The #OpenTheBooks letter also expressed disappointment with the college’s inconsistent and misleading reasons for the cuts. As of Nov. 15, the letter has 691 signatures.

Two groups — the Academic Program Prioritization Implementation Committee (APPIC) and the Academic Program Prioritization Advisory Committee (APPAC) — will work this semester to decide the future of programs at the college. By Dec. 31, APPIC and APPAC will create a document called “The Shape of the College” that will recommend the departments and programs to be cut, consolidated, reorganized or grown. Deans, faculty, program directors and department chairs will review the document and provide feedback to the APPIC in January 2021. The document will then be delivered to President Shirley M. Collado and Cornish in early February, and they will make decisions about programs by the end of February.

On Oct. 18, the Faculty Council Executive Committee (FCEC) wrote a letter to the administration criticizing its decision to make these cuts during the pandemic. Students have also expressed their concerns that other options are not being explored.

No members of the administration were present at the protest. Dave Maley, director of public relations, said that consolidation, elimination and reorganization of certain programs are necessary to enhance the college’s strategic plan and address issues caused by the pandemic.

“In accord with the principles of shared governance, the administration has taken a collaborative approach throughout this data-driven process, engaging the faculty and incorporating their feedback,” he said via email. “We will continue to take a student-centered approach, consistent with our stated vision, mission and values, to ensure a strong and vibrant future for Ithaca College.”

These firings come atop of the at least 264 staff members who were furloughed since March, with cuts still happening until the end of the semester. In her speech at the rally, Patricia Rodriguez, associate professor and chair of the Department of Politics, said she saw anonymous comments on the #OpenTheBooks signature page saying that faculty members in smaller departments should be cut because they are less productive. 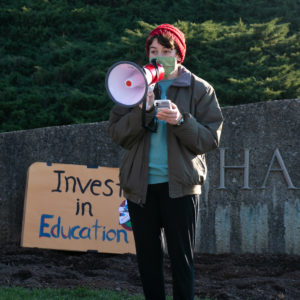 Rodriguez also said she thinks the college’s use of community language like “we” and “our” in its statements makes the cuts falsely sound like a collaborative decision. In an Oct. 19 message to faculty, staff and students, Collado wrote, “We want to pause right now and talk about why we are moving through this crucial moment in our history and how our current decisions will strengthen our beloved Ithaca College in the near and long term.”

“I call for us to stop using the language of community and resilience so freely,” she said. “This is the time to scrutinize this education model, to demand change, to demand public discussions and not talk–down sessions over webinars. … It is time for us to flip that around and not accept anything less than a full examination of the books and the inequities of this system.”

One of many faculty members attending the rally was Dan Breen, associate professor in the Department of English. He said that the looming cuts make him uncomfortable.

“We have to ask ourselves, given that the plan is currently to cut 130 [full-time equivalent faculty] and a further unspecified number of staff, are we, as the college community broadly constituted, OK with this?” he said. “I can’t answer that question for the community, but I can answer it for myself, and I’m not OK with it.”

Members outside the college’s community were also present at the rally. The Cornell University chapter of the American Association of University Professors was in attendance. The AAUP has also spoken out against the university’s implementations of furloughs during the COVID-19 pandemic.

Throughout the afternoon, the crowd also heard rallying speeches from Abraham, Ithaca College junior Julia Machlin and junior Sebastian Chavez, Students of Color Coalition senator for the Student Governance Council, with a statement of solidarity. 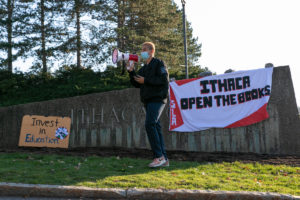 In his speech, Chavez said that the administration should back up its words with action.

“Being transparent is hard, and it’s messy, but sometimes we face the reality of the situation and share the reality with our community because we deserve to know what’s going on at our college,” Chavez said.

Machlin and Abraham also read anonymous statements from faculty members who were afraid to speak publicly out of fear of losing their jobs.

Sandra Steingraber, distinguished scholar in residence in the Department of Environmental Studies and Sciences, said it was nerve–wracking to be the face for faculty members going public about their concerns. “I love this place,” Steingraber said. “It’s out of that love now that I stand in solidarity with my fellow faculty and staff members and Students for Labor Action in protesting the inhumane austerity measures that are promoting anguish and chaos across our campus.”

James Miranda, lecturer in the Department of Writing, called on the administration to invest in its current faculty and criticized language the college has used — like “bold” and “nimble” — to describe the strategic plan and APP process. 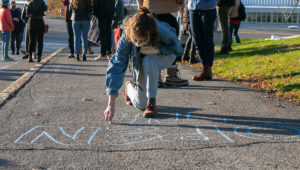 “If you want to be bold, if you want to be nimble, then what you should be doing right now is thinking about radical inclusion,” he said. “How about being the one institution that actually does that at this time? How would that play as far as PR?”

Senior Carmen Enge, a member of SLA, attended the protest, carrying a white sign that read “WTF? Where’s The Funding.” She said she wants the college to be more transparent with the Senior Leadership Team’s (SLT) current salaries.

Collado and other members of the SLT have publicly announced that they reduced their salaries for the 2020–21 fiscal year but have refused to disclose their salaries and the amount they were reduced to The Ithacan.

“Until they do give exact numbers … it can take movements to bring forth productive change,” Enge said. “[The administration has] been talking, but they haven’t been backing it up with action to show that what they’ve been saying is actually helpful.”

Machlin said she was pleased with the turnout at the rally.

“I hope that first and foremost, [the administration is] willing to open a dialogue,” she said. “It requires the least amount of effort on their part, and I hope that we do get to see the financial records that ‘open the books’ is all about.”

Correction: A previous version of this article stated Rodriguez said the administration said less productive faculty members in smaller departments will be cut. These statements actually came from anonymous comments in the #OpenTheBooks signature page.